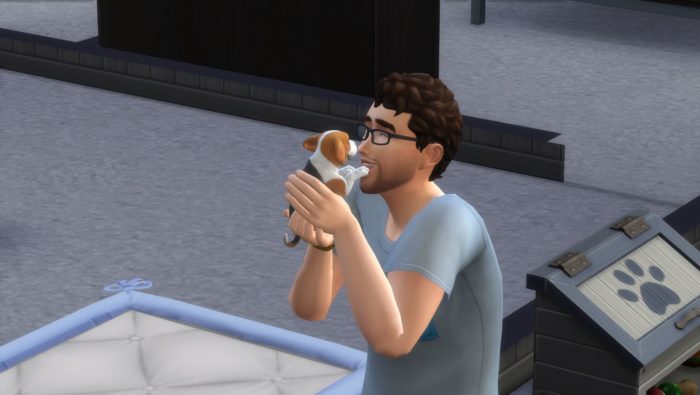 The Sims 4 may have released to a bit of pushback from the community, but it’s been well on its way to impressing the fanbase yet again. Hot on the heels of a major update to the game is the release of the anticipated pets expansion pack, The Sims 4: Cats & Dogs. Is this an expansion you’ll need to add to your collection, though? Let’s break that down for you.

The expansion pack adds the usual flair of Build & Buy objects, clothes, and hair for your Sims. Those are all additions you get within Stuff Packs. The real meat of Cats & Dogs is the gameplay add-ons it brings. Brindleton Bay is a beautiful bayside town with a beach (something a lot of fans have been wanting). The Vet Clinics you can own add a whole new level of gameplay to running the standard businesses. And last but not least, of course, there are pets now (that, again, fans have been wanting for awhile).

Let’s talk about Brindleton Bay, first. Oh my God, y’all. I couldn’t help but stop and stare at the bustling background happening behind my family when I moved them to the center of the town in Wishkerman’s Wharf. That area looks like a total bayside town and the architecture for some of the buildings is really fresh. Most simmers will probably replace it with their creations, but props to EA for making a two story house I actually wanted to live in. Oh, and the flocks of birds that you can chase for a cute hidden mini-game, you guys.

It’s not all hustle and bustle, though! The world ranges from the town square to the lighthouse. For example, there’s Sable Square that has the river spilling in and flowing through the middle of the nice and quiet suburbs. It even has a pet park for you, complete with a lot trait that attracts dog owners and their best friends. The new lot traits, as well as the traits for Sims, complement the entire shtick of the game with ones that make your pets breed more, ones that help your pets train faster, ones that attract either cat or dog owners, and ones that attract cat or dog strays. Sims’ traits include Dog Lover and Cat Lover, by the way.

The entire world of Brindleton Bay is really worth it alone, in my opinion. But I’m also a major beach head that appreciates being able to take a jog with my dog down close to the water.

Also, it’s like Maxis decided to make the most attractive townies they ever made for this world.

I found myself saying, “This is worth it alone,” a lot.

The first thing I tried out was running a vet clinic. I had enough to just buy the Pawspital that came pre-made, so it was really more like a vet hospital. The next thing I knew, I had spent three hours running it. Confession time: I never liked running a restaurant or a retail store. However, with the vet clinic, I actually want to show up when the business is open. I loved greeting patients, taking their sick (or not even) pets, examining them in different ways until I had enough clues for what the illness was. I only have two critiques for this part of the game.

The first, I wish it would only clue you in on what could be wrong and then have you decide what medicine to use. Having the answer spelled out for you with thumbs-up or thumbs-down is too easy. I’m sure the modding community will find a way to make this more challenging, though. The second critique is about the surgery table. I very rarely even had to use it on any pet, which is unfortunate, because it’s pretty cool and would break up the examining table monotony. Still, though, it’s the best business they’ve added into the game, and “worth it alone.” Watching cats freak out when you examine them is hilarious, too.

The cats and dogs (and foxes, dingos, and raccoons) added into the world are exactly what you’d expect if you ever played The Sims 2: Pets. You can’t control them like you could in The Sims 3, but nonetheless they add even more life to the game. Your sims don’t have to be totally alone in a house if they don’t want a roommate anymore. They can just buy a ton of cats and become crazy. You could become a dog breeder that sells off your pets’ offsprings. Maybe even make a post-apocalyptic house where dingos are your protectors? Or, you know, you can just be a regular family with a dog and a cat now.

More options means more gameplay possibilities for simmers, and we all know how much we love making up stories. With The Sims 4: Cats & Dogs, the missing piece to any household that needed a pet is finally filled. And even if you don’t care about that, there’s enough in The Sims 4: Cats & Dogs to make this one of the best expansion packs you can get to date.