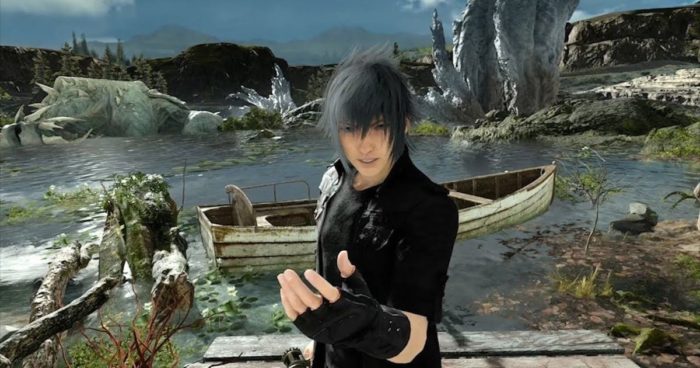 Monster of the Deep: Final Fantasy XV on PlayStation VR

Final Fantasy XV has seen a wealth of spinoff content since launch, with everything from a multiplayer expansion to a chibi mobile version of the game. Monster of the Deep is certainly one of the more curious offerings: a VR game entirely focused on fishing enormously proportioned aquatic monsters. As ludicrous as that all sounds, Monster of the Deep ended up being a pleasant surprise, drawing me in far more than I expected it to. Though there are issues at times, when everything clicks into place, the game is an absolute blast.

Monster of the Deep casts you as a hunter who also happens to be a fisherman, tasked with taking down dangerous daemonfish and making the waters of Eos safe again. Much like the recent multilayer expansion, Comrades, you get to create your own avatar and customize their look. Your journey begins from your hunter’s cabin, a cozy little abode filled with different fishing gear and memorabilia. From there, you can undertake various story quests, take on hunts, compete in tournaments, or just head to a fishing spot for some leisurely sport. Monster of the Deep’s story mode is where you’ll want to spend your time at first, getting introduced to the various mechanics of the game, while meeting the familiar faces of Final Fantasy XV along the way. 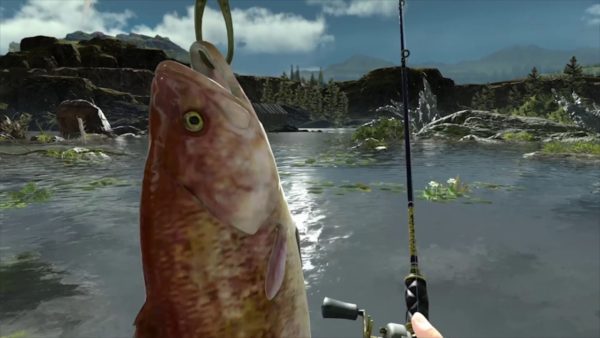 As with many VR games, Monster of the Deep is played from a first-person perspective. You roam around small open areas and looking for different fishing spots to cast your line. A sonar mapped to the L2 button lets you send out a wave that detects nearby spots with fish. Looking around moves a blue cursor around the world, and you just need to hit X to move to the spot you’re looking at.

Fishing itself functions mostly the same as in Final Fantasy XV, both in casting and reeling, although things are mapped to motion controls this time. The game can be played with either a DualShock 4 or PlayStation Move controllers, and while the move controllers might help with immersion, the DualShock works just a well. You’ll need to move your controller like a fishing rod in order to use it, winding up and then throwing out your line. Initially, you need to hold down the circle button as well to throw, but an easy casting option in the menu was a godsend for me. This allowed me to simply cast my line by flicking up and down, instead of also having to hold down a button.

The game has you cast your line in specific areas highlighted by circles to find fish, and once one has snagged your line, you reel it in by rotating the analog stick or using the Move controller. Like in the main game, you need to move your line left and right in the direction of the fish to keep them hooked. Once you’ve snagged a fish it’s a thrilling experience, making you furiously use your controller to reel in, swaying back and forth with the fish itself. This is, of course, only when you manage to actually land a fish.

The biggest frustration I had with Monster of the Deep was with casting my line, as it seemed to work right only when it wanted to. There’s something off about managing the distance of your cast, and it’s almost impossible to really nail down how to make your throw exact. Sometimes a slight flick of my controller would send my line flying far out in the distance, whereas other times, a hard throw would send it hardly any distance at all. For the most part, a few casts get you where you need to, but if you’re trying to nail a particularly small area with fish or somewhere far off this can be incredibly frustrating. You’ll often need to repeatedly cast your line over and over to get into the right spot. For both the good and the bad, Monster of the Deep simulates the tedious aspects of fishing.

While the main loop of fishing is fun enough, the game really shines when the main story introduces its ridiculous daemonfish boss battles. In each area, players must capture a certain amount of fish to make the daemonfish appear, at which point you’ll need to blast it with your crossbow before you can catch it. The ensuing struggles are truly harrowing, as the daemonfish are incredibly fast and each one has their own distinct attacks and maneuvers. It’s admittedly scary to see a giant daemon shark rushing right into your face in VR. The crossbow shooting is surprisingly precise, and each daemonfish encounter is a very well designed boss battle. These battles alone are more than enough incentive to see the entire story through, and more than once I found myself breaking a bit of a sweat after a ten-minute bout with one. 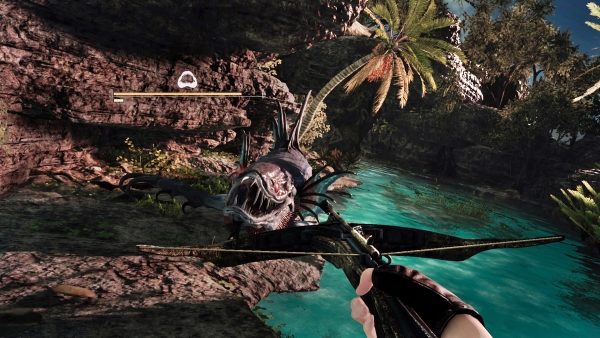 Monster of the Deep’s narrative and its boss battles are the most compelling aspects of the experience, but there are other modes to explore too. Sadly, though, these aren’t nearly as fun. There’s a number of items to buy in the game, such as different lures, lines, rods, and clothing. Players must earn gil to use these items. Unfortunately, the only way you can get gil is by taking on Hunts, which send you to a specific area to look for a special fish and catch it. It’s a bit disappointing that you don’t earn gil through the main story, letting you purchase a few things without digging into the hunts. As for the other modes, tournaments are fast-paced score challenges that test your casting skills and leisurely fishing is great to just kick back and relax. But there perhaps isn’t as much substance to these offerings as there should be.

Of course, while you’re on your journey you’ll meet Noctis, Cindy, Prompto, and a handful of other characters. It’s interesting to interact with these characters in VR, and seeing them from this point of view is pretty unique. Character models are all rendered pretty well, and look impressive up close. In fact, across the board, Monster of the Deep is fairly impressive graphically. Up close textures are fairly detailed, especially for water effects, fish, and various monsters you come across. While individual models are good looking, though, foliage and objects in nature can be a tad bit block or stiff at times. The game also suffers from some of the same problems that other PSVR titles do, with blurry textures to the sides of your view and in the distance. Even so, each area in the game is lovingly rendered, and that makes roaming around immersive and engaging.

Part of what made Monster of the Deep such an engaging experience for me was just being able to inhabit a Final Fantasy world; to see its epic creatures up close and immerse myself in its gorgeous environment. For anyone that’s a fan of the main game, this is certainly going to be a huge draw. That being said, if you either weren’t a fan of the fishing minigame in Final Fantasy XV or you don’t enjoy fishing in general, Monster of the Deep isn’t going to convert you. 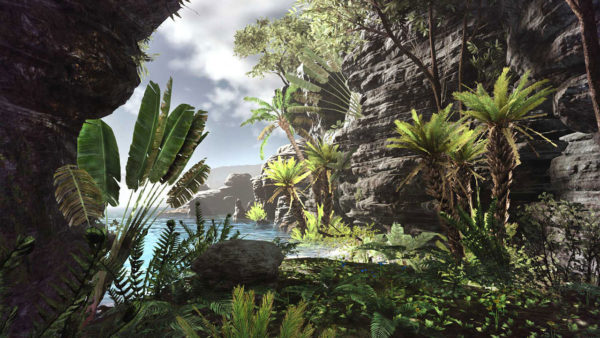 As much as I loved just being in the world of Eos and fishing, there were a few nagging issues that broke my immersion every now and again. The animations for your character model can definitely be wonky at times. Your avatar’s arms, for example, seem to jut out from your character unnaturally, and there were a few times that I loaded into the game with a headless character model in front of me, which could only be fixed by resetting the screen. Occasionally, my character’s arms had a mind of their own at times, too. They’d snap in weird directions or bend, or fail to move the way I was trying to while casting. Not only does this look strange, it can also interfere with the direction of your cast.

There are even more baffling issues in Monster of the Deep, though. Sometimes when reading a note or letter, the text that pops up runs off of the page and onto the rest of the screen, making it hard to read. It’s super jarring and totally breaks your immersion. At the same time, I was blown away to find out the button prompts that popped up on my screen for yes and no in conversations were actually reversed. While the screen read X for no and circle for yes, it was actually the opposite. These conversation options don’t alter much of anything, but it’s such a small glaring error that I can’t help but focus on it. Ironically, there also seems to be a music player option while you’re out fishing, but after all my time with the game, I could never figure out how to use it.

Despite some persistent technical issues that dragged down the experience, Monster of the Deep is surprisingly ambitious, and one that I did not expect to enjoy as much as I did. I can only hope Square Enix is able to smooth out the game with subsequent patches because I was a little taken aback at the lack of polish in certain areas of the game. The inconsistency is somewhat strange, with obvious issues like the text and button prompts juxtaposed against other areas that run very well. Ultimately, if you love the world of Final Fantasy XV, Monster of the Deep is an experience that actually lets you step into that world in a unique way. Just be aware that this fishing trip isn’t without its share of frustration, and not because of the lack of bites.