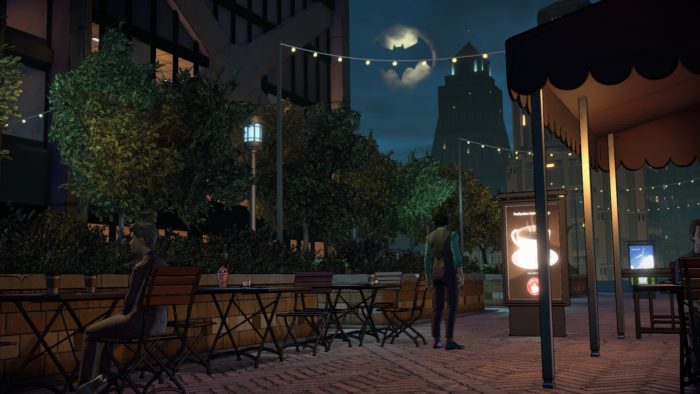 Batman: The Enemy Within – Episode 3 on PC

Telltale’s second season of Batman has certainly been surprising me since the start of the series. With a much greater focus on Bruce Wayne rather than the tough-as-nails, no-nonsense vigilante hero, Telltale has managed to weave a tale of underworld crime and drama that’s been a joy to follow so far. And that trend continues with Fractured Mask, the third episode of the second season.

Following the reveal of Catwoman’s involvement with the Pact at the end of the last episode, Fractured Mask places a very large focus on the relationship between Bruce and Selina. A good portion of the episode is spent on the player’s ability to tread a fine line between trying to feel out Selina’s intentions, while also carefully maintaining the undercover guise while the other villains are hanging about. It’s a fun and tense little segment that’s only made even better by the chemistry between these two characters. Depending on your choices from the first season, Selina will make subtle comments about the relationship Bruce may or may not have shared with her.

While my version of Bruce had kept things strictly professional during my season one story, the circumstances surrounding his reunion with Catwoman made the idea of a secret romantic tryst far too enticing to pass up. The trick is knowing how to make Bruce’s intentions clear, while also avoiding John’s suspicious eye.

Speaking of John, episode three certainly worked hard to keep him in the spotlight as well. Whereas he spent the last couple of episodes kind of in the shadows, being another character you could manipulate to your own will, episode three makes your choices feel a little more weighty. Apart from keeping a keen eye on Bruce and Catwoman in a particularly exciting and hilarious fight scene involving snapping quick images with a cellphone, we also get a glimpse at the darker side we know he’s hiding. John’s own mask begins to slip as players get to play a crucial part in shaping the kind of character he becomes, and it’s up to you whether you want to try to keep him docile or egg him on to his more chaotic and unpredictable side.

While this character development is definitely interesting to watch unfold, it still remains to be seen whether any of this will ultimately amount to anything by the end of season two. Telltale has been teasing John’s Joker transformation for a long time now, but with only two episode left to go in the season, it’s looking like he’ll only really start to become the villain we all love to hate in a later story perhaps.

At least your interactions with Catwoman are interesting enough to keep things moving along. Again, players are presented with a choice to either keep her at arm’s length as a work partner or pursuing something more intimate. It’s a big decision that determines Bruce’s own character development as well. While I had chosen to keep my distance in the first season, it seemed appropriate to trust Selina a little more this time around, given their history. Being able to get Bruce to open up and let someone into his life was a strangely satisfying and cathartic moment this episode, and it’s one of the biggest highlights of this season thus far.

That being said, Batman: The Enemy Within has once again fallen into the classic Telltale trap of making the player feel like the decisions don’t matter. Towards the end of the episode, a brief interaction with Tiffany (remember her?) prompted me to let her in on a little bit of what was going on with Bruce, but I opted to keep his identity as Batman secure. While Tiffany had shown some appreciation at Bruce’s willingness to share, it was very off-putting to see her immediately turn heel and get defensive two seconds later when I’d hesitated to explain why Waller and the Agency had such a tight hold on him.

Similarly, the final decisions you get to make at the end of the episode feel disappointingly shoehorned in, as if Telltale had decided that episode three needed another ‘major’ decision to close things off. The final decision of Fractured Mask felt like a one-sided affair that had me questioning whether any of my previous actions in episodes-gone by had any real consequence.

I am still heavily invested in the story of Batman: The Enemy Within, and I’m excited to see how things develop from here. But little niggles like inconsequential ‘big’ decisions still feel too heavy-handed and put into the story for a bit of shock value that doesn’t really amount to much in the end.