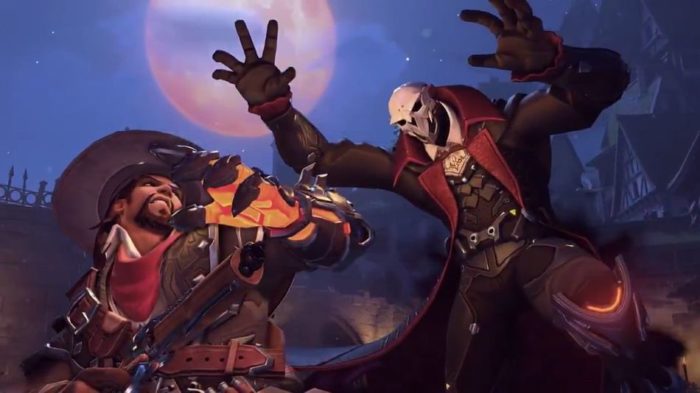 Today marks the final day for Overwatch’s second Halloween event, after which fans can say goodbye to Junkenstein once again and go back to their regularly scheduled battles. Now that the event is ending, however, it’s worth taking a hard look at Junkenstein’s Revenge and giving credit where it’s due. Not to mention, offering some handy critiques for next year when the mode will invariably return.

First off, it’s worth praising just how well-designed Junkenstein’s Revenge actually is from a game design perspective. A good number of players have criticized the mode for being unfair or having heroes who are too weak to handle it, but that couldn’t be further from the truth. Yes, a team of nothing but Soldier 76, McCree, Hanzo, and Ana isn’t ideal, but that’s the point. You’re underdogs fighting off hordes of the Zomnics with the occasional boss there to ruin your day.

It’s tense but never impossible; mainly because the mode is actually very slow and gradual in sending you challenges. Only a handful of bosses actually appear in Junkenstein’s Revenge and never more than one at a time barring the finale with the Witch. Zomnics and Zombardiers spawn regularly, but slowly. Not to mention the Junktires only appear a handful of times, as well. For as tense as the mode can be, particularly on Expert or Legendary, very rarely are you facing more than one thing at a time.

The result of all this is a mode that is actually rather slow-paced and clearly designed in mind for the four characters who, let’s face it, aren’t exactly the best crowd controllers out there. On higher difficulties it becomes trickier as enemies do more damage and become more aggressive, but it rarely feels like there’s a challenge in Junkenstein’s Revenge that cannot be overcome with coordination and some good ol’ fashioned teamwork.

Unfortunately, the same cannot be said for Junkenstein Endless.

Remember all that stuff about slow pacing and deliberate enemy spawns built around a core set of characters? Forget about that. Now it’s time for the game to throw everything on you at once and watch how long it takes for you to die. Which, to be fair, can take a solid amount of time thanks to the heroes exclusive to this version of the game type. Torbjorn ends up as a must-pick thanks to his turret and likewise McCree’s ultimate is too good to not have him.

In concept, an endless version of Junkenstein’s Revenge was a good idea. Pit the skilled players in an infinite survival mode and slowly turn up the difficulty until it becomes unbearable. In concept, it would be a fun test of skill and teamwork. In execution, however, it becomes a terribly annoying mode to play. Especially for those who actually wanted to do so on anything above Hard Mode.

Almost all of Endless’s design faults can be summed up pretty easily; the game throws way too many bosses at you. It very quickly stops being about actual skill and boils down to RNG and how well McCree can get his ultimate off or how well Torbjorn can keep his turret up and running.

Multiple Reapers spawn almost every other minute like gnats with shotguns. Junkenstein’s Monster arrives almost as frequently and soaks up a hundred bullets. The Dragon pops by with a shield generator (whose effects can stack, by the way) because things weren’t bad enough. Junkenstein shows up with some of the most precise, high-damage shots out there. Then, of course, there’s the Witch who will bring almost everyone out to get you at once.

There’s no time to breathe in Junkenstein Endless. Yet, unlike with the regular mode it’s through entirely artificial methods. It feels less like a team-based shooter and more like an MMO raid boss. You want to get through Junkenstein Endless? Alright, go read through the enemy waves, watch a couple guides on how to do it, study the team meta, find a good team, and maybe, you know, play the game at some point. Even though by that point it’ll often fall to RNG just how successful you are.

Overwatch has often struggled to find a good balance between its more casual players and its highly skilled, competitive demographic and this mode serves to highlight that quite well. For the skilled players, perhaps Diamond rank or above, it is doable if not frustrating. For the vast majority below that, however, much of the mode borders on absurdly difficult to impossible.

This is of course optional and players are free to ignore anything remotely challenging about the mode. Yet, hidden behind its higher difficulties were some of the best event exclusive sprays. Which, to some, were must-haves and the fact they were locked behind a poorly-designed game type would infuriate anyone. (And often did.) Considering the main reward for playing Overwatch is cosmetic items like skins and sprays, this can be seen as a pretty major flaw.

A high-difficulty mode being hard is not a bad thing. Making a tense, rewarding experience and offering nice rewards at the end of it is a good idea for a timed event. Though that’s not what Overwatch did here.

Junkenstein Endless’s difficulty is entirely built around spamming high-damage bosses at the player; which wouldn’t be too much of a problem with some other heroes under your belt. With what you have though your only real option for success to coordinate almost exclusively off of McCree’s ultimate attack. Should he die (Which he will) your team just wiped.

There’s a nugget of a good idea buried in Junkenstein Endless, but it needs some serious work. With that in mind, here’s a few suggestions on how Blizzard could improve the game type next time around.

This one’s pretty self-explanatory, really. If the main problem with the mode is there are too many bosses doing too much damage and eating too many bullets, then tone that down some. The main Junkenstein mode can remain the same, but if you’re going to spawn two or three bosses at a time then adjusting the balance accordingly would be a great start.

Between the two, lower health is the better option. Higher damage for higher difficulties is fair. What’s not fair is a boss needing a hundred bullets to die when he can shoot you three times and win.

Another pretty easy way to address the issue. The characters that are in Junkenstein Endless are a good fit in all honesty, but with so much being thrown at everyone a couple more options for different team dynamics is a good idea. Overwatch has plenty of characters who could bring interesting dynamics to the table.

A tank would be the best, offering up a player who could soak up damage while not quite being sturdy enough to rush into the fray on his own either. Reinhardt could be a Barbarian or Orisa could be a Golem. Heck, bring in Lucio as a Bard for an alternative healer. Know who else would be interesting? Mei. Someone who can both freeze bosses and put up walls to protect from the heaviest hitters.

The Dragon showing up and setting a shield generator that makes everything harder to kill is a great idea. Having that effect stack is not. Especially in a mode where two or even three Dragons can spawn at a time. It’s another easy fix, too. Just one shield effect in place and so long as one shield generator is left standing it’ll stay like that. Still a threat, but not making everything virtually immortal either.

Lower the Number of Bosses

Probably the simplest, if not heavy-handed, way of addressing the issue at its core. Just spawn less bosses. Come up with different obstacles that don’t rely on three Reapers or two Junkensteins at a time.

This would perhaps be the most controversial idea to revamp the mode. It’s hard not to look at hordes of enemies thrown at the player and not see a relation to the fact Torbjorn is now playable. Whether Torbjorn was inserted to try and balance out the swathes of enemies or vice-versa, it’s pretty clear the experiment didn’t pan out quite as intended.

If Blizzard opted to overhaul the mode entirely, replacing Torbjorn with someone else and adjusting the balance accordingly would certainly be a valid way to do it.

Mind you, these are just a few simple methods that can go a long way in fixing Overwatch’s Halloween event the next time around. It’s too late for it now, but these are some good ideas to keep in mind going ahead. The game is still a good time and offers tons of thematic content for fans to sink their teeth into, but it could still be so much better. Highlighting these problems is important so that Blizzard can learn from them moving ahead.

Have any ideas for how to improve Overwatch’s PvE modes? Bring them up in the comments below!