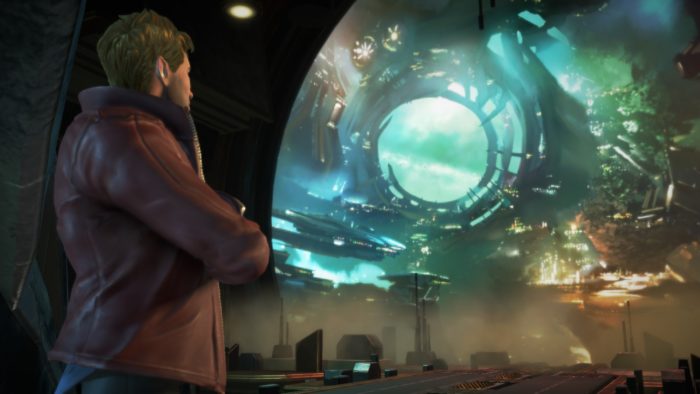 MARVEL’S GUARDIANS OF THE GALAXY: THE TELLTALE SERIES – EPISODE FOUR ON PC

Everyone needs a reason to fight. Even the Guardians of the Galaxy. Something to drive them forward when things get tough. To remind them why they’re fighting and doing all of these incredibly dangerous tasks that have replaced the glamorous, fairly risk-free adventures of the past. Telltale’s Guardians of the Galaxy series has been drip-feeding players these over its first three episodes. Each one has taken the time to analyze what makes them such a perfect fit for this codependent team. Episode four continues to do this, but lacks the depth or fast pace of the rest of the season, leading it to feel very much like the stage-setter for the series finale.

Guardians of the Galaxy episode four, titled ‘Who Needs You,’ picks up right from the moment episode three left off. You’ll ultimately see the results of the massive decision you made and get another glimpse of the relationship between Peter and his mom whose condition only seems to be getting worse. Alas, the Guardians find themselves in yet another tricky situation and the division between them following the fate of the Eternity Forge only adds to the pressure. As such, you’ll spend a lot of your time trying to calm the hostilities and have everyone working as a team once more to escape death. The episode definitely has its high points, with another excellent action sequence choreographed to music and solid writing helping to keep that Guardians of the Galaxy magic at the heart of the experience, but it never feels like it really hits its stride. Constantly holding itself back from letting its momentum carry it in order to save all the really exciting stuff for episode five.

The bulk of this issue lies heavily on the shoulders of Guardians of the Galaxy’s environmental puzzle/exploration sections. They feel clunky, and drag on for too long. It’s the kind of stuff that you didn’t really need to play out yourself, nor does the dialogue between the characters during these ever stand out as these sections’ redeeming factor. They’re slow, a drag, and another reminder that Telltale games are at their best when they’re guiding us through at a blistering pace, rather than relying on simple observation puzzles to stretch out the quality content that is there.

In episodes two and three, Guardians of the Galaxy had shone the spotlight on a few individual guardians, namely Rocket and Gamora (as well as her relationship with Nebula). Episode four marks the turn of everyone’s favorite dopey green warrior to take center stage, and while it definitely tugged at my heartstrings, it’s shortlived. Drax has always been my favorite guardian for the way he takes everything so literally, providing ample comic relief, but also for the simplicity of his plight. He seeks revenge for his family and shows clear remorse for not being able to prevent their untimely demise. Alas, I was left feeling Telltale only scratched the surface of Drax and his motives for joining the Guardians. Whether this was down to something in the fine print of the license agreement with Marvel or not, I’m not entirely sure, but it definitely stands out as the weakest spotlight moment for one of the guardians.

Though episode four doesn’t go a whole way in advancing the overarching story of the series, it still throws some fairly big decisions at the player, forcing you to pick a side and fight your corner. There’s also a particular standout decision clearly meant to be the main massive decision of the episode, but unfortunately, this didn’t quite have the desired effect on me. Where in other Telltale series where I’ve really had to think about the decision I made, fearing the wrong choice could lead to a far-from-ideal outcome, this time I wasn’t phased. I can’t help but await episode five with a sneaking suspicion that it’ll all come up Millhouse, because, well, Telltale has a way of making each player’s unique decisions tell the same story in the end. Perhaps I’ve played too many of their series to fall for their seemingly major turning points, but this one, in particular, seems far too massive for the story to really continue without it being a bluff of sorts.

Though it drags a little during the middle, episode four did manage to hook me back in by the end. I’m intrigued to see exactly how the series pans out considering the state of the Guardians by the episode’s close. In that sense, Telltale has succeeded in setting the stage for its finale, and I’ve now learned enough about most of its leading characters to really care and get behind their cause in episode five. I wouldn’t recommend not playing episode four if you’ve played through the rest of the series up to this point, but don’t expect the same high tempo and depth of character exploration as the first three episodes.