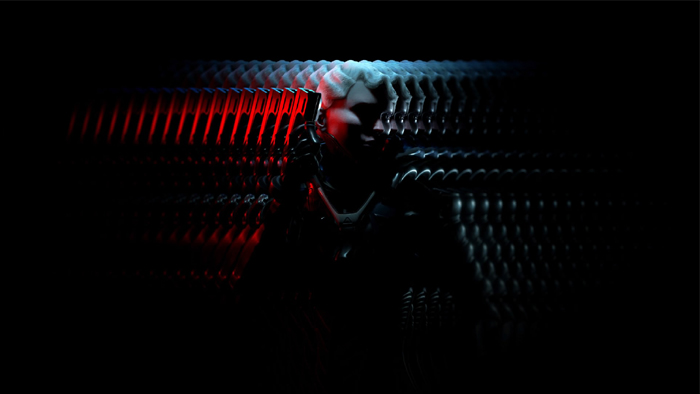 Should I play stealthily, skulking from cover to cover to sneak past enemies while choking a few blocking my way, or go guns blazing? Choosing a certain play style has always been my dilemma in stealth action games that give players the choice how to approach each situation. To my surprise, Echo perfectly balances this mechanic by giving you the most dangerous enemy: yourself.

In Echo, you fight against enemies who are molded with the appearance and traits of protagonist En. In addition, each foe learns certain abilities that you perform through its blackout cycle mechanic. When the lights are on, the palace records all actions performed by En. Smashed someone’s head with a glass? Strangled someone to death? Fired your gun? Good luck. You just taught them a few dangerous moves. Once the palace’s systems reboot, each enemy will know how to bash your head with a glass, choke you to death, and shoot you. Each enemy killed in the previous blackout cycle will also respawn in the exact spot they died, now armed with more murderous skills.

Echo’s blackout system is also a process of unlearning for the AI. Each system reboot will only record actions performed in the prior light cycle, meaning enemies can be lethal predators in one light cycle and brain-dead AI in the next. This can lead to interesting game plans and scenarios. In one light cycle, I ran, smacked, and shot everyone in a heavily-populated area. In the next, I sneaked my way through, not only to avoid getting gob-smacked by skilled enemies but also to make them unlearn their abilities.

In a way, Echo lets players control the game’s difficulty, but difficulty spikes are aplenty and there’s no one to blame but yourself. Throughout its six to nine hour run time, Echo remained a consistent nerve-wracking mind-game where you need to consciously weigh the consequences of your actions. Even simple movements such as running, crouching, opening doors, and dropping down ledges can be learned by enemies. “Do as few actions as you can,” I told myself at first after learning of Echo’s blackout cycles—but before I learned that the large, ornate marble interiors of the palaces are also home to well-designed levels, with each enemy strategically placed to test my skills. It’s a testament that developer Ultra Ultra has talented developers who excel at game design, which is to be expected from a team having former staff from Io Interactive who worked on the Hitman series.

Doing as few actions as you can to make the game less difficult only sounds easy on paper. Sometimes you have no choice but to open doors or traverse the water to reach your destination. However, this also creates more strategic options for players, forcing you to plan accordingly whether you should perform a certain action before or immediately after each blackout cycle. The game also pressures you to teach your enemies new skills as it’s a kill-or-be-killed scenario once you get spotted, and outmaneuvering them will prove difficult and likely lead to your demise when you severely limit your actions.

Echo never fails to impress whenever the game accurately equips all enemies with the abilities you impart, even when traversing from one sector to the next. Sadly, Echo doesn’t feel as polished as it should be. Frame rate issues are apparent whenever plenty of Echoes are visible on-screen. A few blackout occurrences also coincided with the screen freezing for a few seconds, which feels disruptive for a stealth game where positioning and area awareness are crucial. These issues doesn’t creep in too often, but it’s definitely frustrating when it happens.

AI pathing is also quite predictable as enemies strictly follow their patrol route. They’re also deaf to the sound of your footsteps, meaning players simply need to avoid their line of sight. However, Echo’s brilliance in AI programming shines once you get spotted and impart more abilities to them. Whenever this happens, enemies leave their delegated posts and are able to explore more freely while remaining effective at their job to hunt you down. Seeing enemies jumping up and down ledges or opening doors always felt amusing and off-putting (in a good way).

In Echo, carefully treading one’s path and familiarizing oneself with the level layout is crucial due to the lack of an in-game map. In its place is a minimalist HUD that indicates enemy presence and your visibility to them. Worse, once the palace starts to reboot its systems, its well-lit interiors turn pitch black with only a pair of flashlights equipped on En’s shoulders lighting the way, making it difficult to see anything around you. This continual system reboot is accompanied by stellar sound design that makes the palace feel as if it’s a living, breathing entity. The reverberating, pulsating sound of the thumping bass also kicks in once the lights dim, accentuating the dreadful atmosphere. Once the palace successfully reboots, the screen fades to black. Before the lights turn on, the game gives you enough time to ponder if you accidentally positioned your character near a bunch of enemies.

While the blackout cycle is a unique mechanic that revolutionizes the stealth genre, Echo’s gameplay fails to realize this potential. Unlike her other contemporaries, En lacks the combat finesse and fluidity and snappy stealth maneuvers of Metal Gear Solid’s Snake and Splinter Cell’s Sam Fisher. En also doesn’t feel as satisfying to play due to her simplistic movement and abilities. Each action she performs is quite straightforward, lacking the oomph you’d expect from cracking someone’s neck or pushing them off a ledge. Gunplay also lacks complexity, with En using a firearm that can kill all enemies in a straight line with a single bullet. As her movements are mirrored by enemies, the game can feel quite predictable and repetitive.

This doesn’t mean the gameplay isn’t enjoyable as its simplicity highlights the uniqueness of its game mechanics. However, when you’re repeatedly the same missions in the samey-looking palaces, it can get tiring. If missions didn’t consist of repetitive orb collect-a-thons, key acquisition objectives to open a door, and point A to point B tasks, Echo would have been enjoyable from start to end. Nonetheless, the blackout cycle mechanic suffices in spicing up the experience. In addition, when the game starts to feel dragged out, Echo adds a few new elements to partly freshen up the experience. Some sections also serve mainly to provide a change of pace and take a breather from the tense missions, tasking you to simply navigate through inside and outside palaces with no enemies bothering you. It’s during these moments that the game’s storytelling kicks in.

The story of Echo is wholly dialogue-based, with Rose Leslie of Game of Thrones fame voicing En constantly bickering with her ship A.I. London voiced by Nick Boulton (Hellblade: Senua’s Sacrifice, Nioh, Mass: Effect Andromeda). The world building of Echo relies on both characters’ constant engagement, with En providing a great performance in portraying a nuanced, idealistic character who sounds fueled with determination and courage but with enough restraint to leave a bit of frailty and doubt; this is contrasted by London’s cold-mannered personality, focusing on practicality and what’s impossible. Despite its attempt at storytelling, Echo never tries to give enough breathing room for players to catch up with the plot, and the entire tale can sound incorrigibly complex and obtuse for those who don’t pay enough attention. While the story was convincing, it felt like it was written solely to support the game’s intriguing mechanics.

Echo doesn’t overstay its welcome. A full playthrough lasts six to nine hours on average, with collectible items and more punishing difficulties available for those who want to replay the experience. This playthrough length already includes its snail-paced opening sequence that slowly unravels the mystery behind palaces. While frustratingly slow, the opening scenes do a great job in creating a lasting, harrowing vibe for the entire game. It’s not a horror game, but has a frightening feel that permeates the entire experience hanks to its presentation and sound design. The gigantic scale of palaces, while marvelous in scope and design, is something you don’t want to tread in real life.

Echo thrives on its conceptually impressive mechanics and simplistic gameplay, but suffers from repetitiveness. Nonetheless, Echo is an enjoyable game that fans of the stealth action genre should experience, especially when there’s nothing like it in the market.