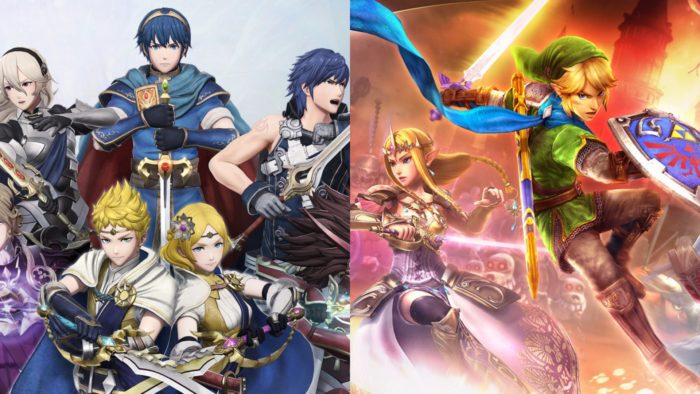 Hyrule Warriors featured traditional warriors gamplay, having you capture bases and take down hordes of enemies. Zelda’s inspirations creeped in with a few different ways, first of all by featuring different equipment that you could use. In addition to main attacks each character had items like bombs, the boomerang, and the hookshot that they could use in battle. These were weak but could cause various effects, like bombs staggering enemies and blowing up obstacles. Although there wasn’t any in depth puzzle solving in Hyrule Warriors, it did feature a degree of puzzles making you use your items. You can also find chests scattered around the battlefield which reward you with new weapons or Heart Containers to give you more overall health. Another big feature brought from Zelda into Hyrule Warriors was boss battles, making you face off against giant creatures in certain battles, or other elite characters. Although they still used the same core gameplay, each boss either needed to be staggered first or had a small trick to defeating it. Of course iconic moves like Link’s spin dash appeared in the game, and you could even upgrade weapons and abilities at a Skyword Sword-like bazaar.

Now with Fire Emblem Warriors, the new title adapts quite a bit from its series. Gameplay is, of course, very similar having you mow down hordes of enemies while completing objectives. This time though there’s a bit more influencing combat, like the weapon triangle. The strategic element makes its way into Fire Emblem Warriors, meaning you sword wielders will be weak to lance wielders, lances weak to axes, and axes weak to swords. These weaknesses and strengths aren’t as pronounced as in the strategy games, but still affect combat. At the same time you can issue orders to your units on the battlefield telling them who to attack or where to go, and you have the ability to use vulnaries to heal or have a staff wielder heal units.

The game also allows you to link up with another character a la Awakening and Fates, boosting their stats while unlocking new moves to use. Characters level up in battle, increasing a number of stats that make them stronger., and you can choose to see every stat boost or have it just pop up saying you leveled up. For even more Fire Emblem features you can choose to play the game in classic mode, meaning that if characters die in chapters they won’t be available for the rest of the time, even though they stick around in the story.

Of course both games also feature elements of the Warriors series, particularly the over the top special attacks. In Hyrule Warriors this is dictated by magic power to enter a Focus Spirit Mode, while Fire Emblem uses something called the Awakening Gauge to enter Awakening Mode. Both games are unique combinations of the two series, but in terms of sheer features adapted from their original series, Fire Emblem definitely has more.

Both Hyrule Warriors and Fire Emblem Warriors feature original stories that have characters from different universes crossing over and meeting. It can be fun for fans seeing their favorite characters interact, but there’s also a host of new characters introduced to the mix as well. The big difference between the two games is how their original characters function in the story.

While Hyrule Warriors did introduce a new hero with Lana and later Linkle with the 3DS version, most of the new characters function as villains. The major villain of the game Cia is entirely new, and her two allies Wizzro and Volga are also created by Koei Tecmo. While there are, of course, villains from the Zelda series included, these new ones are who hatch the main plot. Now on the other hand with Fire Emblem Warriors, the new characters take the role of the main characters.

There are new villains created for Fire Emblem Warriors, but similarly to Dragon Quest Heroes you’re playing as these new characters and encountering the famous characters of the series as you go. Whereas the main characters of Hyrule Warriors were still largely Link and Zelda.

Certain story elements between the two games still exist as well. In Hyrule Warriors these are things like visiting the Great Fairy Fountain to get upgrades and new powers, while Fire Emblem Warriors lets your characters bond and have support conversations.

Both of Koei Tecmo’s games feature a fun throwback mode, featuring a retro styled map that you have to work across. Of course, the respective games style their modes towards the classic gameplay of each series, with Hyrule Warriors getting Adventure Mode and Fire Emblem Warriors getting History Mode.

Adventure Mode places players on a rectangular grid made up of different boxes. Each box contains a battle or item, sometimes battles are large sometimes small. Usually, the battles require you to meet certain objectives in order to complete them, like defeat a certain amount of enemy captains in the specified times. Some boxes on the grid reward you with items, like the candle or compass, that are required to unlock other boxes. In this way, each map functions as a sort of puzzle, making you battle through it, get items, and figure out how to unlock everything. Of course, the entire mode is styled in an 8-bit top down view, just like the original Zelda, and there are multiple Adventure Mode maps based on different games in the series.

Flipping over to Fire Emblem Warriors you have History Mode, which is based on battles from across the history of the series. Each map “recreates” a battle from a different Fire Emblem game with bits of dialogue even, placing your unit and a handful of enemy units on the battlefield. You need to move your unit up to enemies to take on battles, which are ranked with different levels. By beating battles you can unlock helpful items, gain different ranks, upgrade support conversations, and more.

The biggest feature of both History and Adventure mode, however, is that it allows you to unlock more characters outside of what you get in the story mode. It may take a while to get to them, of course, but if you want to unlock all characters in either game you need to play the modes.

When you compare that to Hyrule Warriors, Koei Tecmo’s previous game just seemed to have more variety. Hyrule Warriors featured characters from Ocarina of Time, Twilight Princess, Skyward Sword, and a new version of Impa. The DLC introduced a large variety of characters that expanded to more games from the franchise with new characters from Majora’s Mask, Wind Waker, Link’s Awakening, and Link Between Worlds. This put some serious variety into the game once all the DLC was released, giving you a wide breadth of Zelda characters to choose from.