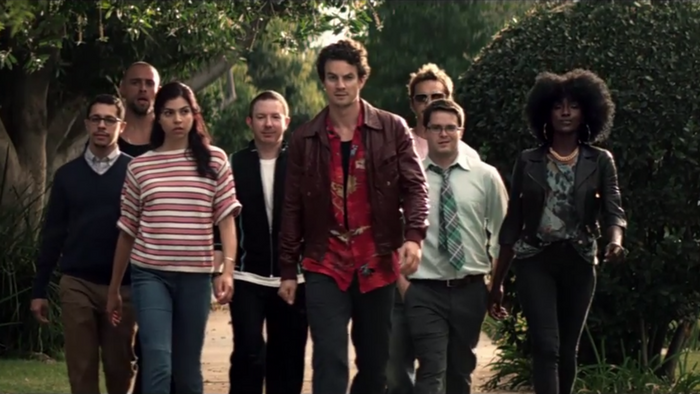 Call of Duty: WWII is due out in a couple of weeks, dropping on November 3. If you watch a lot of television (or YouTube videos) you’ve probably seen your fair share of advertisements for the upcoming shooter. They play fairly frequently, and if you’ve caught a popular show on networks like Cartoon Network during its Adult Swim programming block or Comedy Central, no doubt you’ve seen quite a few of them.

However, depending on which ad you caught a glimpse of, you might have seen something drastically different. There are two advertising campaigns going on right now that target polar opposites when it comes to the Call of Duty fanbase.

On one hand, you have a set of trailers and footage clearly meant to aim for those easily dazzled by explosions, grandeur, and the thrill of a brand new action game–those who appreciate the spectacle and blockbuster qualities that Call of Duty does so well. These typically show off some of the flashier moments of gameplay as well, along with glimpses at characters, the campaign, and even the new Nazi Zombies map.

These clips, hokey as they may seem, do a much better of showing the game off than the other ads that have been seeing airplay. They offer a glimpse at more than just the prospect of online play or the social aspects of the game, and show off exactly what potential buyers want to see more of: the game itself. They may be lengthier and full of what some may consider to be spoilers, but they’re by far the most practical and useful measure for the layperson watching television to figure out (at least partially) whether or not they want to buy this product.

These ads capitalize on the “cool” nature of the Call of Duty series and online multiplayer gaming in general. The phrase “squad” is thrown around a lot, implying that the ol’ Call of Duty gang has been in “retirement” of some sort and you’re getting everyone together again because this November, Call of Duty is back. And you can’t miss out on it. What are you, some kind of loser? Do you even game, bro? Strangely, there’s zero gameplay footage on offer, just a simple bumper that urges viewers to preorder the game.

There are shortened versions of the Call of Duty: WWII Live Action “Reassemble!” ad that play clipped versions of the entire trailer, with one in particular depicting an employee breathlessly running to his boss’s office for an “evaluation,” only to be met with a friend, who exclaims “Haven’t you heard? Call of Duty is going back to World War II, baby!” The exchange that follows is positively cringe-inducing.

“We gotta get the guys back together.”

Later, the lone female member of the “squad” is seen carrying a baby via harness (the “sharpshooter”) who’s just destroyed a kid in a game of darts. She initially refuses to join the “squad,” but relents when told there’s a babysitter involved.

These two completely different sets of ads demonstrate how out of touch the general public can be when it comes to showcasing people who enjoy video games (especially shooters like Call of Duty) and why they love them. Sure, it’s hard not to want to feel like you’re “a part of the team,” as it were, but there’s nothing helpful for those unfamiliar with the game, or at the very least this year’s version, to figure out why anyone wold even want to be in this squad.

Additionally, as is the case with so many other disappointing ad campaigns, they’re frustratingly lame, assigning “lesser” roles to the women starring as gamers and relying on old, tired stereotypes to appeal to a certain demographic. Sure, it works, but it also sends some pretty disparaging messages to viewers, like the idea that most Call of Duty players are middle-aged men who find it hilarious that their buddy might date an older woman or that bar fights are cool.

It’s understandable that the live-action ads that comprise the two-minute short are meant to engender a sense of camaraderie, the sense that we’re all meant to fit in somewhere with our own group of friends, and looking back at our old glory days, in a sense, back when Call of Duty was known for its World War II exploits. But it doesn’t change the fact that these two very different campaigns are, in a sense, dueling against the other. It’s disappointing, but then also sort of expected, especially considering Black Ops’ “There’s A Soldier in All of Us” slogan and its accompanying footage.

“It’s Call of Duty, baby,” one of the only other women in the live-action trailers grins to her male companion as she leaves a lover and a supposedly lavish lifestyle behind for a few multiplayer matches. “We’ve got work to do.”

No lie here, as far as advertising goes.