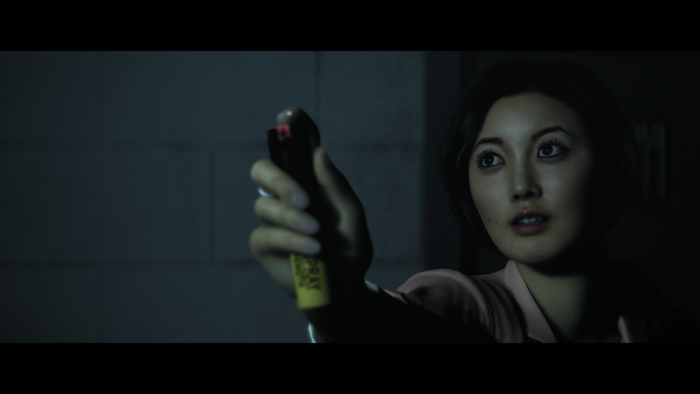 Going into Hidden Agenda, I was both excited and mildly dejected at the same time. The game’s reveal back at E3 earlier this year had me hyped because it was exciting to see what Until Dawn devs Supermassive Games had in store for us next. But when the game revealed its mobile Play Link feature, and we learned that its main gimmick was being able to play with friends through a mobile app, my excitement deflated. I was still open to having my mind changed, though, and Hidden Agenda succeeded in doing that.

So the logistics setup is fairly simple. Each player has to download the Hidden Agenda app on their mobile phone or tablet and connect it to the game on the PS4. You can play with up to four other people, and you’ll work together (or not) to make crucial decisions that will change the outcome of the game. During my demo, I played with three other people as we went through a scene with homicide detective Marnie and her partner trying to track down a murderer nicknamed the Trapper. How the Play Link gimmick works is that each time you’re presented with a choice, you’ll tap and hold your phone screen to direct a small cursor to the option you want. If you’re playing with an even number of people, and you have two people opting for each choice, one person’s gonna have to make a compromise.

Alternatively, if you want to make things a little more interesting, you can play a Takeover card to completely take control of the situation and make the decision that you want. That said, once you play a card, another player can quickly play a Takeover card of their own as well and wrestle control away from you. Each player can only use one card for each choice, and you have a very limited number of them so you’ll want to save them for the really big decisions.

You’re probably wondering, “Why don’t we all just work together, talk things out as a group, and make a collective decision?” Well, dear disembodied voice, I’m glad you asked. The answer to that question is in the name of the game. At the start of certain key chapters, a small deck of in-game cards will be shuffled and each player will receive one. Only one player will receive an Agenda card, which requires them to fulfill a certain objective or get a specific outcome in the chapter to earn more points. Part of the fun is not knowing who has the Agenda card or what the Agenda even is, and it’s up to the other players to try to make sure the Hidden Agenda isn’t fulfilled.

For instance, in a later chapter, we played as a district attorney who got to speak with the Trapper suspect we arrested earlier on in the game. The suspect insisted that he wasn’t the Trapper, despite being caught in an abandoned house with a woman tied to the bed, and we had the option to either hear him out or dismiss his claims.

The idea here is to keep an eye on how the other players are behaving, what choices they’re making, and how they play their Takeover Cards. It’s really fitting that Hidden Agenda is meant to be this psychological horror story, and the players themselves get to engage in a bit of a mind game as well. At the end of the chapter, it’ll be revealed if the Agenda was fulfilled, and players will get to vote on who they thought was the sneaky one with the Agenda card.

The mobile app also packs a few neat little features like story updates and character bios, though this does require you to look away from the game if you ever want to sift through this information on the phone.

Hidden Agenda looks and runs great on the PS4. As expected from the people who brought us Until Dawn, the characters in the game look eerily photorealistic, and the uncanny valley is extremely prevalent here. For the most part, I genuinely enjoyed my time with the game. Though I’m still on the fence on whether the game would work better as a primarily single-player experience or as a social one, the Play Link feature has proven to be rather compelling because of the appeal that comes from trying to outsmart your friends in secret. All gimmicks aside, the story itself is interesting as a murder hunt, and that should be enough to convince many horror fans to give it a shot when it launches.