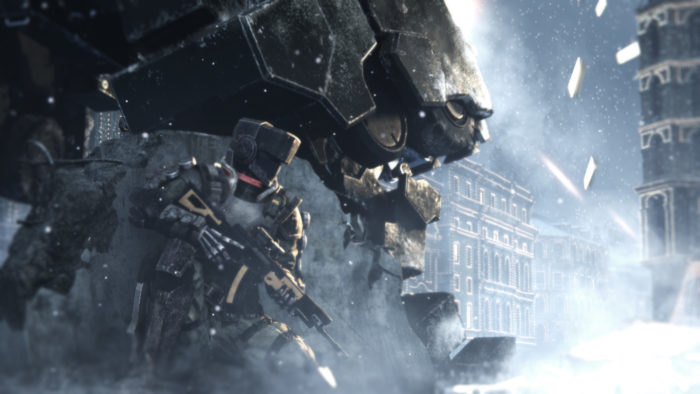 Perhaps one of the biggest announcements from Sony’s Tokyo Game Show conference this year was the introduction of a new Square Enix game set in the Front Mission universe called Left Alive.

Today, the title’s publisher released more artwork showcasing the title’s ruined world, of which fans got to see a snippet of in Left Alive’s debut trailer. The fictional city, named Novo Slava, appears to show some signage written in Cyrillic laying in the rubble, indicating that the game will take place in some alternate version of Russia. Seeing as how the landscape is bleak and brutal, Left Alive may thrust players deep into the environment, challenging them to survive.

Check out all of today’s new images in the gallery below:

Long-time Armored Core director Toshifumi Nabeshima is set to return for Left Alive. The mechs in the game will be designed by the famous Takayuki Yanase, who’s known for his work on Ghost in the Shell: Arise, Mobile Suit Gundam 00, and Xenoblade Chronicles X. If you didn’t notice already, artwork will be done by Metal Gear Solid artist Yoji Shinkawa.

Gameplay will reportedly allow players to fight against the walking-type Armored Core mechs known as Wanzers. Although they’ll mainly confront them as enemies, players can steal Wanzers during combat. Progression is left entirely left up to the user, so he or she might as well travel in style, right?

Left Alive is due out as a console exclusive for PlayStation 4 in 2018. It will also be available on PC via Steam.