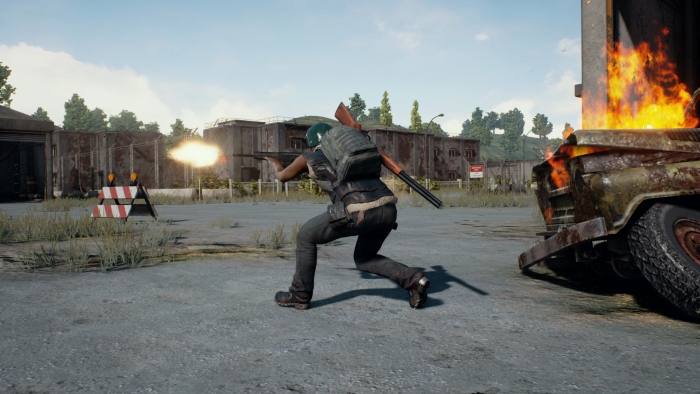 When asked for his most “insane” ideas for PlayerUnknown additions, Greene volunteered that he’d “love to add a single-player campaign.” But players shouldn’t get too excited about that prospect. It won’t be happening any time soon. “I think the island we have could be a great location for an interesting story,” Greene continued, “but [unfortunately] we just don’t have the time or the resources for this at the moment!”

Another feature Greene wants to have in his game but won’t realistically be able to any time soon is destructible environments. Certain fences, barriers, and small structures are already destructible in Battlegrounds, but players clearly have bigger destruction in mind. So does Greene.

“I would like to add more destruction, but it is very expensive on server performance so we have to be careful how much we add!” Greene explained. So while Battlegrounds won’t get destructible environments “in the immediate future,” it’s something Greene hopes to maybe add “someday.”

Continuing the trend of aspirational goals for Battlegrounds that won’t be happening in the immediate future but are increasingly likely to be added to the game at some point, Greene touched on nighttime settings. This is something the team at Bluehole has actually worked on, but it’s far from being ready for showtime.

“I have seen a prototype nighttime setting internally, and I think you’ll all be surprised at how good it looks,” wrote Greene. “No ETA on when this may get added to the game yet, [though], as it will take a lot of work to finish.”

Several fans also asked Greene about the possibility of ranked play, and it’s yet another feature Greene wants in his game at some far-off point. “We also want to add a character leveling system [and] weapon skill systems (that doesn’t [affect] gameplay) and other progression systems,” he said when asked if a ranked system like that found in League of Legends or Counter-Strike: Global Offensive could come to Battlegrounds. “We’ll have more info on these once we get a chance to fully plan them out!”

Many fans were also fixated on potential changes to the game’s various zones, pitching Greene on how they might be changed to ostensibly improve the play experience. Greene showed some intrigue about ideas relating to the Red Zone and White Zone but ultimately said they’d be staying the way they are for the time being. Change could be coming to the Blue Zone, however.

Greene noted that Bluehole recently held an internal meeting discussing ways to make the Blue Zone mechanics “fairer.” Bluehole wants to test these changes “soon,” but there’s “no ETA” as to when soon is.

PlayerUnknown Battlegrounds entered Early Access on Steam in March and will see a full release on PC and Xbox One later this year. A PlayStation 4 version will follow at a future date.