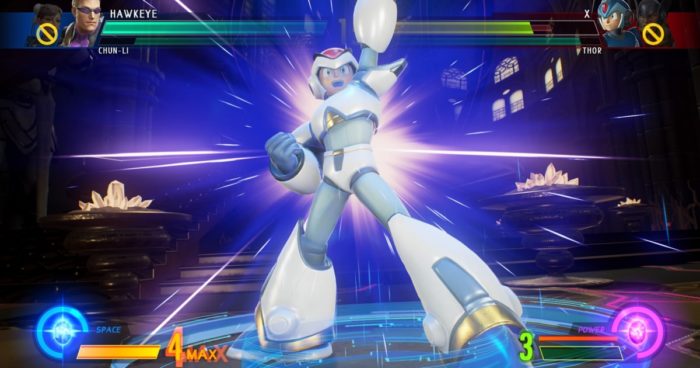 Marvel vs Capcom: Infinite on PS4

E3 demos of Marvel vs Capcom: Infinite offered up gameplay that felt shallow and made it difficult to move beyond the now 2-on-2 battles that no longer allow for assists from characters on the bench without actually swapping out completely. It didn’t feel wrong. It just didn’t really feel like a particularly progressive step forward either. But, after spending some time with the full release, it’s clear that Marvel vs Capcom: Infinite, at least in one area, manages to deliver a vastly improved fighting game experience while other aspects of the game are backsteps that are difficult to ignore. The very foundation of Marvel vs Capcom: Infinite is a solid fighting game that introduces new, worthwhile mechanics, and is best enjoyed via matches with friends or other players online. It’s just an unfortunate situation when solid gameplay is drowning in a sea of missteps.

While Marvel vs Capcom: Infinite comes with tons of goodies to offer in its gameplay, it’s also filled to the brim with distractions that come in the form of inconsistent art direction, an average character roster, and a story that’s deserving of all the dark, cold shade that has already been thrown its way since the early previews. Without the addition of new mechanics like Infinity Stones, it’s hard to say if Marvel vs Capcom: Infinite would have had anything about it that truly stood out in a positive way.

Players select one of the six stones before each battle and utilize the special abilities, or Infinity Surge, associated with the stone of their choice. Be mindful of the fact that you should be picking your Infinity Stone based on the pair of fighters you have selected for this particular match. Picking a sole favorite stone could easily lead to your demise when you face other skilled players. For example, the Time Stone will grant the opportunity to utilize an invincible dash. When other stones give you the ability to trap opponents in boxes, steal health, or even temporarily bring back a fallen ally, the Time Stone can easily get overlooked. But if you like playing a character like Thor, who is large, slow, and has a surprising lack of useful ranged attacks, the invincible dash from the Time Stone could be one of the most powerful tools at your disposal.

But while the Infinity Stones can unleash the mystical powers of the universe, even these handy gems just can’t do enough to distract you from Marvel vs Capcom: Infinite’s most obvious blunder — the presentation. The vast majority of these characters are so visually unappealing that their very presence in some of the cutscenes becomes a distraction to the lackluster story that’s trying its best to pick up steam. Chun Li received an entire rework and yet she still doesn’t seem quite like the beautiful and skilled fighter that graces Street Fighter. Meanwhile, laying eyes on Captain America will have you wondering if his disproportionally gargantuan chest somehow absorbed his neck. There just seems to be an overarching inconsistency in terms of art direction that has some characters looking like afterthoughts while others actually don’t look so bad.

It’s also odd that so many characters look subpar but the stages in the game are crafted with vibrant colors and packed with personality. Almost every stage seems to underscore the lackluster appearance of the heroes that have landed there. The only real disappointment in terms of stage design comes from the absence of interactables. It seems like more and more fighting games are making the stages an important part of each battle but Marvel vs Capcom: Infinite settled for stages that look great but serve no real purpose or provide an additional layer to the gameplay.

Marvel vs Capcom: Infinite could have also gone without its story mode completely. In addition to sitting through countless heroes deliver flat lines even when the moment is supposed to be as intense as it can possibly get, the story just feels rushed and uninspired. To be fair, it is better than what I expected after playing early demos of the story but it’s still so far off from being a “must play” game mode. The good news is that the robot enemies are also joined by other characters this time around but making it through the story is still quite a bore for two main reasons.

The first is that the game’s AI is less than impressive and quite inconsistent. Some enemies will walk directly into your attacks and pretend like blocking is a mythical legend akin to the Loch Ness monster. It makes plowing through your foes far too easy and incredibly anti-climactic at certain parts in the story. At certain points in the game, however, you will finally run into an opponent that has some basic knowledge of fighting game tactics but these instances seem random and poorly thought out overall. The second issue is the simple fact that the story mode doesn’t provide many meaningful or even entertaining interactions between characters. Most of these interactions feel forced and are delivered with flat voice acting that makes a majority of the cutscenes just feel awkward.

With such a poor Story Mode and a pretty standard Arcade Mode, Marvel vs Capcom: Infinite’s multiplayer modes swoop in like a saving grace. Since Infinite’s foundation still calls for strategic gameplay against more challenging opponents, playing against friends or competing online is actually the best way to enjoy the new mechanics and current character roster. Pairing the right Infinity Stone with the right characters and the right play style can seriously result in a truly formidable foe and allow you explore pairings that other game modes would have never challenged you enough to discover. There is also a Beginner’s League that proves to be a pretty nice touch. The dedicated online space for players who are rank 14 or lower provides newcomers a chance to compete with other new players while also getting acclimated to the game. It’s a great time to explore different stones and character matchups without being brutally punished by more advanced players.

True Marvel vs Capcom fans will still find quite a bit to enjoy here in terms of mechanics. The new strategic options made possible through the Infinity Stones are a fun, worthwhile addition overall, although it may take some time to really adjust to their presence. The button layout returns to the days of the first and second Marvel vs Capcom games, ditching the light, medium, heavy, and launcher layout in exchange for the light punch, light kick, heavy punch, and heavy kick layout that day one fans will likely appreciate the most. While there are new features included for the sole purpose of making the game easy for newcomers to grasp, there is still enough demand for strategy and technique that playing the game online will give you all the challenge you won’t be getting in the story mode.

Fighting game players who are into the genre for the sake of going toe-to-toe with other players will have far more to look forward to than those who are attracted to game’s overall presentation or alternative game modes. So in the midst of quite a few missteps and mediocrity, you can’t deny that at its very base Marvel vs Capcom: Infinite did at least offer some solid improvements to gameplay while still keeping the overall pace and feel of the franchise. Unfortunately, the game struggled to achieve much else outside of that.