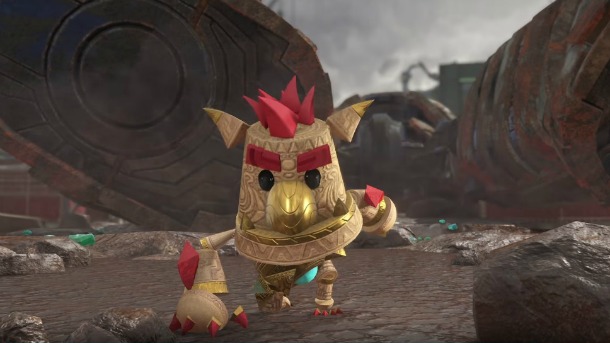 The original Knack wasn’t exactly a smash hit launch title for the PS4, but more of a middling platformer that had some serious flaws. Since it was being propped up as one of Sony’s big launch games, the game certainly disappointed quite a few fans, although it was far from the worst game around. It was especially surprising considering Knack had Mark Cerny behind it, the executive producer of the first three Crash Bandicoot and Spyro the Dragon games. With Knack 2, however, Cerny and his team clearly set out to fix those mistakes they made in the first game, and it leads to an experience that you should spring for and take a chance on.

On the surface, Knack 2 has a lot in common with its predecessor. It’s a character platformer with a fixed camera, and the story takes place a few years after the original. However, the story isn’t what’s worth jumping on board with, despite its impressive visual presentation. No, what you’re really coming for is the combat and platforming, which surprisingly does feel reminiscent of some of the classic character platformers.

Combat starts out slow, but builds up slowly throughout the game, unlocking more moves and options for you to utilize. This, combined with Knack’s ability to absorb relics and grow or shrink, makes for an experience that does end up feeling unique. The size mechanic plays into the entire game, forcing you to shrink down to solve certain puzzles or find a path forward. At the same time, my absolute favorite parts of the game featured Knack growing to gargantuan sizes.

It’s amazingly fun to take on enemies when huge that gave you trouble just 30 minutes ago, when you were small. The game really grabbed me for the first time as I stormed through a Goblin city, tearing down buildings, stalls, and enemies in my path. Somehow the segment oddly reminded me of the PS2 game Rampage, where you played as giant monsters duking it out in the city. There’s a gleeful sense of fun as you tear through entire cities and structures.

Besides the size mechanic, there’s just a lot of content to dig into with Knack 2. Besides the 10-11 hour story, you can play through the entire game in co-op, which meaningfully changes the combat system with cooperative moves. On top of that, you can play through on multiple difficulties, and unlock Time Attacks and Coliseum Attacks once you beat the game. If that’s not enough content, there’s quite a few unlockables that come in the way of Gadgets that give you bonus effects or Crystal skins for Knack, which grant him new and unique abilities.

Coming in at a $40 price point, Knack 2 looks pretty attractive for anyone that’s looking to get that platformer itch scratched. Good platformers are few and far between these days, the Crash Bandicoot N’Sane trilogy not withstanding. After some disappointing titles like Yooka-Laylee and Mighty No. 9, it’s refreshing to get one that feels wholly engaging as well as unique. Knack 2 isn’t the perfect game of course; it can be far too easy at times, suffers some pacing issues, and has a generally predictable story. However, the size mechanics and main character do give a distinct personality to the game that you can’t find in any other platformer.

It’s truly astounding how much of an improvement Knack 2 is over the original. It may not ultimately be able to stand up with the likes of Ratchet & Clank: Going Commando, Sly Cooper, Spyro: Year of the Dragon, and other games done in a similar vein, but it’s another solid title in the impressive library of the PlayStation 4. While you’re waiting for the torrent of Fall titles to hit, Knack 2 is a great game to take a chance on, and just have some pure, platforming fun.