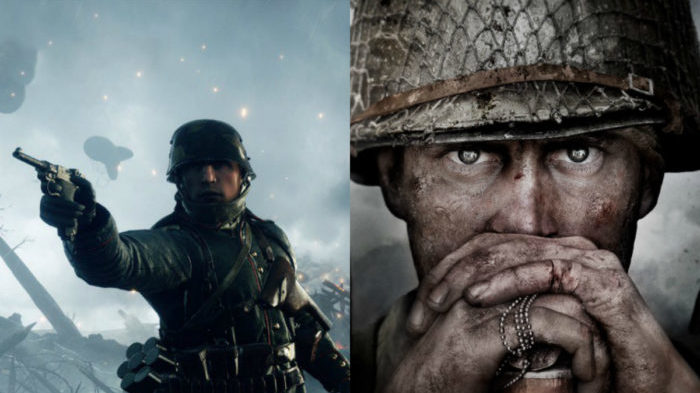 The second weekend of the Call of Duty: WW2 closed beta has drawn to a close, and I’ve already found myself going back to Battlefield 1 to sate that team-based first-person shooter craving. Thematically, Battlefield 1 and COD: WW2 aren’t so different. Sure they’re set about 30 years apart, but the new Call of Duty is a lot closer to EA’s shooter than Infinite Warfare.

When playing COD: WW2 it’s hard not to make comparisons to Battlefield 1. Not only do they have that gritty, realistic tone representative of the two World Wars, they even share a lot of the same geography and equipment. I’ve put together this article to help those who are playing BF1 decide if COD: WW2 is right for them, or for those who caught the closed beta and have the itch for something to play until November.

The primary difference between Battlefield and Call of Duty is the scope. Battlefield’s main multiplayer mode, Conquest, pits two teams comprised of up to 32 players (64 players total) each against each other to capture and hold key points of the map. By contrast, Call of Duty maxed out at 12 players at a time in the beta, and it looks like 18 players might be the most per match in the final game.

The environment I saw in the Call of Duty closed beta reminded me a lot of the locales in BF1, probably because the two World Wars occurred in roughly the same area. The map added to COD this weekend, Aachen, in particular, reminded me of Battlefield’s Amiens. The main difference between the arenas in both games is the size.

Battlefield 1’s maps are expansive, almost to the point where some of the space is underutilized. All this space gives each map a natural feel, and since the player can climb, jump, or run almost anywhere in-bounds, you tend to see a lot more unique troop movements as players jockey for control points.

Call of Duty: World War 2, on the other hand, feels much more claustrophobic. That’s not necessarily a bad thing, as the tighter space plays into the more aggressive nature of COD’s gameplay. However, the maps feel more like you’re running through corridors disguised to look more expansive, and you end up with camping issues since there are always certain points of each map that are difficult to assault without getting killed.

What We Fight With

The guns are the stars of both these games, and you’ll find a lot of similarities between their respective arsenals. In fact, they have several guns in common, albeit with slightly different handling characteristics. I do have to say though; I prefer the general feeling of firearms in Call of Duty more.

In Battlefield, often it feels like you’re firing airsoft pellets at your enemies. It takes a lot of rounds to down someone in a standard match, and it seems like gunshots and explosions don’t have the “oomph” that they should. The upside to Battlefield’s arsenal is that each gun is fairly balanced in each class. Some firearms are just plain better than others, but DICE seems to want to make it to where a level 1 player should be able to take on a level 110 player. When it comes down to it, skill determines the victor of a BF1 duel more than anything.

Call of Duty’s firearms have a bit more meat to them. Whether it’s the lower health per player in the game, or just overall sound and visual design, COD: WW2’s guns feel a lot better to me. The biggest issue with this COD’s firearms is the same one that’s afflicted the series since Modern Warfare.

The more you play Call of Duty, the more you level your rank, division, and weapon. Each time you achieve a new milestone in one of these three areas you’ll unlock something. The higher level you are, the more (and more of the time better) weapons you’ll have access to. Rank up your division, and you’ll get boons like more ammo, and leveling the weapons up themselves allows you to unlock attachments to augment their capabilities.

This ends up making a gap between the equipment that a level 1 COD: WW2 player and a max level player has access to that skill alone often can’t bridge. The solution to this is supposed to be matchmaking players with those of similar ranks, but in practice, this sometimes doesn’t work so well. The full effects weren’t felt in the demo, but once the game is released, there will inevitably be some issues with lower rank players getting matched with upper rank players and getting wiped out by their superior firepower.

War, What is it Good For?

One of the big new attractions of Call of Duty: World War II is the War multiplayer mode. In this mode, one team is tasked with trying to complete a series of objectives while the opposing team blocks them. The comparable mode for Battlefield 1 is Operations mode, which has one team defending a series of sectors while the enemy attempts to capture them in multiple waves.

Battlefield 1’s Operations mode is a fun getaway from Conquest, though they’re very similar. There are two major issues with Operations that makes it sort of a dud though.

Getting into a full game of Operations is hard. Right now with In the Name of the Tsar newly released, there’s plenty of people playing the two new Operations that come with that expansion, but you’ll be hard pressed to find a full game featuring the maps that came with They Shall Not Pass.

It’s also just a bit too close to being a variation of Frontlines that just goes one way. It’s fun, but it doesn’t add a ton to the Battlefield formula.

Call of Duty’s War mode features maps made specifically for that mode. Operation: Breakout was the only map available in the beta, but it left an impression as something that’s very good for the series.

In Operation: Breakout, as the Allied Forces you must rush and capture a German HQ, rebuild a demolished bridge, blow up an ammo dump, then escort a tank to take out some AA guns. Each objective requires you to switch up your play a bit, and it ends up being methodical and action-packed.

The main issue I had with the map I played was that it was too short. Each game can only last a maximum of 16 minutes, with each objective having a four-minute time limit. I would like to see the max player count for this mode go up, and see more objectives per map. For those who wanted shorter games, maybe there could be rotations of short, medium, and long War mode matches, or even a pool of randomized objectives.

If I liked Call of Duty: WW2’s beta, would I enjoy Battlefield 1?

If you enjoyed the COD: WW2 beta, then a lot is waiting for you in Battlefield 1. Several of the modes, like Rush and Team Deathmatch, replicate the frantic play that’s a hallmark of Call of Duty quite well. You’ll also get to enjoy a visit to many of the same environments you saw in the beta, and get a chance to weird some of the same firearms.

This is a bit iffier of a question. If you really like Conquest mode and vehicle combat, you might not enjoy the close-in combat of Call of Duty. There’s technically no vehicles found in the game in the same sense that you see them in Battlefield. Also, there’s a lot more emphasis on what each soldier does, and the teams are a lot smaller, so if you like that feeling of attacking en masse with 31 fellow players you may not love Call of Duty.