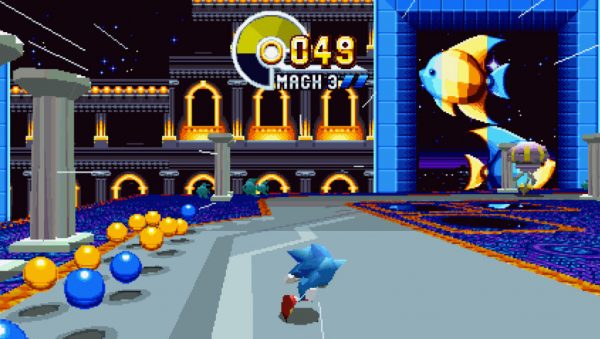 Last month at San Diego Comic-Con, a panel featuring the developers behind the upcoming title Sonic Mania revealed the game would feature special stages rendered in 3D, and Sega has just released some awesome new gameplay footage. Along with Special Stages, Bonus Stages, and Time Attack make a return.

Special Stages are accessed via giant rings that are hidden throughout each level. These rings transport players to another dimension with a third-person perspective reminiscent of Sonic CD. These Special Stages have players collecting blue orbs to up Sonic’s speed, and rings to extend his time. When players can enough speed they’ll catch the UFO seen on the map’s horizon; if they fail, the stage will end but can be retried infinitely.

Bonus stages have players navigate Sonic, Tails, or Knuckles through a series of blue spheres to clear the stage. Touching the spheres ends the bonus stage instantly. Silver Medallions are awarded to players who complete the Bonus Stage. A Gold Medallion is awarded to those who manage to collect all the blue spheres and rings.

While Time Attack mode is a speed runners nirvana, providing an online leader board for players to compete for high scores.

Check out the trailer for the new gameplay below:

Sonic Mania is coming to PlayStation 4, Xbox One, Switch, and PC on August 15.