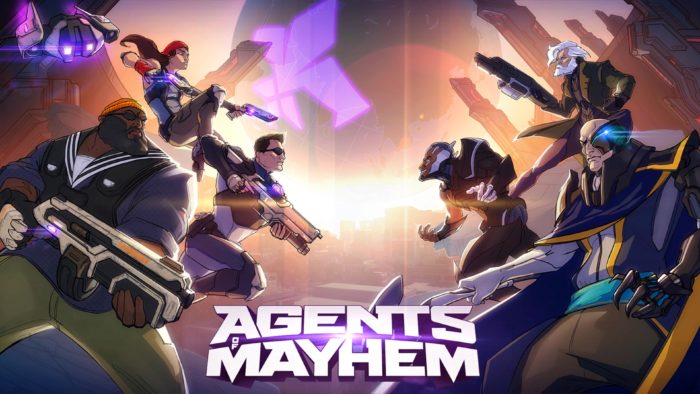 Agents of Mayhem on PS4

After Saints Row IV, I wasn’t entirely sure what to feel about how the series had transformed over the years. What at first seemed like a shameless grab at GTA’s popularity quickly became one of my favorite modern video game series thanks to its character-filled open world, copious buckets of humor, and wacky take on typical action. Yet when the fourth game came along it started to feel as if Volition, the studio that managed to make something that was much more than a mere GTA clone, was running out of ideas. Things were getting a bit too wacky, and a need for a reset was becoming in order. Thankfully Gat of all people, notorious gangster of the Saints Row universe, would quite literally go through hell and make it so a new universe can emerge, one where everyone gets a fresh start of sorts. That new universe brings us to Agents of Mayhem, an experience that is able to take that out-of-place wackiness that was growing out of Saints Row and give it a place where it can feel right at home.

Agents of Mayhem places players into the shoes of several agents operating as part of MAYHEM, the Multinational AgencY Hunting Evil Masterminds (they really wanted to get that “Y” in there). The agency is run by none other than Persephone Brimstone, an evil mastermind turned heroine who fans may remember from Saints Row: Gat Out of Hell. After working for LEGION (the League of Evil Gentlemen Intent on Obliteration Nations) for some time, she discovered a plan that was too evil for even her, so she founded a means to combat them and protect the world. How exactly did she obtain a group of individuals that were willing to sacrifice life and limb to take on a multinational, murderous corporation? Quite easily it seems. Persephone traveled the world, finding people with specific sets of skills who have suffered an injustice in the world, and made a deal to help them in return for their service.

Those characters, the actual Agents of Mayhem, are easily the best part of Volition’s latest game. There are 12 in total (not counting DLC) although you only start with three. Each one has their own unique loadout of weapon(s) and abilities that you can leverage against the varied forces of LEGION, as well as their own flavor of humor and badassery that really helps them come alive. The twist is that you’re never using just one agent for a majority of the game. When embarking on story operations (missions) you will have to choose a team of three operatives to take out onto the field. Certain operations will require a specific character type such as Shieldbuster, Master Programmer, or Skinpiercer so you need to incorporate an agent with those skills to balance out your team. There are also other factors to consider such as traversal type (there’s climbing and air dashing), whether or not you like stealth, weapons, and powers.

Choosing your team provides depth and fun in itself. As you unlock more agents, the increase in options opens up a world of possibilities. At first, when I only had four agents, picking the three I wanted was easy. I just left Hollywood behind because he didn’t have anything I really needed. However, after unlocking more heroes who changed the way I looked at battle and obstacles, it added more utility to others I may have previously ignored. Scheherazade, an agent you unlock later in the game, is quite powerful but relies on proximity and precision, so teaming Hollywood up with her gave me a ranged, explosive alternative for tricky situations. Or maybe I wanted to use Red Card who is all about risk/reward, so I’d bring along Rama who has a healing ability to balance out his self destructive proclivities.

What I greatly appreciated was not only the variety offered by the multiple agents, but the fact that the developers still allowed me some level of control over how each individual played. Sure, their Mayhem Abilities (think ultimate attacks) are locked in, but thanks to various Gadgets and Legion Tech that you can obtain throughout the game you can alter how specials work, change the perks and sometimes even the fire type of weapons, and even grant powerful passive abilities. You can then customize these skills and perks with modifications to further fine-tune a specific agent in Agents of Mayhem to your liking, creating your perfect dream team (mine consisted of stun-focused Fortune, an interrupting Scheherazade, and a debilitating Oni).

Of course, building your team was only half the fun, actually taking them out on missions and into the open world of a futuristic Seoul, South Korea was a blast. The developers didn’t take the title of Mayhem lightly, and players are able to wreak absolute havoc on the city. The streets are densely populated with civilians, vehicles, obstacles, and villains. There are constantly reoccurring activities as well such as cars to steal, patrols to dismantle, and LEGION lairs to infiltrate and overthrow. Combat was very engaging as I constantly found myself switching between agents in order to both keep them alive and make use of their specific skill sets in evolving situations. However, as fun as I did find the combat and general flow of action, Agents of Mayhem isn’t without its issues.

From a technical standpoint, Agents of Mayhem runs well until there are too many effects happening on screen at once (fire, explosions, electricity, glowing, etc.). The framerate begins to horribly stutter which can also affect gameplay. As I mentioned before, switching between your agents is a necessity, but during moments of slowdown the game has issues reading your button inputs. This can leave you stuck with a mismatch and lead to the death of an agent or two, simply because you can’t do anything. This isn’t as big a deal on lower difficulties as it is on higher ones where effects are more common and enemies have a higher probability of one-shotting you. Speaking of difficulty, this was also a weird hurdle for me to contend with during my time with the game.

Agents of Mayhem has 16 different levels of difficulty which provide increased challenge, XP gain, and cash rewards. I loved that idea of letting players enjoy Agents of Mayhem as easily or as difficult as they so chose. However, if you play well for long enough, the game automatically raises the difficulty without telling you. Throughout most of my time it only raised the bar one level every couple of hours or so and I was perfectly fine with that. But there was one point where the difficulty, which I had just set five minutes before to level nine, jumped all the way up to 15 without warning. I was very confused as basic enemies were killing me in seconds (I had yet to fully level up the team I was using at the time) until I checked the mission restart options and noticed the large jump. The jump in difficulty only happened a few times, but I can see it being jarring for players who weren’t expecting it and causing serious frustration (as it did for me for a solid 10 minutes).

There’s also a ton of repetition in the game’s side content. While the main missions and Agent Operations were all fun and engaging (many of the personal operations have you play as a single agent which really ups the challenge in a positive way), side activities like lairs and taking out LEGION weapons just feel like the same thing over and over. Even the interiors to those lairs, which are essentially quick dungeon crawls, are the same each time. You’ll quickly find yourself recognizing layouts, and the challenges thrown at you no longer come as a surprise, greatly diminishing the appeal of doing anything outside of the story itself.

Even with its issues, though, I had trouble putting Agents of Mayhem down. The story may sound silly with its interesting organization names but there are some deep parts to it and it gets better and better as the game goes on. I do wish there was multiplayer, though the game doesn’t really need it. There is some asynchronous multiplayer action that comes in the form of contracts, though. It feels good to work towards a common goal with players. In the end, what I was left with was a genuinely fun game that may have sprung from Saints Row but is very much its own thing.

I’ll be honest. I expected to come out of Agents of Mayhem wishing that Volition simply made Saints Row V instead. But now? Now I’m looking forward to what other trouble this budding agency can get itself into, and that’s saying something.