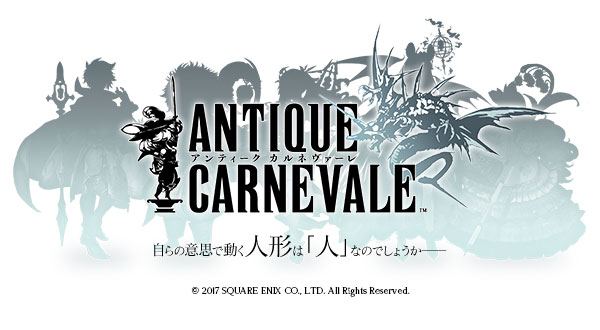 Square Enix has just announced a “completely new game” called Antique Carnevale for unannounced platform(s). They have also launched the official site for their project that contains a teaser trailer for the game’s first character and prologue. Gematsu has shared the translation for the Antique Carnevale clip which you can read below:

The explorers who wander around in search of an exit will find themselves deeply lost… And then, one boy visits that labyrinth by himself… He will listen. To the cries left behind by the “people” that have decayed in the labyrinth. He will understand. The desires of the “dolls” captured in the labyrinth. To that young man who stands in the space between people and dolls… I pray. May the blessings of the people of origin be with him.

The personification of the summons beast Wyvern. He regularly guards the town as the young commanding knight of the Valamion. He has a strong sense of justice, but hates rushing to conclusions, and is often censured by those around him. Under the orders of the president, he is currently searching for the strongest masters of the next generation.”

Square Enix plans to release trailers featuring the other Antique Carnevale characters on the following dates: July 7, July 10, July 12, and July 14. Similarly, they will also share more details about the game on July 18. You can watch the Antique Carnevale trailer below to learn more: