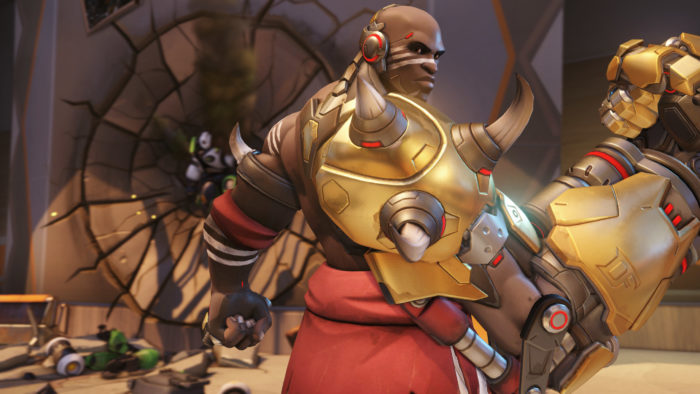 Currently in the midst of season 5, Overwatch is experiencing a dive meta wherein more mobile characters such as Winston, Lucio, D.Va, Tracer, etc. are taking top priority due to their ability to infiltrate enemy lines, get picks, and then jump back to regroup and push forward once the enemy team is weakened enough. Since the newest offense character Doomfist was released yesterday on the PTR, everyone is wondering whether Doomfist will further spurn the present dive meta, or counter it and adjust the current top character picks.

Doomfist himself has three mobility skills, but despite his ability to jump in and out of combat, he is less efficient than characters like D.Va and Winston, who are best at getting out of combat after successfully getting a pick without sacrificing cooldowns that could be used for damage. For example, D.Va is able to easily fly in and out of battle with her boosters while still absorbing damage without sacrificing her means of escape in the midst of combat. However, all of Doomfist’s mobile skills are all meant to deal damage as well, thus granting him extra shields to survive in close range fights while his cooldowns run out. Meaning if you don’t jump into a fight successfully and land hits as you do, you’ll have a tough time escaping with 250 health in a close ranged attack. Since one mobile attack will be used to enter the fight, and one used to escape, that leaves only one remainder to deal damage with before backing off. If you aren’t landing hits with all three, or even two of these moves successfully, you’re going to have a hard time surviving.

Therefore the cooldown on Doomfist’s most versatile skill, Rocket Punch, will be a big determinant on how he fits into the current meta. Landing a hit with Rocket Punch not only deals damage but dispatches and disorientates whoever is hit, meaning hardlock defensive strategies like Reinhardt and Torbjorn setups could be broken apart somewhat easily. As well, Winston can be knocked up and out of his Protective Barrier with Rising Uppercut, which before could only really be done to a lesser degree with a Soundwave boop by Lucio. Currently, Doomfist’s Rocket Punch has a four second cooldown, meaning he is pretty capable of diving into combat and leaving right away if he doesn’t land any hits upon engagement. Increasing this cooldown, which is of course something Blizzard might decide upon, would make Doomfist’s Rocket Punch use in a dive strategy a very high-risk, high-reward skill. If you land the first hit, you’ll likely have shields for survivabilty, but if you don’t, then it means doom for Doomfist.

Long-range DPS, such as Pharah, Solider: 76, and even Hanzo, are strong picks against Doomfist as long as they are not targeted by him. A hack from Sombra also leaves him incredibly vulnerable, even more so than Tracer in the same situation as he is a bigger target to hit. One major change we may see with the inclusion of Doomfist is an increased use of Zarya, who has been less useful in the current dive meta, replacing her for either D.Va or Winston in team comp. Her ability to bubble Doomfist when he jumps in for close-quarter engagement could mean huge charges for her and survivability for him. Zarya’s bubbles also protect her from all of Doomfist’s damage caused by skills even if she is knocked back by their after effects, meaning she could also be a strong pick against Doomfist if he is used by the enemy team in a dive strategy.

Overwatch game director Jeff Kaplan made a lengthy post in the forums on Battle.net discussing the concept of the dive meta in regards to whether we see it throughout all levels of Overwatch. He believes the game is currently balanced, and any meta shifts should occur from the ingenuity of the players, not through the altering of heroes. As well, the supposed dive meta is really spun by the top tier of Overwatch players, while the majority of users play Quick Play without thinking too much about ideal team comps or complex offensive and defensive strategies. Kaplan says, “The top six picked heroes (over the last month) in Quick Play are Genji, 76, Hanzo, McCree, Mercy, and Junkrat. For the statistical majority of Overwatch players who are not pros and don’t play competitive, this is your meta.” The top six heroes for competitive were also shared, being Mercy (by a long shot), Solider 76, D.Va, Lucio, Ana, and Genji, with Reinhardt taking up number seven. For the elite players, Ana consistently remains to be the number one choice for competitive matches despite her being a less mobile character.

This doesn’t mean that the dive meta isn’t still fruitful in the current Overwatch playing field. Pro players are winning games because they understand certain characters work best at this specific moment in the meta. However, this doesn’t mean every player will choose the ideal characters, or that the dive meta is indicative of the play styles across the entire Overwatch playerbase. Changing heroes or adding them in the case of Doomfist just to shift the meta and alter pick rates would mean sacrificing balance in lot of areas. For example, when D.Va was nerfed a few months ago there was an uproar saying she was no longer viable as a tank character. “We did not touch [D.Va]. And now she is one of the dominant heroes in the dive meta – clearly not in need of a buff,” says Kaplan. “The desire for dive comp to go away will not be satisfied from some of you until Winston and D.Va are nerfed into the ground. But we’re not going to do that.”

How this all relates to Doomfist is that he was not added to the game with the desire to alter the meta in mind. His specific skills at this time seem to point to either a continuation of the diva meta with perhaps slight character swap-outs like Zarya for D.Va as previously stated, but he also may inspire a return to the three tank meta if pro players find his kit works ideally alongside tanks who could absorb enemy fire while he deals close-range damage. A key indicator will be watching any adjustments to his cooldown times after he is released from the PTR, with shorter times indicative of his potential in a dive meta setup.

It’s worth remembering though that the vast majority of Overwatch players will not use Doomfist with the dive meta in mind. As video after video is released, we learn about all of the little nuances that make Doomfist an interesting character. Like Reaper, Mei, and Zarya, he has means of escaping Tracer’s ultimate. Like Genji or McCree, he has a kit that is most effective at dealing damage if used in a certain order. And like Lucio, Pharah, and Orisa, he has ways of of pushing enemy characters around the map at his will to place them at disadvantages of the enemy team. Looking at how Doomfist plays now, it’s likely his high mobility and passive shield generating will make him a promising pick for furthering the dive meta, but it’s up to the ingenuity and creativity of those elite Overwatch players to determine if his inclusion will aid in a shifting towards a new or past meta as he releases off the PTR in the coming weeks.