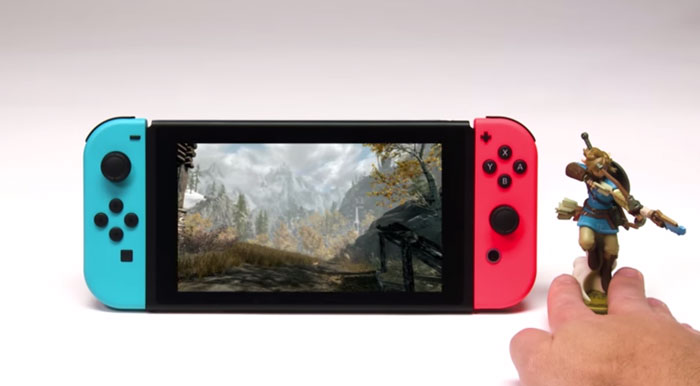 After being announced before the console was even out, at their E3 2017 event Bethesda finally revealed the first real trailer for Skyrim on the Nintendo Switch. Fans have known for months that Skyrim was landing on the Switch but now some specific features have been detailed. According to the trailer that was shown at E3 2017, Skyrim’s Switch port will have amiibo support … and motion controls. It’s true that Nintendo does motion controls better than pretty much anyone but motion controls haven’t been in vogue since Skyrim was a brand-new release. Shooting a bow and arrow with the two joy cons might fun to try once or twice but it likely won’t be the preferred way to play the newest port.

The highlight of the trailer and the thing that Bethesda seems to be promoting the most for Skyrim on Switch, is the idea of amiibo support. While the Breath of the Wild Link was the only amiibo confirmed for Skyrim Switch, things won’t likely end there. Since amiibo were introduced for other games outside Smash Bros. there have almost always been multiple amiibos that work with one game. Zelda is the most obvious series to pair with the announcement but the door is open to dress your Skyrim characters as heroes from Fire Emblem, Xenoblade and even platformers like Donkey Kong. The idea of a Dragonborn wearing Diddy Kong’s cap is too ridiculous to pass up.

Bethesda supporting amiibo and adding Nintendo related items to the game isn’t the most technically amazing feat. PC Skyrim players have been able to play as Link (as well as Darth Vader, the Green Arrow, etc.) for years thanks to mods. Yet there is still something about amiibo getting yet another function that feels exciting for Switch and Nintendo. Some mods are incredibly impressive but Bethesda should add a certain level of polish to the Nintendo items that modders can’t possibly replicate. The items received from amiibo might not even have the best stats, but it does add to the collection fever that amiibo tap into for the player.

The idea of playing as Link in Skyrim isn’t likely to get many old gamers to move to Switch. The trailer for the Switch version of Skyrim looks better than the game did when it was released six years ago. It doesn’t look nearly as good as the remastered versions that landed up on Xbox One and PlayStation 4 last year though. It has been confirmed on Bethesda’s website that the Switch version will have all the DLC from the original game just like the remastered PlayStation and Xbox ports. This means that content wise all the Skyrim ports for the current generation of consoles will be largely similar. The more powerful consoles are still probably the way to go for those who want to play Skyrim again because of the new coat of paint they provide.

However, if someone has never played Skyrim before or they are a diehard Nintendo fan, the amiibo on Switch might sway them. The idea of playing as Link in Elder Scrolls is not a revolutionary one but it is an enticing one. It becomes especially compelling with the promise of being able to play Skyrim on the go. Switching, pun intended, from playing as Link in Breath of the Wild to Link in Skyrim while in a train, plane, or automobile is what Nintendo’s new console is all about for gamers. Skyrim on the Switch might not be the most powerful version of the game but it will be the most unique, and Nintendo has always prided itself on being quirky.

What do you think? Do amiibo have you excited about the Switch version of Skyrim or would rather just play with mods? Sound off in the comments down below.