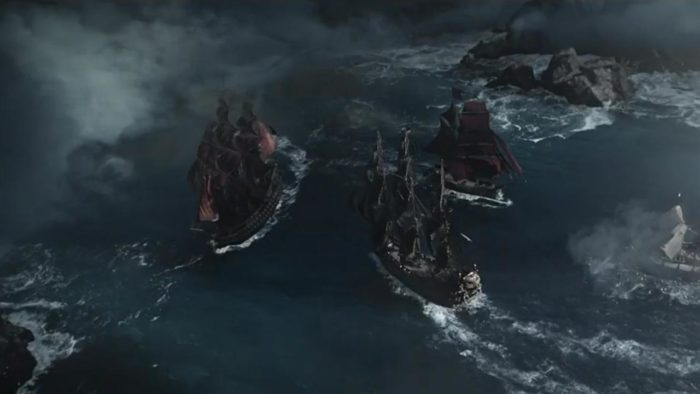 Skull & Bones was a brand new IP revealed at Ubisoft’s E3 2017 press conference today, and just like Rare’s Sea of Thieves, it places players in the boots of a pirate as they attempt to dominate the seas.

Right off the bat, it’s easy to draw comparisons between Ubisoft’s new pirate game and Sea of Thieves. Both games allow you to build your own ships to traverse the sea, there are PVP elements, and there are supernatural creatures to contend with as well. The big difference, however, lies in the games’ varying approaches to design and aesthetics. Rare’s pirate game goes for a more cartoonish look, while it’s clear that Skull & Bones has opted for a more realistic and gritty design. The world of Ubisoft’s game looks pretty grim and dark, lending it a rather ominous vibe.

Speaking with Rare about Sea of Thieves last year, they mentioned that their goal for the game was to make players laugh and have a good time. The developers often release short gameplay videos where their avatars are seen engaging in social activities together like enjoying a drink in a tavern, or just singing a shanty. Though we haven’t gotten to see much of Skull & Bones, it seems pretty clear that Ubisoft’s game won’t have anything as light-hearted as that.

Instead, Skull & Bones offers different gameplay modes for players to enjoy. The main draw is the PVP element, where players can compete against each other in a “variety of game modes.” There’s definitely a huge focus on naval combat, as the game boasts the ability to rely on tools like spyglasses to stalk your opponents, and make use of the wind direction to catch them unawares. If you’re not too into PVP, there are also PVE elements where you can team up with other players to hunt prey, which we can only assume refers to the kraken-like monster we saw at the end of the gameplay trailer today. Another interesting feature listed on the game’s website is the game world’s ability to react to your actions. Skull & Bones has a large open world where you can plunder lucrative trade routes, but the game hints at possible consequences if you do that too often. 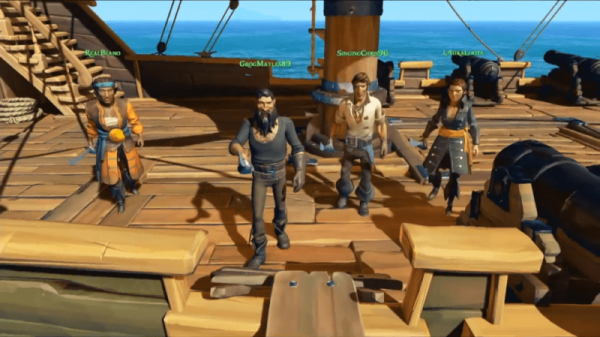 Similarly, Sea of Thieves’ main focus is on PVP and social interaction. Players can sail out to sea and run into other real-life players without knowing whether they’re friend or foe. Sea of Thieves is also set in a completely mythical and fantastical universe, which means that you can run into creatures like mermaids and krakens as well. Simply put, Skull & Bones pretty much just looks like a much more PVP-focused version of Sea of Thieves, except with less emphasis on capturing the carefree nature of the pirate life, and seemingly with the absence of island exploration and the ability to actually get off your ship.

Granted, we don’t have that much info on Skull & Bones just yet, and the game is still rather early in development, so a lot of things are subject to change. The game could very well see the inclusion of new features that set it further apart from Sea of Thieves later on down the line. As it stands, it’s hard to ignore the striking similarities between the two pirate games. Skull & Bones might have opted for a more ‘mature’ aesthetic and visual design, but it certainly doesn’t hide the fact that the premise and core gameplay for both games are extremely similar at the moment.