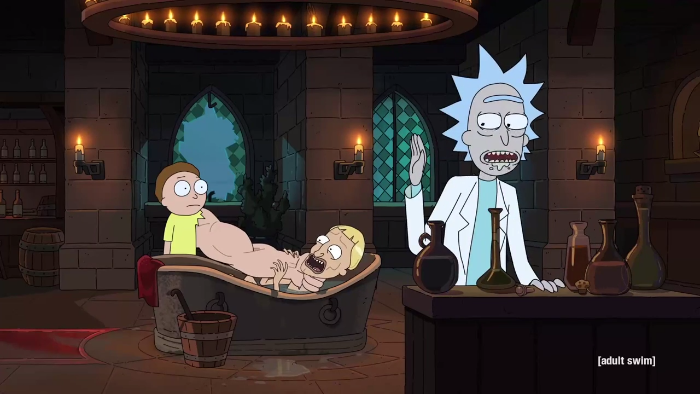 The wait is finally over. Rick and Morty are returning to Adult Swim next month on July 30 at 11:30 PM ET. No, this is not a test. It’s real life, and you’re certainly not dreaming.

A brand new trailer debuted today featuring a minute and a half of new footage, featuring everything from Rick having been transformed into a pickle to Summer growing to giant size after a foul-up by Rick and Morty. There also seems to be a bizarre bathtub attempted murder scene of a character who looks suspiciously like Joffrey from Game of Thrones, and a whole lot more.If you look closer, there’s even a heaping helping of Mad Max: Fury Road references to keep things appropriately edgy. You’ll just have to watch it for yourself.

If you like what you see (and you definitely will) then rest assured that there are ten episodes coming for this season, according to series co-creator Justin Roiland. There’s also the potential for a fourth season, as Roiland and other co-creator Dan Harmon let slip during a special livestream on Adult Swim’s website. So there’s plenty of Rick and Morty coming your way, because there has to be. Because Rick won’t rest until he gets that Mulan Szechuan nugget sauce, naturally.

Can’t get enough Rick and Morty ahead of season 3’s release? Check out Rocket League, and a smattering of other titles whose games are being invaded by Rick and Morty and friends like Mr. Poopybutthole and Mr. Meeseeks. So if the wait is too excruciating for you, check out some indie games like Move or Die and Gang Beasts as well. You’ve also got the mobile game Pocket Mortys if you’re really desperate.

For now, enjoy the delicious helping of new footage below.