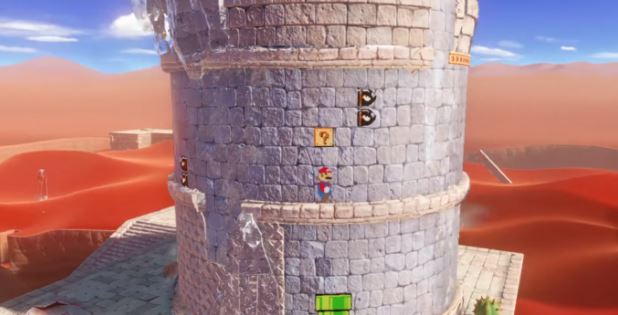 Super Mario Odyssey is Nintendo’s flagship Switch release for holiday 2017, and the game took center stage during the company’s E3 2017 Spotlight and Treehouse presentations. As was reported earlier today, the game is set for release on October 27, but Nintendo also shared a number of new gameplay and amiibo details later in the presentation.

First up, each area of Super Mario Odyssey will have its own currency that can be used to buy items, customize Mario’s gear, and decorate his ship. Speaking of gear, Mario will wear a variety of different hats during the game, and the level Nintendo showed off during the Treehouse event had him sporting a sombrero.

When Mario throws the sombrero at a classic bullet bill enemy, he can then capture and ride on it. He has to be careful with his timing, though they eventually blow up. One of the Nintendo reps described it as being kind of “like driving a car that doesn’t have any brake pedal.” But you can shake the Joy-Con to go a little bit farther.

Nintendo also showed off some retro 2D areas that look just like Super Mario Bros. levels from the NES. To access most of these sections, Mario will go through warp pipes, and players will hear the music change to remind them that their perspective has gone from 3D to 2D.

The 2D spaces are obviously more confined, and they make for more traditional platforming spaces. Nintendo included them because they wanted to infuse the game with some variety and the designers were hoping Nintendo fans would be amused by the throwback style.

It’s not the first time Nintendo has included vintage 2D areas in an open-world 3D Mario platformer, as it did something similar in the GameCube’s Super Mario Sunshine. But those areas were more confined from the rest of the game than Odyssey’s, which, while still being their own sections, also manage to feel like they’re actually part of the larger world.

In one such section, Mario jumped into the wall of a tower and climbed up and around it with 2D Super Mario Bros. visuals while the surrounding areas were still in full 3D.

Once he reached the top, a mini-boss encounter began with one of the evil-looking rabbits that have shown up in previous trailers. The rabbits are called Broodals, and they’re under the employ of Bowser. Apparently the Broodals are wedding planners trying to make sure a certain wedding goes off without a hitch. They’re wedding planners. Players will fight each of them a few times, and they’ll become tougher each time.

Nintendo also showed off a trio of Super Mario Odyssey amiibo: Bowser, Mario, and Princess Peach, all clad in wedding attire. The poses they’re in apparently relate to the game’s story, with Mario looking humble and Bowser appearing menacing.