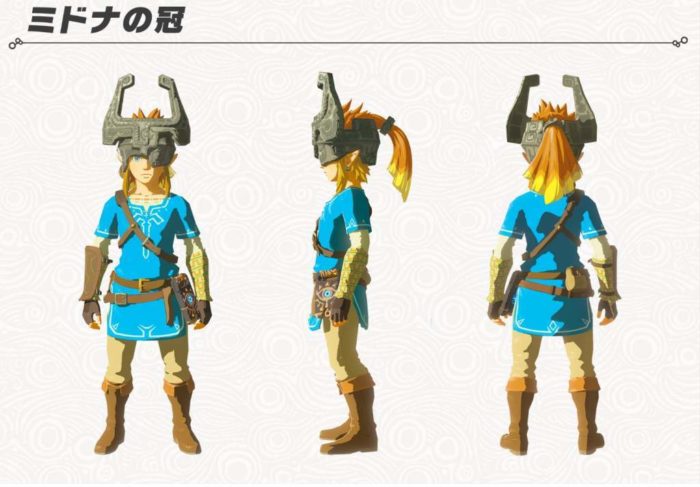 With The Legend of Zelda: Breath of the Wild DLC on the way, Nintendo has released a “countdown” to The Master Trials by giving players a short lesson on some of the items included in the DLC. Art Director Satoru Takizawa has shared a blog post on the official Zelda site that goes into detail on Midna’s Helmet along with the owner of the item.

The helmet originally belongs to a character named Midna who appears in The Legend of Zelda: The Twilight Princess for the Wii and Gamecube. There, she acted as Link’s partner who accompanied him throughout most of the game. Since the game’s initial release, Midna gained immense popularity in the fanbase and has she even become part of the Wolf Link amiibo that can be used in Breath of the Wild.

During the early stages of the game, the developers had Tetra from The Wind Waker riding atop Wolf Link in place of Midna. Her role as a “buddy” character was actually a first for a Legend of Zelda game and she had gone through a vigorous trial-and-error process. Takizawa had this to say about Midna’s development:

There was a secret project we were considering working on before The Legend of Zelda: Twilight Princess for Wii, and Midna inherited the character profile for the “goblin/devilkin” character that would have been featured in that project. Looking back at the development notes from that time, there are some descriptions left on the notes clearly reminiscent of Midna, including “the appearance looks like a monster or a child,” “can’t tell if she’s enemy or ally,” “can’t really tell what she’s thinking,” “sometimes selfish, but sometimes cute and naïve.” That’s why initial design sketches for Midna looked a lot like this “goblin” character.

While Midna’s helmet is a physical manifestation of power shadow magic in Twilight Princess, the equipment grants “Guardian Resist Up” to Link’s defense in The Legend of Zelda: Breath of the Wild.

The Master Trials is slated to release on June 30 as the first expansion pack to the game. You can learn more about the origins of the Breath of the Wild DLC items by visiting the official Zelda website.