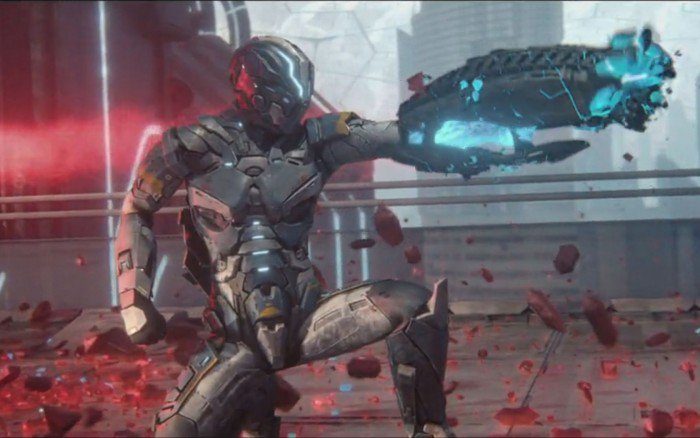 Housemarque is recognized as one of the finest purveyors of twin-stick shooters in the video game industry. Thanks to titles like Super Stardust, Dead Nation, and Resogun, their pedigree is recognized around the world, and is on the top of many favorite developer lists (especially for those who like arcadey action). After Resogun launched alongside the PS4 back in 2013, the twin-stick bug struck once again, and Housemarque has been turning out experiences, new and remastered, to satiate fans.

Back during Paris Games Week 2015, the studio announced yet another twin-stick shooter due out for the PS4, Matterfall. That game is finally due out for release on Aug. 15, and we got a chance to play the game at E3 2017. Long before I picked up the controller to attempt the demo, I had been following the game and was intrigued by the fact that we were trading a ship for a man in this side scrolling adventure. The limitations of motion were sure to add a new challenge to the action, and after spending countless hours in Resogun I wondered if it would live up to the hype. Once I actually did start to play, I realized it was indeed a new challenge and I relished the onslaught of laser blasts, robotic missiles, and world hazards as I quickly navigated tight corridors and built combos to boost my score.

It’s the movement of Matterfall that really sets it apart. Since you’re not in a ship, you can’t just smoothly move through environments flying, or taking to the ground as you please. Instead, you run on the floor, using a double jump and an air dash to navigate tricky passages, avoid obstacles, and lay waste to mechanical menaces that threaten your progress. Mastering the different maneuvers will see players streaking through stages, tracing a way through enemy fire, environmental dangers, and steel monstrosities. I admit, the controls took me some time to get a hang of, so when you see someone skate through any of the game’s levels it’s because they took the time to learn them, which is a very rewarding experience.

Of course, seeing as how this is a Housemarque game, there’s more to the action than just mastering movement. This is a twin-stick shooter, and Matterfall provides plenty of fodder for your powerful cannon to mow through. Enemies come in the usual forms you’d expect from the studio’s games. Some are stationary bots that punish anyone who touches them, others are quick missiles that try to get you out of your comfort zone, others that send out endless streams of fire creating intimidating, bullet hell scenarios at times. Fighting them is refreshing, especially since it means victory requires overcoming a challenge.

The best part is that you can take it slow if you really want to, but then you miss out on combos, huge multipliers, and other bonuses. Matterfall is definitely more fun when you push yourself to drive through all that lies ahead of you, just remember that the game will do everything it can to push back. I found myself dashing through enemies (which stuns them), then quickly lighting them up only to have more appear around me and just making matters even more hectic. The thing is, the more hectic it got, the more fun I found myself having. Housemarque has always had that ability, to steadily increase tension to just near the breaking point, yet making it so you don’t become overly frustrated to the point of quitting. Even when I found myself backed into a corner and near death I just couldn’t stop playing (until I literally had to due to my E3 schedule).

Housemarque managed to take the formula that it’s been refining over years and once again find a way to dial it up even more. If you’re a fan of their work in any way, then there are literally no reasons that Matterfall should not be on your radar as an instant-buy. You will die, often, but in the end you will become all the better for it as you watch the beautiful lights fill your screen and your enemies turn to scrap.