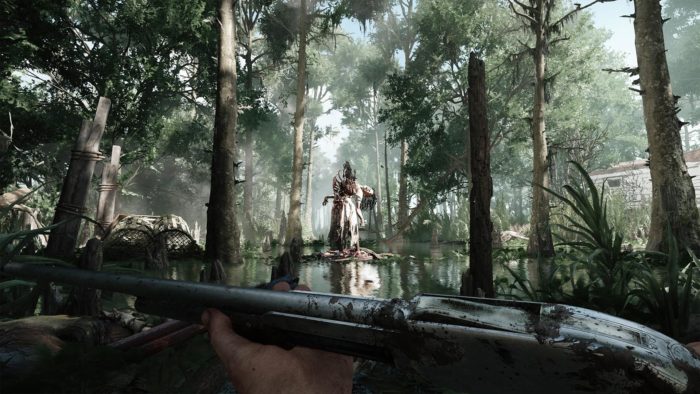 Hunt: Showdown is a game we technically were introduced to back in 2014 under the title Hunt: Horrors of the Gilded Age. Back then, Crytek just couldn’t seem to catch a break as financial struggles plagued Hunt’s development and left gamers feeling uncertain that the title would ever see the light of day. It’s a particularly wonderful feeling to be able to say that a lot has changed since then. Crytek showed off Hunt: Showdown’s progress at E3 2017 and what they have so far is a suspenseful, intricate experience.

Hunt: Showdown is a multiplayer survival game that will put your player awareness to the ultimate test. The game will drop players into matches where five teams of two will all be given the same objective on the same map—track down a monstrous target, defeat that target to obtain the bounty, and then make it back out of the map alive. That’s the simple version. After being dropped into the map players will have a few key decisions to make. You can go after one of the main targets in hopes to quickly grab the bounty and make your escape but you’ll have to consider the fact that all other players will be notified once you start banishing the target to collect the bounty. Once other players close in on your location they’ll be trying to kill you in order to take the goods and profit from your hard work. With that in mind you can also decide to kill enemy teams before searching for the target or you can follow from a distance in hopes to steal the bounty after they take down the target. Hunt: Showdown offers a lot of ways to play and a lot of ways to win.

Watching out for a main target and dealing with four other teams of two can be daunting enough but your environment is also filled with other AI controlled enemies. A variety of creatures lurking in these environments will be looking for blood. Zombies, large otherworldly creatures, wild dogs, alligators, leeches, and more will all be present on the expansive map and could rid you of valuable HP before you even approach the main target or run into another team. All the while, you can’t forget that HP is only one of the valuable resources that you’ll need to keep up with. Ammunition in Hunt: Showdown is incredibly valuable and getting your hands on more of it can present a major challenge. Ammunition resupply spots can be found at various places around the map but these spots are visible to all other teams as well. Approaching the open area to grab ammunition could easily result in a sneak attack if another team is lurking in the shadows and waiting to take advantage of an opponent with no firepower.

This intricate game gives players a whole lot to keep up with but it’s easy to forget about all the dangers waiting in the shadows when you’re busy gawking over how beautiful the game is. Any first impression of the game can’t overlook the stunning visuals that are still expected to see yet another upgrade. While there were a few minuscule frame drops seen in the gameplay trailer, Hunt: Showdown overall looked just as smooth as it was undeniably gorgeous. The only confirmed map at the moment is in the swamps of New Orleans and the atmosphere couldn’t be more appropriate for a game like this. There is something enchanting about seeing moonlight bouncing off the murky waters or small lanterns providing a soft illumination of the decrepit environment that surrounds it. It’s mind boggling to think about the fact that Hunt: Showdown isn’t even finished yet and it’s already looking better than some of the most popular titles on the market today.

So far, there is a lot to praise about the upcoming title but, perhaps, maybe too much. Despite the fact that the game looks incredible and was a joy to watch, you can’t help but wonder if the game is a bit too ambitious. As developers rattled off all the features and key components of the game, at a certain point it seemed like the list had no end in sight. The basics of the game that were previously mentioned in this article are only scratching the surface of all the dynamics of gameplay here. The game also features a mechanic called Dark Sight, which allows players to use a paranormal connection to find new clues about their target’s location. There are also portals the players can interact with that will actually allow them to see through the eyes of the closest target. In this case, looking through the creatures eyes made it apparent that the target was a large spider and it was hiding in the corner of a dimly lit building. The game also features different classes of hunters, a full gear system, an XP system for leveling up your hunter, and even permadeath. Yes, that’s right. Make the wrong move and you could lose everything you’ve been grinding so hard for. The hunter you spent all that time leveling up will be gone forever and so will whatever weapons you equipped them with for that particular match.

In all fairness, it’s a good move on Crytek’s part to ensure players are constantly thinking critically and strategically and not just getting dropped into a map in order to join the troll brigade. At this point, it simply feels like an unfortunate necessity that could possibly even result in some players approaching the game too cautiously. It’s yet another element players will have to consider as they attempt to dive into a game that’s already packed with features and promising that more will be on the way. The amount of content itself, however, isn’t the sole issue. It simply just means that devs will have to added pressure on their shoulders to ensure the game feels balanced and focused. Hunt: Showdown is a tall order but if Crytek pulls it off successfully it could easily be one of the most fascinating and dynamic games of its kind.

Hunt: Showdown is currently only confirmed for a PC release but devs are also considering a console release as well. No release window has been announced yet.