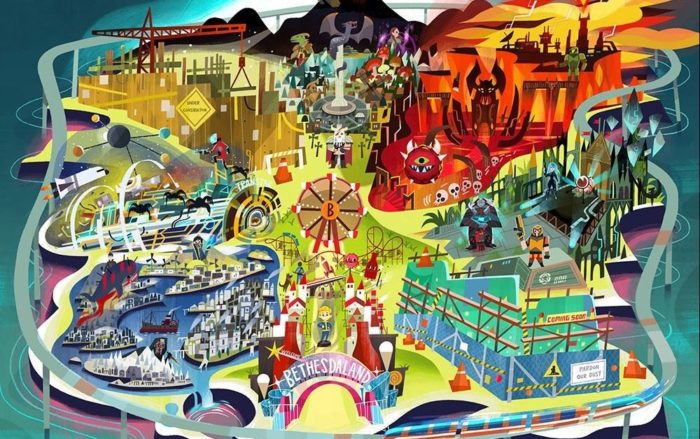 Last night, Bethesda became the third major company to host its E3 2017 conference. This year’s conference was the company’s third, despite initially announcing that its 2015 showcase would be a one-time thing. However, due to the overwhelming popularity of its debut, the publisher opted to bring the show back for a second and, ultimately, third year. However, despite Bethesda’s initial success with E3 conferences, this year’s was entirely unnecessary for everyone involved.

Fans had some big expectations going into the conference, with many looking back at how great the announcements had been from the years before. Plus, with Skyrim having been released nearly six years ago now, many had been hoping that Elder Scrolls VI would at least be getting an initial reveal trailer. Unfortunately, Bethesda had other plans in mind. Other plans that, for a good 15 minutes, focused on minor announcements for titles we’ve already seen.

Bethesda did have some solid announcements. Their foray into virtual reality with DOOM VFR and Fallout 4 VR had plenty of fans excited, especially with DOOM VFR’s new take on the demon-murdering gameplay of the 2016 title. Plus, just about every Fallout fan wants to feel even more immersed in the worlds that Bethesda craft. These were a great way to start off the conference, but it soon became clear that this momentum wasn’t going to last for much longer.

Sure, Elder Scrolls Online’s two new areas, Elder Scrolls: Legends’ new deck, and Dishonored 2’s upcoming standalone adventure will be sure to keep fans of these respective titles happy, but none of them really felt like they warranted a blockbuster E3 conference. These are the kinds of announcements you see being revealed through publisher blogs or Twitter accounts, not on-stage at E3 with millions of players watching. As such, it’s not the fact that these weren’t exciting developments for fans of the titles, but just that they aren’t what fans expected Bethesda to spend their E3 2017 conference discussing.

Eventually, things picked back up again with The Evil Within 2 and Wolfenstein II both being announced with trailers and release dates for later this year. While it’s understandable that Bethesda would want to showcase these games at the world’s biggest event, these are both games that the likes of Sony or Microsoft would have been eager to snap up and incorporate into their own conferences. With Microsoft’s big push for the Xbox One X, too, seeing these two games in native 4K resolution would have just packed even more punch into Microsoft’s conference, and reassured fans that the One X would be getting substantial third-party support.

The same can actually be said for Bethesda’s VR offerings. The PC Gaming Show is a relative newcomer to E3, too, and with DOOM VFR and Fallout VR both coming to HTC Vive, there’s no refuting they’d fit right into the lineup and give the show some much-needed major titles.

Unfortunately, rather than an Elder Scrolls VI announcement, Skyrim was once again shown for the Nintendo Switch. It has some really neat features such as the ability to use amiibo and motion controls, but this is likely something that will also be covered in Nintendo’s E3 2017 Direct and, again, wasn’t something that warranted Bethesda’s own conference.

The fact that pretty much all of Bethesda’s offerings either didn’t warrant a conference or could have fit into one of the others was only further compounded by the strange time that Bethesda decided to host it. Fans over on the east coast were waiting up until midnight to watch the show, but some in Europe stayed up until 5am for a somewhat meager showing in comparison to Bethesda’s past conferences. Nothing was fleshed out quite like it was in previous years. In 2016, Bethesda spent a good while going over Dishonored 2 after its trailer, sharing details and going more in-depth on Arkane’s upcoming action title. This year, everything felt rushed and shallow. Trailers went by, but Bethesda’s Vice President of PR and Marketing Pete Hines didn’t invite anyone out to go into further detail, or even recap what we’d just seen ourselves. The content itself was minor and the execution paled in comparison to previous years.

The saying that you can’t win them all certainly rings true when discussing Bethesda’s E3 2017 conference, but last night’s conference felt like it was put together more out of expectation of a Bethesda E3 show, rather than the contents justifying being put on the big stage.