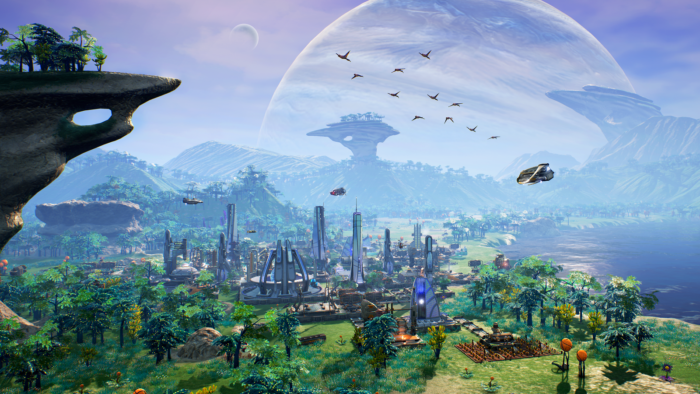 Aven Colony is the type of game that will satisfy your worrying city building, resource managing compulsion. Similar to titles like Tropico or Civilization, Aven Colony tasks you with building and maintaining a settlement in a brand new, alien world. Armed with nothing but tooltips and building tabs, it’s your job to attract more colonists to your settlement, and putting them to work to maximize efficiency like the tyrannical leader you are.

The game kicks off with a helpful tutorial that walks you through the basics of colony management. You’ve got drones that fly around the area, building whatever structures you have in mind for colony. Things aren’t as simple as just choosing a building from your tab and selecting a tile to place them on, though; you need to construct drone deployment stations first before you can get the manpower to construct them. The game also introduces an interesting wrinkle whereby you have to give some thought to the placement of these drone stations. If a station is too far away from your desired construction tile, you can’t build it unless you’re willing to expend resources on another station that’s closer to that tile.

After you’ve established a good setup of structures and buildings, you’ll need actual human beings to run them for you. This is where the resource management part comes in. Colonists will continue flocking to your immigration center as long as you have enough housing, food, water, and amenities to keep them happy. If your colonists start feeling unhappy or neglected for whatever reason, they’ll leave. Or worse, they could start a riot, or your crime level could go up. That’s where police drones come in, and they require their own separate deployment stations as well. Similar to the deployment stations, colony housing buildings also need to be near your employment buildings if you want to send workers there. There’s a lot to consider when constructing new things in this game. Positioning matters, and it’s a wonderful challenge for players like myself, who absolutely cannot live without a perfectly shaped colony, with organized farms and well placed mines.

One complaint I have with this system, though, is that the game doesn’t make it entirely clear the radius of effect your buildings have. It’s hard to tell when your drone stations are too far away from a tile, and that can cause headaches at times.

On a more macro level, there are two key resources that you have to keep track of as well. Nanite depletes with every new structure you build, and Power is a stacked resource that you’ll always need more of to keep everything running smoothly. The lack of either resource will quickly lead your colony down a path of disaster. However, I did feel that the methods of obtaining Nanite seemed way more limited than any of the other resources. In the early game, you can complete simple tasks to get them as a reward. Later on, you’re expected to mine for minerals and metals in order to convert them into Nanite. What you might not be aware of is the fact that these metals can be depleted, and it won’t be long before you have to start hunting for more sources. This isn’t as easy as it sounds, as you might not be in a good location where there are tons of natural resources to mine, or you might not have enough Power (and constructing more Power buildings requires Nanite – a vicious cycle) to obtain them straightaway.

Perhaps it was just the luck of the draw, but in my hours with the game, the Nanite strain always seemed too prevalent.

As the seasons change, your colony will be subject to wear and tear as well. During rainy seasons, you’ll need to build lightning towers to keep your buildings safe and untouched. During the winter season, your Power buildings will be less efficient, and your farms will drop in production, which means that you’ll have to keep a healthy stock of food (you need buildings for this too) or your people will starve. Outside of that, Aven Colony also offers the opportunity to trade resources with other colonies, allowing you to maintain a good variety of food sources and luxury items to keep your colonists happy. If you’re ever low on supplies, you can always fall back on a few trade agreements to get you out of a sticky situation.

The survival aspect of the game also comes into play when you start interacting with hostile alien life, namely the creepy space sand worms. They’re interesting curve balls, but ultimately, they’re also threats that are relatively easy to placate. As long as you have the resources, just place down the relevant building on a tile, and you’ll keep the monsters at bay.

All in all, Aven Colony is a great city building game that gets all of the expected core mechanics right. The game’s new ideas are interesting, but they can feel a little undercooked at times. It still feels incomplete, but with enough refinement and polish, it could potentially become another wonderful survival city builder title to add to your library.