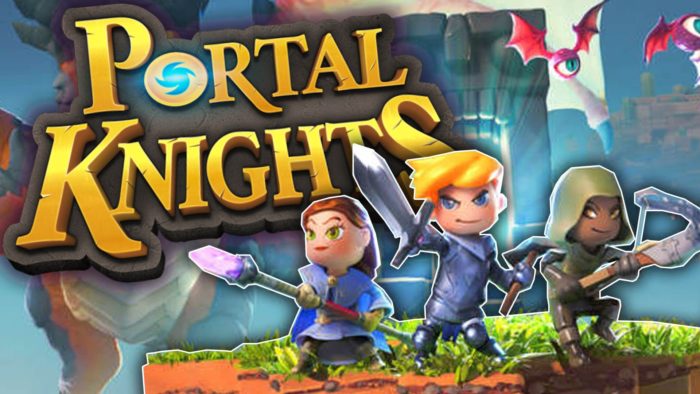 Minecraft came to yet another platform last week, the Nintendo Switch, and the game has now surpassed 120 million copies sold so it is no surprise that developers have begun using its style and core creation mechanic in new ways. That is exactly what Keen Games has done with Portal Knights. While it is predominantly an action-RPG, mining, building, and crafting are central to everything you do. That combination, and the addition of procedurally generated worlds, makes for an interesting game but there are more than a couple of issues.

The island I began on was a lovely looking place. The sun was shining, my house had already been built for me, grass, trees, and bushes covered the whole area, and there were small green blobs for me to attack to clear the area. I cut down some trees to craft myself a sword, farming the cotton already growing by my hut to make myself armor and I hunt down enemies to acquire blue blocks to open up a portal at one side of the island.

However, once I passed through the first portal, the procedurally generated worlds of Portal Knights weren’t so inviting anymore. The enemies became tougher and more varied, the islands became more complex, and I was stripped of the luxuries of my home island. This is where the gameplay loop of Portal Knights began to become clear. Each world is occupied by a particular set of enemies and certain materials, depending on its theme. Desert islands are inhabited by spinning all manner of things, including turtle creatures and cacti, while forest islands are overrun with tree creatures and berry bushes. As you make your way through each world, you need to find the materials that allow you to craft weapons, armor, and potions to help you survive against the enemies, move on to the next island and defeat the bosses you come across along the way. Defeating the enemies is the best way of getting XP to level up and find the materials to craft the all important portal stones.

Thankfully, combat is Portal Knights’ greatest strength. Enemies are powerful and you’ll often need to be a level or two higher than them to defeat them comfortably. Once you begin attacking an enemy, the camera will lock on to them and you swing your sword, or cast a spell, in their direction whenever you press attack. This also changes the jump button to roll that allows you to dodge the enemy attacks. This causes a few camera issues, especially when faced with a number of enemies, but you can unlock the camera with the press of a button.

Enemies are varied, with multiple attacks each and can be quite formidable especially when they gang up on you. Patience and tactics are required and you need to focus on the fight to see when the enemy is about to attack or you’ll be killed quickly. Also, significant grinding is often required and since Portal Knights is aimed at younger players, it is surprisingly challenging. As you use your weapon, it’ll begin to degrade and this is just one way the RPG and crafting structure of Portal Knights comes into play and, unfortunately, that RPG structure is where most of the game’s problems lie.

As you make your way through the worlds, defeating enemies and opening portals, you earn XP and when you level up you’re awarded with skill points to put towards any of the six skill areas: strength, dexterity, intelligence, constitution, agility, and wisdom. However, you’ll probably stick to one style of attack as you play. I used the sword at all times, never venturing into using magic skills or ranged weapons, making half of the skill areas pointless. Dexterity improved ranged attacks and I had no use for that skill so I tended to put all my skills points into improving my character’s strength or health. I chose the warrior type character at the start of the game and an early quest asked me to craft a sword. From then on, I had no need to change tact, no enemies required me to use magic or ranged attacks so I never felt the need to. At no point does it encourage you to change approach. There is a disappointing lack of options when it comes to improving your character down whichever path you choose.

The story and quests structure is also very minimal throughout the game. There are no overarching quests or story beats, aside from reaching the next island until you find and defeat a boss. The only quests available are gained by speaking to NPCs that are scarcely littered around each island and they rarely ask you to do more than craft an item for them, or find something they lost. Exploring the worlds and fighting the creatures that inhabit them may be fun but it is very repetitive when there are no other aims to push you along.

You are also likely to bypass most of the crafting options in Portal Knights. The home island, the first one you visit, prompts you to build a house, farm, and collect resources wherever you go, but that is never necessary. You may need to collect certain resources to craft weapons and armor but farming is never necessary since enemies often drop the items you need. Organizing your inventory is also more fiddly than it should be. There is a shortcut bar that you will use to access potions or weapons quickly but items constantly move themselves around so you have to go back to the menu to move things to where you wanted them to be. Your inventory will also frequently fill up with seemingly useless items that you have no use for at the time but could be useful at some point on your journey.

Since collecting enough resources to craft some of the more extravagant items can take so long and is so unrewarding, it serves you best to ignore that area of the game and focus on powering though to the next world. There is a lot of content for the price in Portal Knights, but it feels like things have been made to take longer than they should do.

However, the tedium of Portal Knights’ quest structure can be overcome somewhat by playing with friends. You can jump into your world with three companions to explore, build, and take on the harder enemies. Since it takes less time to do everything, you’re more likely to embrace the crafting side of the game and taking on multiple enemies as a team makes the combat even more enjoyable. I was kicked from online worlds a few times, even when playing alone, so it is best to stick to offline play if you aren’t playing as part of a team.

There is a lot for you to do in Portal Knights. Exploring the well-designed and colorful worlds while taking on groups of challenging and unique enemies is consistently fun but the shallow and repetitive quests and almost unnecessary crafting system make the game frequently tedious to play.