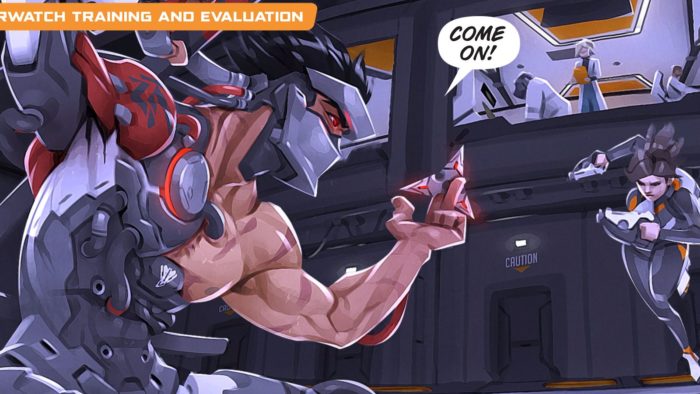 Today is a sad day for Overwatch fans, as the Uprising event comes to an end. The four-player cooperative horde mode that brought many players together saw Tracer, Torbjorn, Mercy, and Reinhardt fight the Null Sector Omnics in King’s Row. It’s been a great and fun time the whole way through, and a perfect example of how to mix a game’s lore with gameplay.

Blizzard’s clearly got long term plans for Overwatch, and they’re likely working on a new event right now as we speak. While the odds are that it’ll likely be planned for the 4th of July, one should also be dedicated to Blackwatch. In the series’ lore, they’re the covert black ops arm of the titular organization, headed up by Gabriel Reyes so that Jack Morrison would have deniability. With Reyes at the head of things, former criminals such as Jesse McCree and Genji Shimada were members, along with who else knows.

Blackwatch’s dealings — mismanagement, large scale failures, human rights abuses, and the like — were eventually revealed in the final days of Overwatch. Similar to Uprising, this event should take place in the heyday of the covert ops group. There’s clearly more members of the group beyond McCree, Reyes, and Shimada, and introducing a new hero (or heroes, if Blizzard’s feeling daring) would go a good way towards expanding the lore and offering new perspectives on what happened with these individuals.

Adding more than one new hero for this event would be greatly to Overwatch’s benefit, and not just to fill out a fourth slot. Blackwatch is said to have had a schism among its ranks, and the only way we’ll be able to have an idea as to how that played out is if we get some more operatives. Reyes is locked in no matter what, given that he ultimately becomes Reaper, and Genji and McCree have both departed for their own reasons, so we already have a rough idea of where those three characters will fall on things when it hits the fan. During the requisite breather moments in between acts in the hypothetical event, characters can converse about what they think about the mission they’re on or Overwatch as a whole.

Teamwork has always been at the heart of Overwatch, and this new Blackwatch event could lean into that even more. Since one of the crimes they’re accused of is human rights abuse, and if we assume that other members are or were criminals, they would naturally need to be kept on a leash so they don’t just leg it during a mission. To take a page from Suicide Squad or Ratchet Deadlocked, giving these characters explosives that are primed to kill them should one or more of them not comply would encourage cooperation. (Within appropriate reason, of course, such as one player lagging a considerable distance behind the rest of the group.) Fun as Uprising is, there are moments where players just don’t cooperate — how many times have you waited for someone to show up at the payload to trigger the second act of the mission? — and this would negate that to some degree. Story-wise, it’d also make sense, since Reyes would probably do something twisted like that along those lines if the operatives were that bad. Tracer, Mercy, Torbjorn, and Reinhardt bonded through mutual trust and friendship, and the four Blackwatch members can also bond through that, and the fact that they could die if one of them tries to screw the others over.

As counter-intuitive as it may seem to the very principles of Overwatch, a Blackwatch-focused event could also reward players and teams for outright messing up. These members are already going to be revealed just for screwing up some of their missions, so this event would be as good a chance as any to tell players that they did a “good job” for being the worst. Or if that seems too crazy, players could fail a mission by drawing too much attention to a point where it can’t be easily covered by Morrison, so you get scolded by both him and Reyes, which can’t be fun.

It’s also worth noting that Overwatch is a superhero game when you break it down, and superhero comics do dip into the grim and gritty on occasion. (Unless you work at Warner Bros, then that’s your bread and butter.) Blackwatch is the perfect time for Blizzard to get darker with the property, or at least as much as you can be when you’re a Teen-rated game. Uprising showed us what it’s like to be a full blown hero defying orders to save lives, and now it’s time for the flip side with anti-heroes not being so noble. This would be a good chance to have missions such as extorting politicians in a way that would do Sombra proud, or stealing weapons from foreign countries. This is a black ops team, and part of that means that you have to get your hands dirty so the good guys can do the clean work, after all. And while we’ve already seen at least what Reyes, Genji, and McCree look like with Blackwatch-themed skins, this could be an opportunity to give us some not-so-savory highlights for the three heroes, plus whoever else is along for the ride.

Blizzard has set up Overwatch’s lore to be both looming over the entire game and also waiting in the wings to be unearthed. The fanbase is clearly hungry for whatever information they can glean from the world and characters, and combined with the Christmas comic and Uprising being a resounding success, a Blackwatch event would make for a triumvirate of greatness for the superhero shooter.