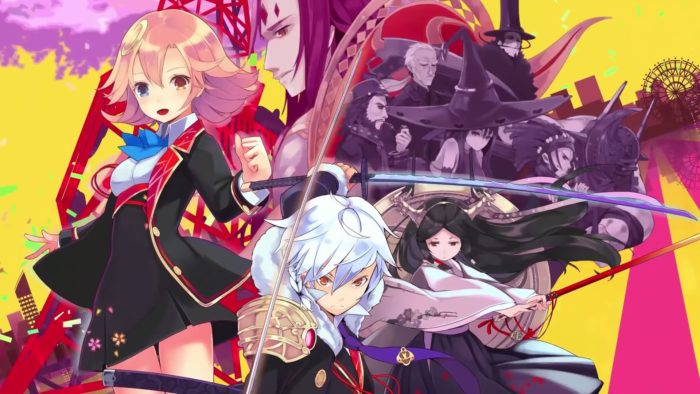 RPGs are, by nature, complex games that require planning and customization. There are times, however, that these can be taken to the extreme, like with Operation Babel: New Tokyo Legacy, a promising RPG that loses a bit of its luster buried under confusing menus and stats.

Operation Babel picks up after the previous game Operation Abyss, but functions in a way that allows new players to jump right in. You play as the Xth Squad, a special organization from the first game created to battle mysterious creatures and investigate bizarre incidents that have thrown the world into chaos. You create a brand new squad known as Babyl Squad in the wake of a strange event that’s taken place above Tokyo. A giant gelatinous structure called The Embryo has appeared, an imposing sight with what appears to be two giant beings trapped inside. The purpose and intent of the Embyro is unknown, and the world is thrown into chaos again as areas called Abysses appear with monsters known as Variants across the city of Tokyo.

Much like everything else in Operation Babel, the initial setup takes a bit of understanding. While I didn’t play Operation Abyss, the title tried to catch me up on events and concepts. However, the biggest issue is that Operation Babel really throws these ideas and key terms at you with rapid fire, expecting you to keep up with little details. An information terminal in-game gives you some much needed explanation on characters, terms, background story, and more, but your understanding of the game will really be heightened by playing Operation Abyss.

That isn’t to say Operation Babel’s story is uninteresting, however, as there’s some memorable moments for sure. Characters are generally quirky, and the script is written surprisingly well, with some surprising twists both early on and later. There are moments of the game that drag, however, as the story seems to crawl at certain segments that are filled with generic missions. It’s certainly going to take some work to understand, especially if you haven’t played the first game like myself, but there’s a decent story here to move the action along.

The core gameplay of Operation Babel sees you moving along the story and accepting missions, both related to the story and other, optional content. The story plays out through mostly dialogue matched with character portraits, while the bulk of gameplay has you exploring different dungeons, called an Abyss, from a first person perspective.

You create your entire squad at the beginning of the game, or you can have the game create a pre-made squad for you. There’s actually quite a bit of variation here, as you have over 40 character portraits to choose from. After that, you’ll need to choose a Blood Code for each character, which is basically an affinity dictating the different skills and abilities they’ll learn. Again, much like the story, character creation and equipment throws a ton of terms and ideas at you that you’ll need to read up on to really learn.

The Blood Code system does alter how your characters function in battle, but the combat system doesn’t feel deep enough to make it really matter. You bring a squad of six characters with you in battle and can choose different options like fight, item, run, and spells from a first person perspective. Physical characters generally only have the option to attack, and as you level up you’ll learn more abilities that are mostly passive.

A Unity Gauge builds up over time, allowing you to launch deadly cooperative attacks with your entire party. Enemy types are also nicely varied, and some battles give you a chance to pick up an item. The catch here, though, is that the item is usually laced with a trap, making you weigh the benefit of trying to disarm it.

For much of the game, the battle system feels very rinse and repeat, just selecting attack over and over and healing occasionally. As you progress, things open up a little more as you unlock new abilities, and luckily there are options that let you speed through battles with just a few buttons. However, this doesn’t negate the fact that battles more often than not feel arbitrary, which is disappointing, considering how many options you have for creating characters.

Equipment systems and leveling up happen at your base where you can use the Development Lab and Medical Lab respectively. The development lab lets you use GP that you gain from missions and beating enemies to develop new items, attachments to your weapons, and more. Meanwhile, the Medical Lab is where you can restore your party’s health, and level them up once they’ve accrued enough experience. Once again, Operation Babel does a poor job of explaining its multiple systems to you, like which characters can equip which weapons, how leveling up works, and what all the stats mean. You can read through the Squad Manual to get a better feel for things, but you’ll spend much of your time in Operation Babel buried under confusing and cluttered menus absolutely filled with different numbers and stats. Terms like XTEND Skills, Glitched Characters, Exhaustion, Code-Break, and more all come into play, but their impact is muddy at best, even when reading up on their effects.

The Abysses scattered across the city of Tokyo bring a little bit of variation to the game, but the graphical style feels a little dissonant. The characters portraits and key art featured in Operation Babel are all vibrant and well drawn, and by comparison, the muddy textures of the Abysses just feel a little out of place. However, each one does feel clearly defined and unique, such as a dense bamboo thicket or haunted house carnival attraction, adding some much needed variation.

Another issue that pops up is how needlessly confusing and labyrinthine some of the Abysses feel. Minor puzzles are used in each one, along with certain tiles that you walk on which causes an adverse effect on your party. The twists and turns of dungeons can get especially confusing sometimes, however, especially with the amount of backtracking necessary. Items of interest in each area are noted with icons, with everything form special Variant battles to story moments, which are sometimes highlighted by key art. Each Abyss is initially interesting as a change of scenery, but can oftentimes become repetitive as they drag on.

As you battle more and more foes in an Abyss, a gauge in the top left of the screen will rise, known as the Rise & Drop system. With each rise of the gauge, stronger enemies will appear in the Abyss, with the chance to gain more experience and better items. It’s a risk and reward system that adds some nice variation onto your exploration. The good news is that you do have the option of leaving an Abyss at any time to heal up and equip your squad.

There really is an overwhelming number of options and stats in Operation Babel, to the point where it seems like every Abyss is introducing something new that adds another unnecessary wrinkle onto the game. There is fun to be had here, the art is oftentimes great, and the story plays with some intriguing and dark ideas. However, Operation Babel just asks too much of its players with everything. It takes hours to fully grasp its system, and get to a point where you feel confident about what’s going on. Even then, the mess of numbers and menus were never a joy to wade through, as I’d spend tens of minutes between missions trying to figure out what new items I could make or what I should even be equipping on my characters.

The tediousness of exploration, battle, and menus really bog down Operation Babel, in spite of what the game does well. Abysses can be fun and interesting to explore, and the mechanics of the game certainly get easier and deeper as the title goes on. There are strong core concepts in Operation Babel, and you’re sure to find enjoyment if you like first-person dungeon crawling experiences, and colorful characters. However, go in knowing full well that it’s going to take time to firmly grasp the mechanics at play in Operation Babel, and the title definitely demands patience from its players. Even so, there are other dungeon crawling options on the Vita that don’t suffer from the same issues as Operation Babel.