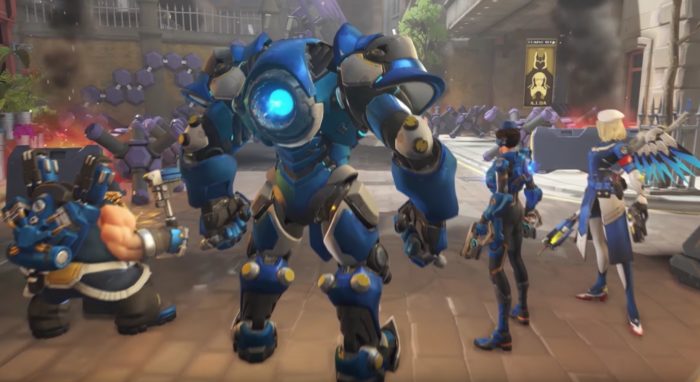 Overwatch is considered by many to be one of the best multiplayer shooters released in recent years, but some may be unaware of the rich lore and stories hidden behind the various characters. While some of this information is discussed via the actual Overwatch heroes interacting in-game, players rarely get fully fleshed out story moments due to the limitations of the game’s focus. This was supplemented by comics and animated shorts, but Insurrection marks the first true narrative moment players are going to experience. The second PvE activity introduced into the game (the first being Junkenstein’s Revenge back in October) that showcases Tracer, Mercy, Torbjorn, and Reinhardt fighting their way through hordes of Omnics.

What’s special about this event is that it will be taking place in the past during riots throughout London. This directly places players in the shoes of the heroes during this crisis and allows them to have a deeper understanding for not only the lore of the game, but the map of King’s Row itself. By looking to the past, Blizzard allows players to understand the events and details surrounding the base King’s Row map in a way they might not have. While fans of this title should absolutely read the comics, these aren’t included in-game, meaning that casual players won’t have a ton of context for the current events of Overwatch. Insurrection adjusts this issue and makes this title’s lore far more accessible than it currently is.

Yet, it goes beyond this one game mode because despite some tidbits from the Sombra animated short, Overwatch’s main narrative isn’t exactly going in any particularly interesting or new direction. The game has been circling around this “will they or won’t they return” idea for the main heroes and it’s offered nothing special when it comes to developing the characters in thoughtful ways. Having more events set in the past gives Blizzard the opportunity to explore the actual personalities and incidents that shaped the characters many of us typically attribute to a look, play style, and one-dimensional personality. Getting a chance to actually see what issues and moments shaped our characters’ perspectives of the world helps push Overwatch beyond just being a class-based shooter.

Events like Insurrection are even more important since Overwatch has no PvE activity, even after the implementation of the arcade function. Everything is PvP, meaning that it becomes especially difficult for Blizzard to tell and explain the stories that surround the various maps, modes, and heroes. Only those who are willing to look around for small details or listen for specific voice lines will understand events in a broader context. This can be seen during King’s Row where the actual payload’s meaning is pretty hidden except for a single voice line by Junkrat that explains the attackers are getting paid to deliver an EMP bomb to an Omnic slum.

You can easily miss this, along with why people would want to even destroy the robotic section of town, but thanks to Insurrection, we now have a better understanding of the hostilities between humans and machines. By having other events that reference the past, we could get better context for why the attackers need to escort a limo in Hollywood or why there is an attack happening at the Omnic sanctuary in Nepal. These are all fantastic maps from a design and visual perspective, but their meaning is hidden away from the player entirely. That’s not to say that every map Overwatch has needs a PvE game mode, but as Blizzard continues to give us special events that flesh out the game’s lore, looking to the past may not be such a bad thing after all.