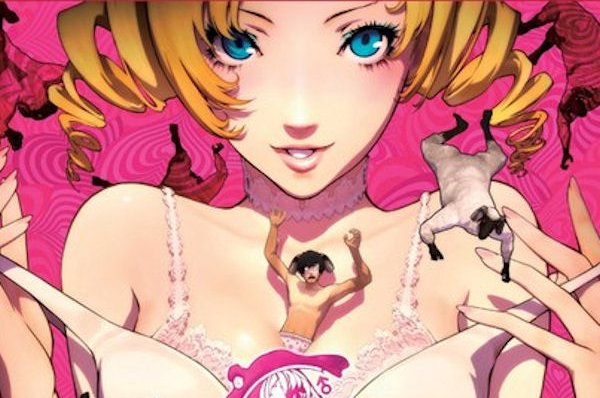 Persona 5 may be the talk of the town for Atlus, but it certainly isn’t the first time the developer has released an insanely stylish, and thematically mature title. In fact, many of the visual cues of the new title seems very much inspired by an incredibly overlooked gem from last generation, Catherine. The title is a prime example of how a game can impose huge thoughtful questions to its player, and meaningfully link that with its gameplay. With Persona 5 hitting huge success while it deals with dark and mature subject matter, it seems now more than ever we need a sequel to Catherine.

Catherine was released back in 2011 for the PS3 and Xbox 360, and developed directly by the Persona team. Because of this, it retains a similar art style and heavy subject matter that the Persona series traditionally employs. You play as Vincent Brooks, an average ordinary guy with a girlfriend named Katherine he’s been dating for years, who wants things to get more serious. Catherine starts with Vincent in this conundrum, not knowing if he wants to take things further, or if he’s even ready to. Then one night while hanging out with friends at his favorite bar, The Stray Sheep, Vincent meets a gorgeous, seductive blonde named Catherine. He wakes up the next day with her in his bed, and no recollection of what happened the night before.

Catherine is a game all about moral dilemmas, focusing on not only how Vincent views relationships and commitment, but how the player views it as well. During the day the story advances, Vincent has to live his every day life, and in the evening he usually winds up at the Stray Sheep. During the night, however, he’s pulled into horrible nightmares that force him to ascend a foreboding, seemingly endless tower as his guilt continuously increases over cheating on Katherine. Although not quite to the extent of Persona, the game still has an interesting blend of puzzle gameplay along with just living as Vincent, talking to friends, answering texts,  and sorting through his issues.

Catherine is a puzzle-platformer unlike any other, and the night segments have you piecing your way up a platform made up of different blocks. You can climb the blocks, push them, all the while the stage is collapsing underneath you. Each night requires you to keep advancing up the tower or die, and each Nightmare stage is interspersed with waiting areas filled with other men in this dream world. All the men take the form of anthropomorphic sheep, and each has some kind of intense worry or problem.

The gameplay segments of Catherine are absurdly challenging, to the point of frustration at times. While this can be a barrier for some players, it does represent Vincent’s mounting dread and guilt over how things are playing out. Adjustable difficulty levels can make things easier, and to this day we haven’t seen any other game that plays like Catherine. It’s almost baffling as the game’s systems allowed for puzzles that were incredibly quick and frenetic, while also strategic and challenging. Its’s a system that we really should see again in some form, and a Catherine 2 would obviously be the best way to do that.

In each rest area Vincent has to step into a confessional booth, and answer a moral question before continuing to the next stage. Now these aren’t easy question, oftentimes posing seriously thought provoking dilemmas to the player. For example, one question asks “Is it ok to live with your partner without ever intending to marry them?” While another poses the question, “Could you show everything in your inbox to your lover?” Catherine poses some seriously hard questions to the player, and the character of Vincent becomes more of a filter for how the player actually feels about relationships and romance. The key piece of Catherine, however, is that none of its issues are trivialized. Each moral question has two answers, but it never feels like one is the “right” answer.

Catherine doesn’t judge the player on their answers, instead crafting the story and game’s ending based on what you choose. Questions get into very personal subject matter like sexual preference and if something like lying is wrong, but again, Catherine doesn’t tell the player they’re bad for choosing an answer. Rather, each question contributes to a morality slider, with blue representing Law and red representing Chaos. Depending on where Vincent falls on that slider and few other critical choices, you’ll receive one of the game’s various endings. Each ending represents a possible future for Vincent, whether he prefers an orderly, lawful life, or an anarchic chaotic life. Vincent isn’t the typical hero either, as he’s definitely a deeply flawed man, represented by how he approaches life in general. It was refreshing to see such a flawed representation of the “every man,” and something we could use more of.

It’s incredibly rare to see a game like Catherine deal with such difficult moral questions, and not judge the player as either good or evil. Morality almost always works on a good or evil scale in video games, but Catherine separates itself by first not using that terminology, and then creating multiple endings for the player based on their playstyle. The game recognizes that morality is all shades of grey, and wants the player to experience their own story. This isn’t even to mention how few games really exist that tackle tough questions about sex, love, and romance, but also handle it in such a mature, though-provoking way.  It’d be a shame to not see Catherine come back, and take things even further with new hardware, and some fresh ideas. Even six years later, we’ve gotten very few games as morally engaging.

This is all helped by Catherine’s unique sense of style. Every bit of the game oozes a unique flavor, from the visuals to the soundtrack. Similarly to Persona 5, Catherine designs its menus with sleek graphics and designs, with the primary colors of the game being pink and black. Like Persona 5, menus and options often pop up off of characters, and there’s even a text message system in Catherine as well. The anime-ish art style works wonders for the game, as characters are all animated fluidly, especially in the Nightmare segments. Many of the visual cues in the game are made up of traditional male and female symbols or ideas, only helping to drive the game’s theme even further.

The game’s soundtrack is composed by Shoji Meguro who’s also responsible for many of the Persona games. It has distinctly jazzy feel to it, except for the Nightmare stages, which brilliantly combine famous classical pieces with some new beats. You can see definite inspirations from Catherine to Persona 5, including more realistic characters that are highly animated and similar looking locations, like the similarities between Cafe Leblanc and the Stray Sheep.

Catherine was a game that no one expected, seemingly coming out of nowhere in 2011. To date the title has sold nearly 500,000 copies in North America, no small feat for an obscure thematically intense Japanese game. Atlus has once again showed they care about serious storytelling that really hits personal notes with Persona 5. Not to mention the brilliant visual and audio design of it as well. At this point, a Catherine 2 seems like an obvious step, and a title that we sorely need both for its storytelling and unique brand of gameplay. Vincent’s story is over, of course, but Catherine isn’t beholden to that character. Its themes of love, lust, and relationships just need to be there.

To this day Catherine is still a shining example of morally engaging storytelling, style, and smart puzzle gameplay. It’s time for Atlus to show us all how it’s done once again.