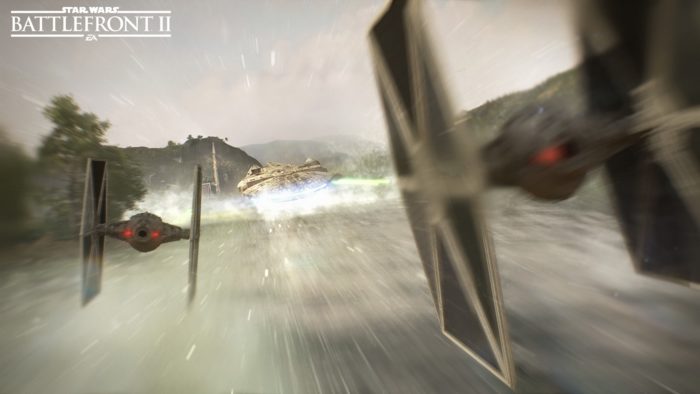 During Star Wars Celebration in Orlando, Florida, EA held a press-only panel with team members from DICE, Motive, and Lucasfilms to reveal some behind the scenes glimpses into the upcoming Star Wars Battlefront II. A frequent criticism of the first game was the lack of a story driven single player experience. It’s an issue the team is clearly aware of now, and their goal is to deliver a quality story this time around.  While discussing the story during the panel, new light was shined on what players can expect.

It turns out that development on Star Wars Battlefront II started when The Force Awakens was in theaters. The primary question that got the ball rolling was as simple as, “What happened after Return of the Jedi, and before The Force Awakens?” The Death Star blew up, but what then led to Starkiller Base?

This central idea shaped the life the single-player campaign would take, and it helped Mark Thompson, Game Director at Motive, pitch his story to Lucasfilms and move forward with the plans. He wanted to know what made The Empire tick, basically, and the hurtful loss they endured after Episode 6 will be told within the campaign for Star Wars Battlefront II.

The goal, according to the team, is to tell a story that paints The Empire not as villains, but as simply members of another side of the conflict. They were people led by the ideals that The Empire was order and Rebellion was chaos, so their entire path was shaped in a completely different way than most of the heroes in the Star Wars universe. From their perspective, they are the heroes.

In fact, Thompson noted that they didn’t want to ever say they were the villains of the story. These were elite soldiers that struck fear into their enemies’ hearts. It’s just that those enemies happened to have been the Rebels. The explosion of The Death Star may have been a huge win for the Rebels, but we didn’t really consider how the “villains” might have felt. This was an act of war, and they would want to get their revenge.

That’s where the new protagonist Iden Versio to the story comes in. She’s a hybrid elite that’s been made to be an all-around badass, and she’s out for blood. Her father was a high-ranking official within The Empire, so it’s natural that upbringing would lead her to believe their way of doing things was the best way. That may register for us as her being a villain, but it appears they definitely want to change the perspective and get us rooting for her to shoot herself some Skywalker. And, while they did reveal that you won’t just be playing as the protagonist (Luke Skywalker was revealed as another character), the majority of the game will be her and The Empire’s point of view.

With fans all over being able to sympathize with the likes of Darth Vader and Kylo Ren, there’s no doubt that something like this can be pulled off. Only time will tell if the single player campaign’s story can turn us into believers in The Empire, or cement the idea that exploding every circular base they make is always a good idea.