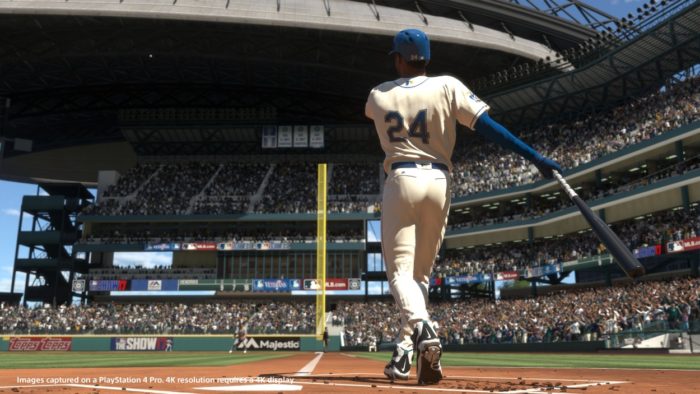 If you’re here, you’re probably struggling with how to get your player promoted as to the big leagues as quickly as possible in MLB The Show 17’s Road to the Show (RTTS) game mode. Before we dive into a few tips for getting called up as quickly as possible, know that it can be a bit random and even if you utilize these tips, you still might have a hard time. Complicating things a bit more than usual is the new Pave Your Path RPG that is intertwined with RTTS.

Still though, eventually you will get called up provided you aren’t trying to actively sabotage your player’s career on purpose. That said, there are some ways to potentially speed up the process.

If your goal is major leagues or bust as soon as humanely possible, ensure that you’re setting yourself up to that before you even start playing games. Pick a position that’s in high demand and land yourself on a team that desperately needs that position. There are three outfield positions so that’s a possibility. Everyone needs a handful of starters and relief pitchers, so that could be a good place to start as well. Being something niche where a team would only carry one or two of, for example a Catcher, could make things unnecessarily harder.

Also, know what kind of player you want to be before you lock in your initial stat distribution. Don’t allocate all your initial points into power, and then change your mind and decide you want to be a speedster instead. Otherwise, you’ll slow yourself down as you’ll have to waste training points repairing that mistake later on instead of investing into something you’re already good at and making it major league quality. Note that depending on what position you pick, you’re going to have different base stats, so make sure to factor that into your final decision.

New to MLB The Show 17 is a RPG-like mode called Pave your Path, which attempts to make your journey to the big leagues more of an experience rather than a seemingly never ending of series of games/practices that persists until you retire or get tired of it.

During MLB The Show 17’s version of RTTS, you’ll watch cut scenes, and be faced with choices that will impact the progression of your career, and how your story unfolds. The game is still new as of this writing, and we don’t have the nitty gritty on how ever single choice you make will directly impact your chances of being called up, traded, etc., however some of the decisions should be obvious.

Act as maturely as possible, and be flexible when your manager asks you to try different things. For example, he could ask you to play out of position for a while. Maybe you don’t want to do that, and you might decide that you want to try and find a new team to play for that wants to use you at the position you started with. However, being open minded could lead to opportunities for you to showcase your abilities, impress your digital manager, and worm your way into a MLB starting lineup quicker than usual. Stick to your guns if you want, but be prepared for your road being a little bumpier than someone else’s.

This one should go out without saying, but it’s still worth saying anyway. Obviously, the better you play, and intelligently allocate your training points to improve your overall rating, the better chance you have of getting called up. Training points are your lifeblood, so you need to make sure you’re doing everything you can to get as much as possible.

At its most basic level, the better your player is in RTTS, the more likely it is that you will be called up because if you have an overall rating higher than someone else on the next roster in the same position, at some point you’re probably going to take their place. Sure, luck does play into it as well, if someone above you gets hurt, but still, you want your player to be as highly rated as possible.

The most important factor for achieving that goal is to intelligently allocate your training points. Try not to waste a single point if you can. If you’re goal is to be a speedy, athletic shortstop that steals a bunch of bases, don’t be waste points on your left handed power. The opposite applies as well. If you’re a power hitter, you probably don’t need to worry about drag bunting too much.

Sure, there’s an element of playing to your strengths whatever your position is, and you might be naturally inclined to spread your stats out evenly, but don’t do that. Focus in on a niche, and spend your points to elevate that specific skill set as high as possible.

That does it for our tips on how to get called up in RTTS as quickly as possible in MLB The Show 17. Have your own tips and suggestions? Let us know in the comments below.