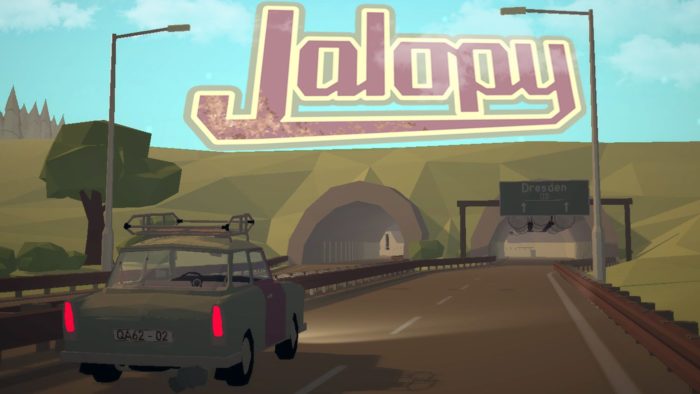 There was nowhere to go but everywh – well, actually I had to get to Dresden pretty quick because my carburettor was overheating, but the spirit of Kerouac was still thick in the air. Jalopy is a game that revels where others look to circumnavigate. Gone is the spirit of competition you’d find in a racing game; absent are the objective markers of the open world adventure, piercing the world through in garish colors and rushing purpose. Here you just drive and behold, picking your route on your road map and then watching the world fly by the window.

There are destinations and goals in Jalopy of course; they just take a backseat (sorry) to the act of driving itself. Greg Pryjmachuk, the game’s creator, seems like a man unsatisfied with the state of driving games, attempting to capture something new. An ex Codemasters designer, Pryjmachuk cut his teeth working on the F1 series. Three years ago, he broke off and started up his own studio, Minskworks. Jalopy couldn’t be further from the pornographic polish of so many racing games; in fact, it isn’t a racing game – it’s somewhere between a simulator and an adventure. You are to drive a decrepit Laika 601 Deluxe (a spin on the Trabant) across the Eastern Bloc in 1990, exploring, trading, smuggling contraband, getting by.

In shifting focus from destination to journey, Jalopy joyously rolls around in the clutter and minutiae of running a car, not just driving it. There is, actually, an awful lot of stuff to do here and whereas you might think freeing yourself to just drive would mean less on your itinerary, Minskworks has dropped in a healthy dose of simulator to the mix. You’ll be exploring, picking up cardboard boxes from the side of the road, pilfering the contraband they might hold with a view to making some quick cash, and all of a sudden you’ll notice the telltale curlicues of smoke rising from your bonnet. Your engine is overheating.

Hopefully you’ve kept your trunk well stocked because you’ll need to make some hasty repairs to your engine with a toolbox; you’ll need to top up your fuel tank with the optimum amount of oil mixture to properly lubricate the thing; and you might need to top up the water tank too because that windscreen can get dirty fast. These things serve masterfully to make you deviate from your path – like all great adventure games do – and you’ll be stopping off in motels, garages, and shops for rest, parts, and supplies.

There’s a holistic economy to the way that you accumulate resources. From the jumble in your trunk to the debris on the roads, everything can be sold. As you do so, your money – which is kept track of by checking the value of the banknote sticking out your wallet – can be spent at any of the Laika garages to purchase new parts: off-road tyres, efficient engines, and extra storage space. The utilitarian approach to Jalopy’s design complements its art wonderfully, the two working in harmony to deliver an experience as stark as it is rich.

You might think that the Eastern Bloc in 1990 would be a barren, gloomy place – and it can be, but Jalopy lovingly smudges the landscape in that gloom. Clean lines, block coloring, and sensible elegance culminate in a style reminiscent of a Maurice Binder title sequence. Wending your way slowly around hills dotted with soft, dull-green trees; slipping into a tunnel and hearing the natural world rip away, replaced by the hoarse rattle of your Laika’s engine bouncing off the walls; Jalopy delivers, in simple, understated terms, the sheer joy of driving. In fact, what a perfect time and place to set a game concerned with the shifting, surging power of being able to just drive, of the simple act of crossing a border. What a time to release such a game, too.

It’s in Early Access right now, and at $12.99 it’s absolutely worth the ticket to ride. The driving adventure is an unusually rare thing, where you’d think it would be more commonplace. We are saturated with racing games and simulators, and indeed the publishing cheque here is being picked up by Excalibur Games – the publisher behind American Truck Simulator – but this is a unique animal. It seems in recent years the road trip has risen to the fore: AAA juggernauts like Final Fantasy XV have showed clear yearning for the spirit of adventure and mobility, and even something like The Last of Us – where driving doesn’t even feature – pines for the freedom of movement, of escape in Joel and Ellie’s journey west. Jalopy is a manifestation of these desires in an intriguing curio of a game. And here’s the thing: playing it just feels good, like you’ve got the bug. To bastardize Kerouac once more: “the bug was on me again … I was off on another spurt around the road.”