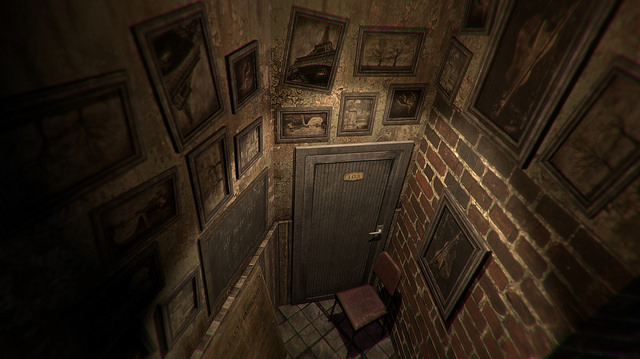 What’s really wonderful about Dying: Reborn is that right from the start, you can sense there’s something not quite right – even without playing the thing. Granted, there’s a culture of obnoxious subtitles that don’t mean a whole lot in context – absolution, conviction, revelations – but Dying: Reborn really sets itself apart. Does it refer to the process of dying itself being reborn? Is it that your character is dying, but will be reborn? I’ve finished it and I couldn’t tell you.

It’s a room escape game, owing a debt to schlocky horror films like Saw and Hostel – and of course more pertinently Resident Evil 7, with its Birthday tape and its Bedroom DLC. Here you play protagonist Mathew; waking up in a strange basement with no memory of how he arrived, or where he is, he must solve a series of elaborate puzzles to escape each room and find out what’s going on. All the while he’s stalked and tormented by an enigmatic figure wearing a fish head mask.

Reeling from one dank chamber to the next, Mathew groggily tackles one ornate, daft puzzle after another. The amused satisfaction you feel at not just solving a puzzle, but in realigning your brain to walk in step with the game’s jumbled patchwork logic is tangible. The same cannot be said for the feel of exploring these rooms. Mathew lacks any kind of physicality. He doesn’t hold objects; they float in front of him. Keys slide into locks of their own accord and in one surreal moment, a knife and fork operate independently, Mathew’s hands dissolving into the environment. It conjures the feel of being a camera, slinking through rooms and retreating into exactly the kind of voyeurism belonging to those films from which it borrows. That in itself would be an interesting idea; the only trouble is that Mathew is anything but absent. He’s a character all his own and certainly isn’t silent, voicing his protest in every new room he arrives in.

This protest comes by way of some laughably bad voice acting. It’s the sort of laugh that might give you a twinge of guilt because unlike the mythical performances of Resident Evil, this is restrained enough that it feels every bit a genuine attempt at conveying emotions. They’re just often the wrong ones – Mathew will act irritated and bemused where perhaps disgust and terror would better fit his predicament. The game also seems to laugh at itself at times – which is a wonderful thing, it’s just that I don’t know if it means to. There is a moment, fairly late in the game, where Mathew remarks on the idea of him continuously fainting and waking up in new rooms – he does so in a sort of sarcastic, knowing way, but it’s difficult to tell if it’s once again the fault of poor voice acting.

There are inexplicable touches here and there that are so rubbish I have fallen in love with them entirely. Firstly, the loading screens – of which there are many and lengthy, too – have the symbol of an SUV on them, its wheels turning to show the dim mechanism of the game’s innards lurching to life. Why? There’s no SUV in the game; it doesn’t mean anything. Also, it doesn’t say ‘loading’ at the bottom of the screen; it says ‘loadying,’ with the ‘dying’ bit in red font. It’s a delightfully misjudged piece of word play which, again, doesn’t mean much, but gives you the sense of someone reaching for something and not quite hitting the mark – only I’m not sure what the mark ever was. It’s likely the shaky translation from Japanese and the poor voice acting that contribute to this unintentionally funny feel, or perhaps it’s all a self-aware, brilliant joke. I doubt that, but you never know.

The troubles don’t end there. Solving a puzzle, in any context, comes down to two things: solution and execution – working out what you have to do, and then doing it. Most games will make finding the solution the bulk of the puzzle, with the execution a formality. Some great games – Prince of Persia: Sands of Time, Portal – treat both parts equally, with the act of actually moving the right piece to the right place a joy in itself. Dying: Reborn has problems with execution which, at times, derail you completely. At one point I was able to hover over an object over a low wall so that the reticle turned red – indicating it was usable – and it said something along the lines of ‘the object is out of reach.’ I was exploring for about twenty minutes, looking for a reaching device of some sort (at that point umbrellas had come in handy twice for the very same thing). In the end, it turned out that if I walked into wall, squashing right up against it, I could actually get at the thing without any tool. There are a couple of problems with this: it ignores a previously established, recurring mechanic, and there isn’t any logic to it, never mind being inelegant.

The game’s chassis lets out creaks and groans under the strain – though the game hardly looks taxing. Frame rate stutters accompany very odd graphical glitches like graffiti hovering in front of the wall it’s supposed to stain. The sound design is also botched. There’s one sound for Mathew’s footsteps; it doesn’t matter how fast you’re moving, from creep to canter, the sound never changes. Sounds will get cut off abruptly instead of blending with the rest of the mix, and frequently don’t pair with the subtitles offered on screen.

Despite this generous clutch of problems, there is an odd charm to the game. Its schlock is part of its allure, and each time I loaded it up, I felt as though I was returning to a well-thumbed piece of pulp horror trash or sliding an old VHS B-movie slasher into the machine – its cheap ghouls awash with scan lines. I found myself smirking way more than I was frustrated, but I can’t in good conscience say it’s worth picking up outside of the bargain bin you’d find the films it takes its cues from.