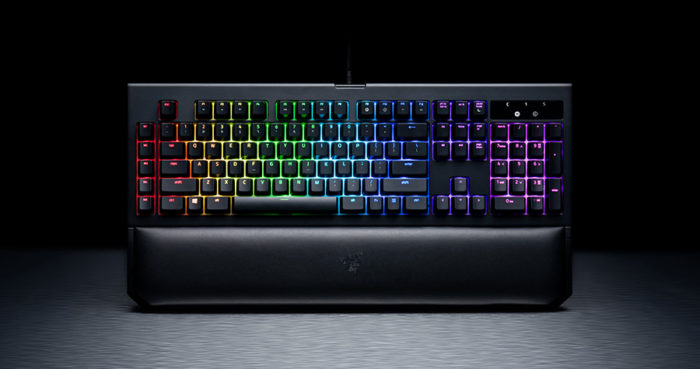 Razer’s Blackwidow Chroma keyboard is one of the best on the market, just ask anyone who’s ever had the opportunity to use one. They’re comfortable, have tons of customization, solid key switches that boast incredible longevity, and have a sleek design that add to the appeal of any gaming setup. With that being said, it was tough to figure out just how Razer could improve on such a solid option. With the company not content with just leaving everyone to wonder, they recently released the Blackwidow Chroma V2 mechanical gaming keyboard, adding a few new features to an already impressive kit.

When we say “a few,” we mean that quite literally. The few improvements that are added are pretty neat, with one of them being a standout thanks to how it changes how you can play. This refers to a new switch option. Razer mechanical keyboards have proprietary key switches that you won’t find anywhere else, and they previously came in two colors: Green and Orange. Green is the super clicky option that allows you to feel and loudly hear each keystroke. Orange is much less audible, but still has that tactile feel that you can only really get on a mechanical device. It also has a shorter distance to its reset point, allowing for quicker inputs. Both are good options, but Razer decided to go for a third that will be a welcome addition to fans of FPS and MOBA games.

The Yellow switch is the new kid on the block and offers a “Linear and Silent” experience. This means you don’t get to feel the click you normally get with these types of devices, and its extremely silent. You still get the reliability of it being a mechanical keyboard, but without the song and dance. The yellow switches also have the lowest Actuation vs. Reset Point distance, allowing for rapid inputs without having to give your fingers too much of a workout. While I’m personally 100% content with the Green switches (just something about that sound), this is definitely a smart option for Razer to include. Streaming is immensely popular, so having a keyboard that caters to this particular arena of play is a no-brainer. Having loud clicks in your gameplay audio isn’t that appealing to your audience.

Other features of the Blackwidow Chroma V2 include five programmable keys that you can set to do whatever you want. They’re blank slates out of the box, but they can be set to perform macros, launch things like Steam or other programs, and whatever else you may need to use them for. When combined with the standard function keys along the top of the keyboard, you have no shortage of shortcuts to keep your gaming streamlined.

Also, every key on the device is individually backlit, allowing for loads of customization with Razer’s 16.8 million color spectrum (yeah, that’s a lot of colors). You can set each key separately, highlighting those that are most important to you, or even setting cool effects such as Ripple (sends colors rippling across the keyboard from the key you press) and Fire (which gives the impression that there’s a fire crackling beneath your keys). It’s a nice touch for those who really want to make their gaming space stand out.

The Razer logo in front also lights up and is customizable, just as it was on the previous Chroma iterations. However, the Blackwidow Chroma V2 also comes with a removable wrist rest that blocks this (not that it’s an issue). If, like me, you find yourself in front of a keyboard for extensive periods of time, it’s a handy little add-on to keep you from cramping up. Sure, it’s not some high-tech addition, but I could never say know to a device that cares about my well-being.

One thing to note is that you do need the Razer Synapse software to take full advantage of this new member of the mechanical keyboard family. This isn’t a surprise to anyone who’s owned Razer products in the past, but may sound like a nuisance to someone just stepping in. It’s a great piece of software, though, and it allows even those who aren’t very tech-savvy to customize their shortcuts and lighting, as well as edit macros. Nothing saves on the keyboard itself, so you’ll have to use this at least once if you want to make use of the five programmable keys. Thankfully, it’s new user friendly and doesn’t get in the way of you and your gaming experience.

All in all, the Blackwidow Chroma V2 is a worthwhile mechanical gaming keyboard. I will admit that it’s a tough sell if you already have a Razer mechanical keyboard (or any other brand for that matter), since it doesn’t do much in the way of “new.” The Yellow switches are definitely a welcome option for MOBA and FPS players, so if you’re looking for something that allows you to play quickly, that particular model is right up your alley. Otherwise, either model is a great replacement for a keyboard that’s heading out the door. And, if you’ve been looking to make the jump for the first time to a mechanical keyboard, you really can’t go wrong with $169.99 for Razer’s latest creation.