The PS4 version 4.50 software update looks to be adding a new feature to Sony’s latest hardware. Boost Mode will be added to the PlayStation 4 Pro in order to bump the performance of games that haven’t received explicit PS4 Pro enhancements.

Here’s the system description for Boost Mode: “Experience improved gameplay, including higher frame rates, for some games that were released before the introduction of PS4 Pro (CUH-7000 series). Turn this off if you experience unexpected behaviour during gameplay.” 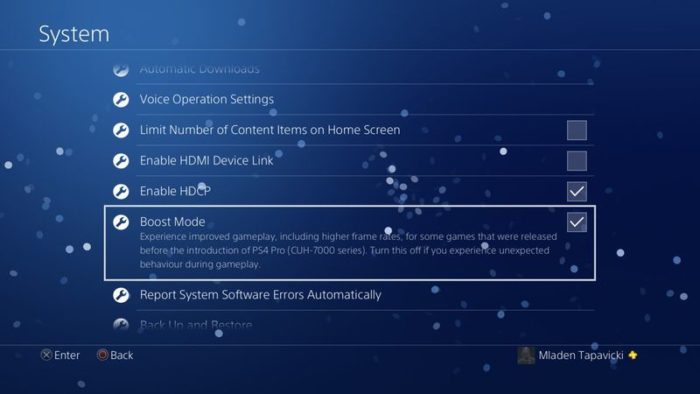 Essentially, games on the PS4 Pro run as well as the developers have coded them to. The system is fully compatible with the PS4 library, meaning the CPU is largely the same as that in the regular PS4. It’s the GPU that’s received a large upgrade, and teams need to implement upgraded features, like 4K resolution, for their game to really perform differently on the Pro.

With Boost Mode, the PS4 Pro will “run at a higher GPU and CPU clock speed in order to improve gameplay on some PS4 games that were released before the launch of the PS4 Pro,” a Sony spokesperson told The Verge. “Games that have a variable frame rate may benefit from a higher framae rate, and load times may be shorter in some games too.

The video below compares The Evil Within with and without Boost Mode, with the boosted version showing a visibly smoother framerate.

PS4 System Software Update 4.50 will also be adding support for external HDD, the ability to set screenshots as custom wallpapers, and a simplified notification system. You can check out all the changes here.