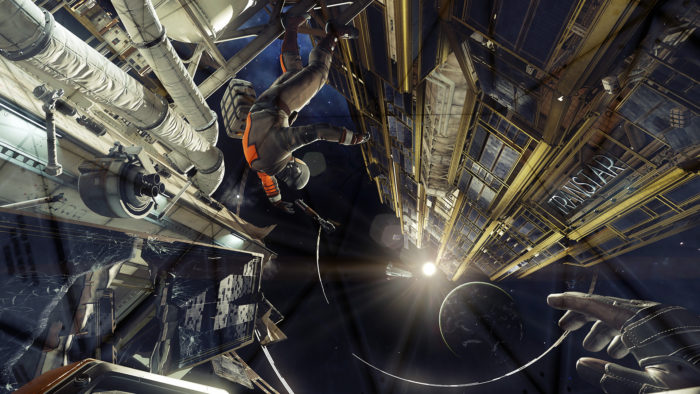 With Arkane Studios set to launch Prey soon, we got a chance to talk to lead designer Ricardo Bare about the sci-fi title’s gameplay and open world. The Talos I space station doesn’t resemble the studio’s recent Dishonored games, offering a near open world to explore, and plenty of spacewalking opportunities.

“The space station itself is one huge mission,” said Bare, noting the contrast with Dishonored’s piece-by-piece mission structure. “When the game first starts, you have access to like 20% of the station, and the more you gain abilities, and the more you progress through the main story, the more that opens up. Until finally the whole, huge station is open to you, and by the second half of game you’re just running all over the place doing side quests, doing the main story, going up and down, all kinds of stuff. We like to call it an open space station game, basically.”

Part of that open station lies outside. Arkane has designed the Talos I exterior to be a zero-gravity playground, allowing players to spacewalk the entirety of the station’s surface, and even find entry points to new locations.

“Once you get access to the exterior, it’s not a one-off level,” Bare continued. “It’s not like a gimmick or a special set piece. It’s totally open, totally simulated.”

All of this space ultimately leads to more choices for the player. According to Bare, it’s up to the player to decide the route to their destination, be it a suspicious elevator or a vacuous airwalk.