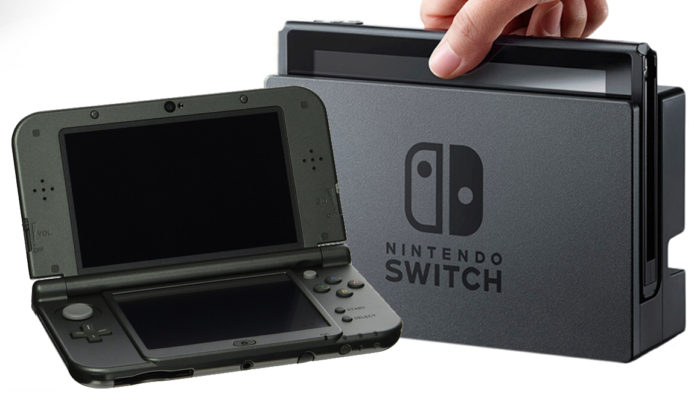 Multi-colored Joycon controllers aside, the Switch is much less toy-like than previous Nintendo consoles. If the Wii U’s tablet had a tacky Fisher-Price finish, the Switch is more of a sleek and sexy MacBook Air. Its aesthetic suits Switch design philosophy: to cast the widest possible net, targeting a more varied audience beyond just children.

Hybrid gaming is now the focus of Nintendo’s hardware innovations, but its intention to consolidate both markets has called into question the future of Nintendo’s dedicated handheld systems. Nintendo’s president Reggie Fils-Aime was quick to quell concerns that Switch would oust the 3DS, suggesting that the ecosystem would remain a shared one. But you can forgive some players, including myself, who remain rather skeptical about that. It’s hard to shake the feeling those words are somewhat of a smokescreen to appease 3DS’s significant following.

A recent interview, in which Nintendo’s president stated it was not developing a successor to the 3DS, has added fuel to that fire. More than ever, it now seems likely that the company is focused entirely on Switch and is set to wind down support to its secondary hardware. That notion is likely to upset 3DS owners and proponents of dedicated handhelds. Yet, in order to market their Switch console effectively as an all in one gaming solution, this is a calculated and clever move from the big N.

Not counting the Wii, Nintendo’s home consoles have been slowly declining in popularity since the NES. The Wii U, of course, well… let’s not even go there, but suffice to say, Nintendo didn’t make a return on its investment. For that reason, there is every chance that the Switch might be it for Nintendo; the company’s final roll of the dice in the home console market. Its next console simply must find a substantial market, which won’t be easy considering Sony and Microsoft’s dominance of the industry. Salvation, then, lays with Nintendo’s ability to convert 80 million 3DS owners to the Switch.

Of course, Nintendo has to be cautious in its messaging. In making its intention not to develop any future 3DS console, Nintendo is politely ushering 3DS owners toward Switch. This rhetoric so far is rather reminiscent of the Gameboy Advanced/DS situation a decade ago – coexistence quickly became a replacement, even despite Nintendo’s claims to the contrary. We’re not quite there with 3DS yet, but by painting a future without a direct successor, it’s suddenly a far less appealing mobile gaming system moving forward than Switch.

Funneling all future content to the Switch, and only the Switch, is a good thing, not an unspeakable evil. Nintendo needs the Switch to capture a much bigger audience than Wii U, and then keep that momentum going strong. Wii U owners upgrading to Switch aren’t enough in number to ensure its success, and Nintendo can’t rely on Sony and Microsoft players to pick up the slack. At the moment, there’s just no room to consider 3DS successors; it’s time to put all the eggs in one basket and make the Switch stick. And that means enticing 3DS owners.

In fact, the speed with which Nintendo have commented on the future of its dedicated handhelds almost inspires confidence. Clearly, Nintendo believes in Switch’s potential, and importantly, has a plan in place to ensure its future as a hardware manufacturer. “Force” is too strong a word, but Nintendo is going to have to put up roadblocks to push people into buying Switch. For now, that means reminding Nintendo fans that Switch is the future of both its handheld and home console market, and might one day mean ending 3DS production sooner rather than later.