The Nora are the first tribe you’ll come across in Horizon Zero Dawn. Often clad in blue and muted colors, Nora is an isolationist tribe with a heavy matriarchal focus. They worship All-Mother, a nature goddess, and are forbidden to leave the sacred surrounding lands of All-Mother’s Mountain.

The Nora don’t care for any of the other tribes, and are very much the same kind of focused, fierce hunters that Aloy will find herself becoming throughout the duration of the game. Nora are considered to be mysterious barbarians by the other tribes in Horizon Zero Dawn, likely due to their rather primitive ways and constant warring with the machines.

The Carja are a far more civilized tribe than the Nora. You’ll find them in and around Meridian, often referred to as the City of the Sun.

This tribe is more focused on trading and commerce compared to the other tribes of Horizon Zero Dawn, and as such, the city of Meridian is teeming with merchants for you to visit. Meridian as a whole feels like the most developed area of the entirety of Horizon Zero Dawn, with its large stone structures surpassing any architecture by the Nora tribe.

Unfortunately, the Carja tribe has a rather dark past. The former Sun-King Jiran waged war against the other tribes for sacrificial slaves, and the tyranny didn’t stop until his progressive son, Avad, put an end to the war. This hasn’t left them on the best terms with most other groups, though the initial mutterings of forgiveness can be heard from passersby on your journey.

The Shadow Carja are the most intimidating tribe you’ll come across in Horizon Zero Dawn. This collective is made up of those who wholeheartedly supported the former Sun-King Jiran’s war against the other tribes. After Avad took to the throne and put an end to the violence, these supporters broke off, claimed a citadel in Sunfall – the far west of the map – and renamed themselves the Shadow Carja.

You could make your way through the whole of Horizon Zero Dawn and never come across the Banuk tribe. Tucked away in the very North of the map, you’ll rarely visit their home.

For a long time, the Banuk have lived up in the mountains, trying to live in harmony with the machines that roam the world. Made up of fearless hunters and mysterious shamans, they’re constantly trying to prove their worth against increasingly stacked odds, and favor this over engaging with others.

Due to their isolationism, the Banuk are often deemed to be just as mysterious, primitive, and savage as the Nora tribe. 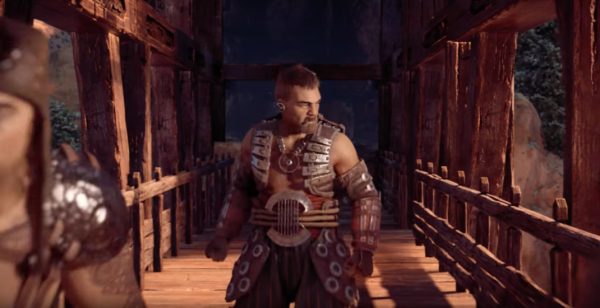 The Oseram are the last of the tribes in Horizon Zero Dawn, and are pretty central to the lore of the game. It was thanks to an alliance between the Oseram and the Carja that Avad could overthrow his father and put an end to the war. As such, Oseram can often be found in and around Meridian, and elsewhere in the desert.

The Oseram are excellent metalworkers and craftsmen, and as such, are best known for their steel and powerful weaponry. Their armor and arms often looks superior to those of many of the other tribes, and their forward nature can often come across as bad-mannered.