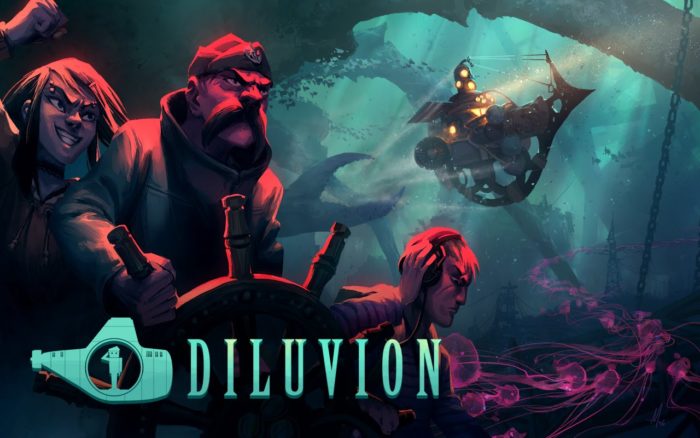 Diluvion is a game that is deeply inspired by subterranean fiction. Fans of Jules Verne will be pleasantly surprised with the game’s adventurous setting. You control a submarine crew scouring the ocean floor for loot, recruiting new members and battling enemy submarines in a desperate and unforgiving underwater environment. A great flood trapped humanity underwater beneath plates of ice, forcing them to dive further into the briny deep as resources become more and more scarce.

The unique setting lends itself to the game’s most appealing element, it’s gorgeous art style. Architectural relics lost in time become trading outposts and bounty hunter jails, as well as abandoned research stations full of loot you can acquire for trading. A satisfying mechanic comes when docking into these landmarks, using rope tension to pull yourself in.

This is also where the game flexes its artistic muscle, as the interiors of the buildings are actually fully stylized, and feature gorgeous drawn characters and backdrops that really give Diluvion a unique aesthetic appeal. Essentially you move from a 3D to a 2D space when recruiting crew members or trading, which adds a great level of depth to the peculiar environment you’ve found yourself in.

The characters you meet are well developed and when grafted on to your crew, give your submarine some extra charm, their intriguing backstories emboldening your desperate mission. You have to place members of your militia around the sub to enhance certain aspects of the ship, including engine power and cannon strength depending on their attributes. This reminded me a lot of FTL and Sunless Sea.

Not fleshed out enough to match the management systems of those titles, the gameplay here instead focuses on the real-time 3D combat that occurs beyond the interior of the ship. Diluvion also makes you consider your resources. Without Scrap Metal you can’t use your cannons, without Oxygen your crew will die, and you need Food to stop starvation. These survival mechanics add a great level of challenge to the game and make it so that you’re always on the lookout for another outpost to forage.

The music builds upon one of Diluvion’s greatest features, which is its ability to create tension. There is a gorgeous, almost whimsical score that travels with you as you glide through the deep; it works in both making you want to take in the beauty of the environment, but also be wary of your surroundings. You must be careful not to sink too low in exploration without the right upgrades, or your ship will be crushed under the weight of the water. Sometimes you have to thread that line and take a risk to find some items or escape enemies, which were some of my favorite explorative moments. If Diluvian does one thing right, it’s the creation of an alluring atmosphere which is complimented by the excellent art and sound design. This makes it powerful in creating real moments of terror and wonder, but these moments can sometimes be marred by the game’s control scheme.

The way you control the speed of your ship is fresh, but certainly something to get used to. You have to scroll the mouse wheel to control your speed, but this means trouble if you’re attempting to turn on a knife’s edge to avoid an object in the environment, or maneuver to flank a ship during a tense battle. It can be terribly frustrating when the game is unresponsive as it switches to a new level of speed.

Whilst I think this was done to create an authentic feel (like you’re controlling a ramshackle rig), I personally found it annoying and a barrier towards enjoying the combat. Maneuvering around whilst constantly stopping and starting made me lose battles due to missed torpedoes and crashing into the environment, and it made the joy of captaining a subterranean ship lose some of its sheen. It’s one of those situations where I would try to avoid battles in the later zones if I could, as I much preferred just exploring. I tried using a controller, but felt that only exaggerated the navigational problems I was experiencing.

Overall, I see Diluvion as a spectacle first and a game second. It’s wonderful to look at, listen to and experience. You could easily get lost in this subterranean adventure, but the lackluster controls and repetitive gameplay chip away at the luxurious coat of paint, and you may start to forget about those few fascinating moments of tense exploration. Whilst it is a competent experience and offers some fresh new ideas, you may find yourself bogged down by some of the game’s less polished attributes.