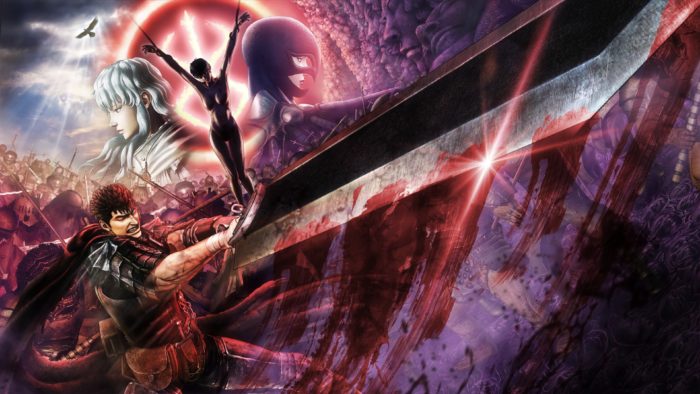 Berserk and the Band of the Hawk on PS4

Berserk has never been a series for the faint of heart. As the darkest desires of the hearts of man and demon come out to play, the manga and anime weave a violent tale through mature themes and seemingly endless gore. Seeing a person eviscerated as they explode into a mist of blood and sinew is as common as some cute character saying their catchphrase in some other anime. But Berserk has always been about more than just filling the screen with as much blood as possible in order to be the most violent offering around. That’s something Omega Force has tried to capture with their newest musou-style game, Berserk and the Band of the Hawk.

Berserk and the Band of the Hawk puts players predominantly into the shoes of Guts, a well-known mercenary who finds himself within an organized group for the first time and seeks the hope of normalcy and camaraderie. Unlike a large number of Omega Force’s games, you’re almost exclusively locked into Guts as you explore his transition from wandering warrior, to respected leader, to vengeful hunter during the game’s main story. At first, it seems like an odd choice to have the entire game centered on only one hero, but it translates into the mission structure and the balance of this game’s pacing.

There’s a slow start to Berserk and the Band of the Hawk. When you first start the game, you’re treated to a tutorial that sends thousands of enemies at you only for them to be cut down with ease. It’s a glimpse into the power that you’ll gain much later on, but it’s a taste that hooks you with intrigue. Right after that short mission, you’re thrust into the very beginning of Berserk’s story, as Guts completes yet another battle for yet another nation all for a bit of coin. The speed, power, and fanfare of the tutorial are gone and you’re starting from scratch as a young man with an impossibly large sword.

It’s a bit jarring at first, going from absolute power to a slow moving behemoth, yet it perfectly captures the beginning of the manga that fans read oh so many years ago. Combat is slow, but it never feels out of place in Omega Force’s brand of games. There are still countless enemies on the screen, all of which burst into vibrant spurts of blood as your sword cuts and crushes everything in its way. There’s a strong sense of purpose in every swing, and Guts’ lack of speed allows you to really examine the battlefield, seeing the endless string of monsters (both human and otherwise) as they pour towards you, seeking nothing more than to cut you down.

I will admit that during those moments in Berserk and the Band of the Hawk where I was completely surrounded, I felt like I was in the grand battles of the anime. The odds seemed impossible, but nothing could escape Guts’ blade. However, it was also during these moments where I realized how entirely safe the game was, and that was certainly an unexpected letdown

As I mentioned before, Berserk is not a series for the faint of heart. If hyper-violence isn’t your thing, or you have a strong aversion to demonic enemies, sexually explicit imagery, and torture, it’s not an easy thing to watch. However, it’s those elements that made the prospect of a musou-style game set in this darkly beautiful universe so tantalizing. Well, maybe not so much the sexually explicit imagery, but definitely everything else that revolves around murdering droves of evil in the most violent ways possible. Yet the gameplay, which carries the pacing and purpose of Guts perfectly, never really gets across the nature of the series as a whole.

Sure there’s blood and violence, but it never feels like anything as extreme as what you see in the series the game is based on. In fact, last year’s Attack on Titan, also from Omega Force, did a much better job of translating the extreme situations on screen into the gaming experience. Looking at both anime translations from the same developer makes the lack of Berserk’s real soul truly stand out. What makes it even more apparent are the game’s shining stars, the story and characters.

As you play through the game you’re treated to scenes before, during, and after missions. These are a mix of clips from the anime and films, as well as some original in-game cutscenes. Through these short clips, you can see the world that fans were clamoring for in the game. It’s full of hatred and ugliness as greed, vanity, lust, and more take over the hearts of men and women. The misguided masses fall victim to the twisted minds that lead them, and the scent of death fills the air. The characters that inhabit that twisted world – the Band of the Hawk, the country leaders, the Holy Iron Chain Knights, the demon kings – all get a chance to revel in the spotlight. Being reintroduced to Serpico, witnessing the internal struggles of the likes of Casca and Lady Farnesse, or being charmed once more by Griffith are highlights to Berserk and the Band of the Hawk’s overall experience. Unfortunately, transitioning from an incredible scene that gives you every reason to be excited about the upcoming battle is met with a re-skinned, basic musou game.

Berserk and the Band of the Hawk suffers from a few technical issues as well. The framerate can stagger greatly if there are too many effects going on at once, and the camera, a known offender in many video games, will become your worst enemy at times, especially during large boss fights. Speaking of the boss fights, they don’t have the intrigue that you’d expect, and most come across as quite cheap. You’ll often find yourself simply pinned into a wall as you stare into the nether regions of some large, disgusting beast. There isn’t much finesse required in these situations, even when using characters who are built very differently from Guts.

The playable character variety is one of the strengths of Berserk and the Band of the Hawk. There aren’t many unlockable heroes, and not even all of them are good guys, but they each feel surprisingly unique. Helping to make it feel like you have far more options are the outfits you can unlock and equip to each one. These change attacks and abilities, often times making it feel as if you’re playing an entirely new character. You probably wouldn’t want to play through the story missions again after beating it, but you have plenty of reason to use characters other than Guts after beating the game thanks to the Endless Eclipse, a mode where you can delve deeper into an endless realm as you complete challenges and unlock rewards. It’s interesting and does provide a fight that should’ve been in the main story, but it still doesn’t change the overall feel of the game. It does, however, provide an endless challenge that tests your skills that I did enjoy.

Overall, Berserk and the Band of the Hawk provides the rich story that fans of the manga and anime will certainly appreciate. Unfortunately, the feel of the gameplay itself captures the unique nature of each character, but never feels like it shares the same soul as the series it’s based on. It’s a shame, because we’ve seen the developers do just that before, and this was another opportunity to bring a beloved series truly to life. Still, if you’re a fan of Berserk, you may find passing over this experience a tough endeavor. The manga is finally starting to make some progress, albeit slowly, and the story here certainly fills that void as the grand plot prepares for its next phase. If you’re just looking for a musou game to try out, though, there are better options out there.