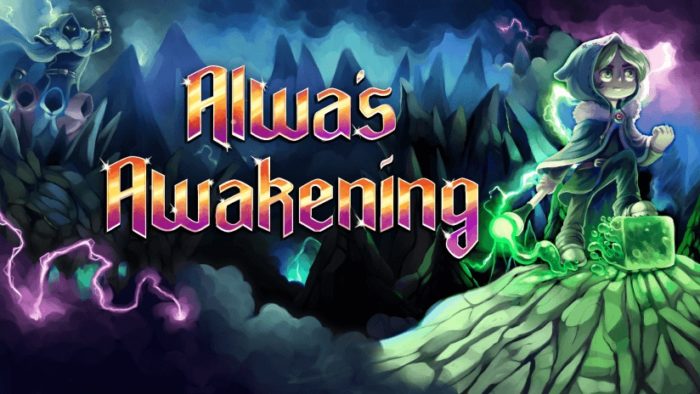 In Alwa’s Awakening, there is absolutely nothing surplus to requirements. Not only is every pixel in its right place, but every mechanic dances in step to the levels in a way that’s very pleasing. It’s a utilitarian approach that was borne of necessity – back in the late 80s and early 90s there was only so much you could do with the 8-bit real estate at your disposal – but here and now it’s a design choice, and in the absence of any meaningful additions, it’s one that feels blunted.

As set-ups go, this one’s vintage. Zoe is summoned from another world by the sorry souls in the ravaged land of Alwa. She is gently prodded by the forlorn village-folk to seek out four “protectors,” vanquish them, and bring down the dark figure of “Vicar.” It’s a classic premise that lays the groundwork for a classic structure. Four bosses lie in wait for your methodical brand of jumping, staff-waiving heroics before you go on to face the big boss.

In a nice nod to classic NES game Solstice, you wield a magical staff. As you seek out gem stones to power it up, it becomes capable of conjuring a green block for you to use as a leg-up or a shield. Later on, it blows a bubble for you to stand on and float upwards, and towards the end, it fires bolts of lightning at your foes. The staff, in conjunction with that most stalwart of allies from the golden era of platform games, the jump, will allow you to do battle with your foes and navigate some gently-challenging puzzle rooms. We’re talking keys, magic relics for you to find, front-armored foes to leap over and club in the back – all the staples make a return.

There is a satisfying click to each room you shuffle through, a moment where everything falls nicely into place. Each puzzle solution is one gleaned from being meticulous, and though you’re likely never going to be stumped – and therefore never elated when the light bulb in your head flickers on – there is a reassuring sense of relief that washes over you when everything is in its right place.

It’s a game made by a small, four-man Swedish studio called Elden Pixels, and one that doesn’t contain an ounce of cynicism or irony; it’s made by retro enthusiasts who genuinely want to relive the glories of yesteryear. On the game’s Steam page, it is billed as a “retro game in a modern coat.”

This doesn’t ring true. That modern coat is nowhere to be seen; in fact, a modern coat would be good because after long enough playing, you’ll be left cold. You’ll run into problems that were always present in adventure games back then – but perhaps only visible through hindsight. It will get repetitive; it is formulaic; and you’ll likely have to fumble with maps and keys. These are to be expected, if not enjoyable. But you’ll run into a newer, far more potent problem: it isn’t doing anything new. Now I dare say Elden Pixels didn’t set out to break new ground, but when you’re playing a game that’s leapt from the ether of a thirty-year divide, it doesn’t matter how unapologetic that game is, its merits won’t be bolstered for merely making the journey intact.