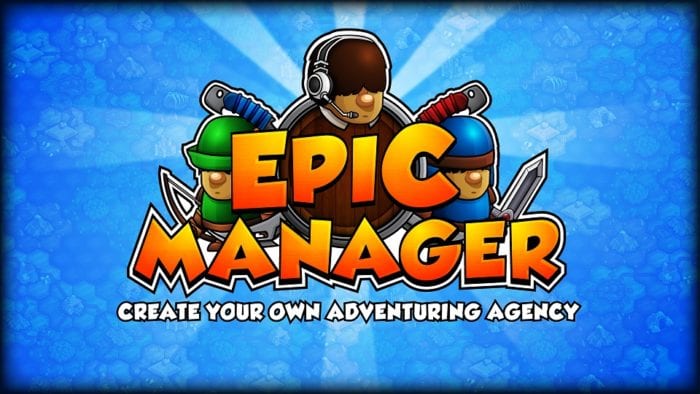 When I first approached Epic Manager during its Early Access phase, I was pretty impressed. The unique blend of RPG and sports-management simulation was an interesting approach, and one that worked pretty well despite its many moving parts. The time is upon us now for the full release of the game, and I’m happy to report that much of what I said before still stands.

Epic Manager is a curious approach to the management genre, putting players in control of an adventuring agency that’s not only trying to recruit heroes and defend the realm, but also competing against rival agencies for glory. Players have control over their parties of heroes as well as larger-scale aspects of the agency that hires them. You’ll have to manage funds, keep an eye on the competition, and complete quests in order to grow your fame.

Fame is arguably the most important of Epic Manager’s many pieces. As the basic metric by which your agency’s overall success is measured, you’ll have to increase your fame as much as possible to remain afloat. The league is built with a starting pool of twelve competing agencies, all of which have three 12-week trimesters to leave their mark. At the end of each trimester, the two lowest-ranked agencies are eliminated from competition; if you’re one of them, that’s game over.

Aside from fame, Epic Manager also tasks players with keeping track of plenty more. Heroes will need specific direction, both on the world map and in combat, in order to succeed. A variety of classes keeps the mix of heroes interesting, and a pretty robust equipment list lets players edge things in their favor. Heroes can level up, learn new skills, and even multi-class into new roles as they grow stronger.

Though managing your heroes is the nitty-gritty, Epic Manager’s real focus is on the big picture. This means keeping a watchful eye on your agency’s funds, the contracts made with heroes, and playing the political game to keep up with the other agencies. Scout points allow players to place portals on cities they’ve visited, uncover new quests, recruit heroes, and engage in inter-agency espionage to win the struggle for fame and fortune.

It’s worth mentioning that, while the meat of the game hasn’t changed, Epic Manager has been polished up a bit since the Early Access look back in August. Smoother animations and some tweaks to combat are the most noticeable changes, with minor bug fixes and expanded equipment lists filling out most of the rest. It was a solid game even back then, but the updates have been a great way to keep it running nicely.

The one struggle that Epic Manager has is simply the fact that there are a ton of things going on. The map screen has a lot of information packed into it, and while a brief tutorial does a great job of going over the basics, it can still feel a bit overwhelming at first. That said, the team over at ManaVoid has done a fantastic job of making it accessible, and an in-game “Epicopedia” offers in-depth explanations for those who need it.

All told, Epic Manager is a great fusion of two genres that I wouldn’t otherwise expect to go together. The complexity of its underlying systems is well-masked by the ease with which players interact with the game, and there’s plenty of replay value with so many different paths to choose from to help your agency succeed. Epic Manager is available now on Steam for a pretty fair $17.99.