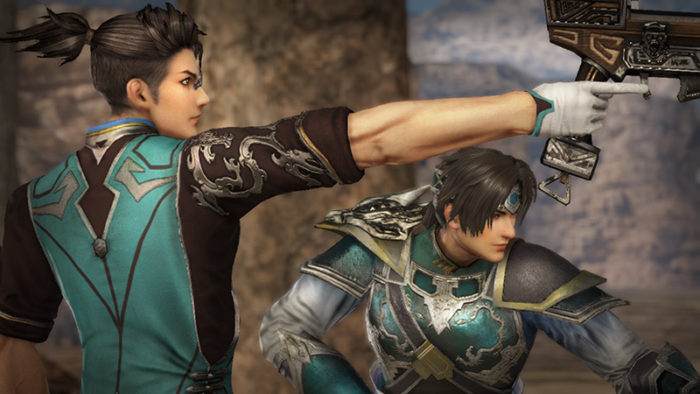 With my forces surrounded from all sides by enemy combatants, I found myself ensnared in the enemy’s ambush. With my objective now changed from secure the castle to run for my life, this surprise move by my opponents taught me an important lesson about how unpredictable battle really is. This is Dynasty Warriors Godseekers, a tactical turn-based game that has an impressive amount of surprises up its sleeve. While not a perfect game, there is enough depth and nuance to keep strategy fans occupied.

The big change in Dynasty Warrior Godseekers is the noticeable shift in both genre and perspective for how the action is viewed. Instead of being a third person hack n’ slash title like most other games in the series, developer Omega Force has raised the camera to an overhead view, and opted for a tactical turn-based style. The game still embraces its roots though. You’re going to slaughter hordes of enemies with a single attack and the story still weaves together with real life events.

One of the most surprising aspects of Dynasty Warriors Godseekers is the story which is far more coherent and engaging than previous entries. Instead of simply offering players the ability to experience real life battles, Omega Force smartly leans into the over the top antics that have always been a part of this franchise. The story follows childhood friends Zhao Yun and Lei Bin who accidentally free a mystical being called Li Xia after a scuffle with local rebels. While her purpose is left intentionally unclear at first, both of the young men soon discover that a variety of magical orbs have been scattered all throughout China. These powerful objects have the ability to cause incredible devastation, thus Li Xia has tasked the duo with retrieving them before they fall into the wrong hands.

By having a central narrative and characters, Dynasty Warriors Godseekers always has a sense of urgency to both its combat and campaign missions. The mystical powers work nicely with the various insane moves they can perform in combat and it helps justify why five heroes can take out entire battalions of units. Yet, there is always a pleasant mix of real world politics between the various factions you’ll encounter that lends more depth to each of the ten chapters. Every leader has their strengths and weaknesses, with many of them having complex relationships between each other. They’re in this war for themselves and watching the lengths they’ll go to achieve their motives is quite fascinating.

Dynasty Warriors Godseekers boasts an impressive amount of story and side missions for players to complete during their journey through Ancient China. It can take upwards of 40 hours to finish the main campaign, let alone complete the many alternative battle scenarios that each region offers. These missions have a surprising amount of variety to them, with some levels requiring you to defend a besieged castle for 15 turns while another tasks the player to escort someone to a safe zone.

The mission variety is enhanced by the game’s massive roster of characters that players can choose from before going into combat, each with their own unique weapon and fighting style that captures that hero’s personality perfectly. Chen Gong, a cunning military strategist, has a move set that consists of him calling in different types of soldiers to fight for him. Players can have up to five units in a party and you are not required to have the main heroes present when completing side objectives.

These hero-officers are incredibly powerful and players are encouraged to use them strategically. They can attack multiple times per turn and hit more than one enemy unit at a time. You can also take advantage of position (a strategy RPG staple), and receive a damage bonus if you decide to either attack an enemy from the side or from the rear. So will the enemy though so be on your toes defensively too. However, the most powerful ability that players can utilize is called the Synchro Attack which allows players, after killing a set amount of enemies, to effectively take an extra turn and unleash a flurry of powerful moves.

The officers you use during the actual campaign are fairly pre-determined, which can cause some annoying moments since they will almost always be slightly under-leveled for the current mission. In order to help them succeed in a specific chapter you’re encouraged to level them and spend precious resources to ensure their survival. The problem is these characters won’t be officially unlocked for use until after that specific chapter is complete. Meaning, you can dump thousands of gold into upgrading their gear only to have them vanish from your roster. While I’m all for the game wanting players to experiment with different characters, it doesn’t warn you in any capacity that you should save your money and just upgrade your regular-use officers instead.

Adding to that frustration is that the friendly A.I. for Dynasty Warriors Godseekers is not particularly helpful and can sometimes cost you the entire battle. Most of the friendly A.I. units can deal a fair amount of damage, but they usually end up charging recklessly at the enemy with little regard for their own safety. Given that many of the main campaign levels will end if a specific character is killed, this can create a ton of headaches as it forces you to babysit them when playing. In one memorable moment, I had to escort a unit through hostile territory, only to have him refuse to move and try to take on three enemy officers at once. He was killed almost instantly, which forced me to replay the 20 minutes I had just spent trying to finish that specific level.

Outside of combat, units can be upgraded via a massive skill tree that offers a variety of different passive bonuses such as receiving 10% of your health at the beginning of each turn or having 30% extra Critical Hit damage. Players can only equip three primary skills at a time, which will force players to synergize their parties abilities to compliment one another. Items and rare weapons can be purchased, upgraded, or acquired via the Merchant or after finishing a mission. While new weapons can sometimes arrive at a rather slow rate, Dynasty Warriors Godseekers overall had a nice sense of progression to it that always felt rewarding.

Yet the biggest issue with Dynasty Warriors Godseekers actually comes from the way it looks, as the game boasts some less than impressive graphics. While the cutscenes look nice, the actual in-game graphics are sub-par at best with character models and environments lacking any real detail. This goes for the animations as well, with many of the moves looking janky with no fluidity to combining multiple attacks. The special move “Giant’s Throw” by Zhang Fei will sometimes not even animate properly, causing the character to spin in a circle wildly while holding on to nothing. It breaks the immersion and is a very noticeable flaw.

If you can look past these issues though there is a lot of fun to be had in this strategy game. Despite having some wonky A.I. and lacking a coat of polish, the moment to moment gameplay is engaging. This is not only thanks to the massive roster of officers to pick from, but the wonderful variety of missions offered to players. While the genre switch may not appeal to all Dynasty Warriors fans, the soul of what has made the franchise so memorable is there.