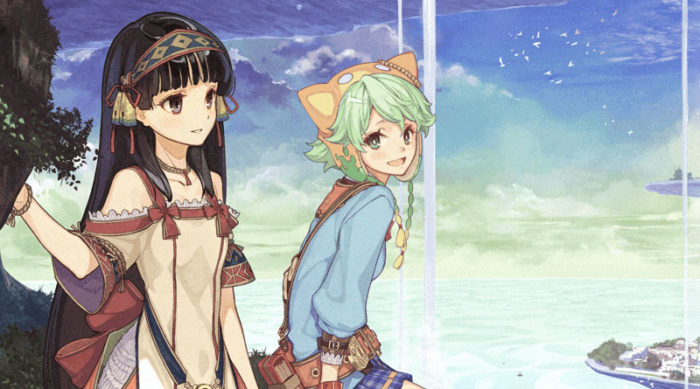 Atelier Shallie Plus: Alchemists of the Dusk Sea on PS Vita

You kind of know what to expect each time you dive into an Atelier game. Every entry follows the developing story of a young woman who learns more about the world, and grows into a strong figure who ultimately gains the confidence to support herself without having to rely on anyone else. Gameplay-wise, every entry will task you with crafting potions and substances using your alchemy skills, and hunt for ingredients while fighting enemies on the world map. Yet, as similar as all of these games are, you can never quite escape the charm that the Atelier series exudes. Atelier Shallie is no different, and it just might be the strongest game in the Dusk trilogy.

There are two protagonists this time around: Shallie (full name Shallistera), and Shallie (full name Shalotte). The former is the head of the Lugion village, and she’s journeyed to the town of Stellard in search of a solution to the drought problem back home. The latter is a largely unemployed young girl who picks litter off the streets for pitiful sums of money. Both girls are trained in alchemy (of course), and they each have their own personal story arcs for players to follow.

After a brief prologue, you’ll get to choose which protagonist you wish to control for the remainder of the game, though both Shallies will eventually meet and work together a couple of chapters in. While their individual stories and motivations are quite different from each other, the bond and friendship that these two girls develop over the course of the game is the real highlight of the journey. Their backgrounds are wildly different, but both Shallies share that same drive and passion of wanting to become a strong, supportive role model for their respective hometowns. Both girls want to make something of themselves, and it’s that very earnestness which makes Atelier Shallie so damn endearing. The rest of the character cast is no slouch either, and each is complete with their own distinct personality that adds color to the story.

While the game’s original PS3 release felt like a letdown when it came to the main story arc, Atelier Shallie Plus makes a good attempt to mend things on that front. As the concluding chapter to the Dusk trilogy, Atelier Shallie didn’t offer very much in the way of answers to lingering questions that were brought up in the past two entries. With the updated Plus version of the game, however, Logy and Ayesha do finally make a proper appearance in the game, and some of the major story events have been tweaked quite a bit to offer some much-needed closure. With Logy and Ayesha’s inclusion, Atelier Shallie Plus comes packed with tons of new dialogue and events that add a lot more to the story. These two characters don’t feel shoehorned in, and they certainly have important roles to play in this concluding chapter. It isn’t perfect, but it’s definitely a welcome addition that probably should’ve been in the original game in the first place.

Atelier Shallie also continues to build upon the fantastic combat system that Gust first introduced in Atelier Escha & Logy. With a full party of six, players can swap out members in the front and back rows to mix up combat strategies in tougher battles. Characters can build up their Burst meters with subsequent attacks, and even perform assisting attacks when the time is right. The combat can feel a little static and stale in the first chapter, but it quickly opens up as you progress through the story and recruit more characters into your party. Make no mistake; Atelier Shallie’s combat is fast-paced and exciting, and it really shines when you get to boss fights and other key encounters.

The alchemy system itself remains a delight, as usual. The crafting and mixing components of the game are very deep, and requires a good knowledge of your available resources to master. The Shallies’ proficiency with alchemy will rise the more you practice, and figuring out the best recipes and combinations for your concoctions is still as fun as it has been in previous games.

Unfortunately, Atelier Shallie does falter a little when it comes to micromanaging every aspect of Shallie’s life. In past entries, there were time limits imposed on the main characters, and players would have to choose between venturing out to the world map to fight and gather ingredients, or staying in town to polish up their alchemy skills. Even traveling from zone to zone on the world map would take up time, and a big part of the fun in the Atelier games came from carefully managing your time and making sure you could meet your task deadlines safely.

All of that is still gone in Atelier Shallie Plus. Players are still allowed to engage in combat and alchemy at a leisurely pace. While it does make the game feel a bit more freeing in a sense, Atelier Shallie also feels like a much less challenging game because of that. With the deadlines in past Atelier games, you often felt like you were actively working towards an important goal each month, and every action that you took had to contribute to you meeting that goal. If you could complete your set task early, you were afforded more time to pursue other interests you had in the game, which came with a very satisfying sense of relief. You won’t find that in this latest entry. Some fans will love this change, but I, for one, did not particularly appreciate it.

As with past games in the series, the character models themselves are wonderfully detailed and are always a pleasure to look at whenever they’re on screen. Both Shallies are uniquely designed, and their clothing choices are lovely and intricate. It’s a shame, then, that the rest of the game still looks dreadfully boring, especially when compared to the outstanding character models. Stellard is meant to be a holiday resort-esque seaside town, but its color palette is terribly dull and quickly becomes tiring to look at.

All in all, though, Atelier Shallie Plus is a fantastic package that fans of the series definitely shouldn’t miss out on. If you were sorely disappointed with the main story in the original PS3 release, Atelier Shallie Plus is a good attempt at making amends and closing things out in the Dusk trilogy. Even if you’re a newcomer to the series, the story here is easy enough to follow on its own without much need for prior knowledge of other games. Atelier Shallie Plus will almost certainly feel too easy for seasoned RPG fans, especially with the removal of the time mechanic, but it’s impossible to turn away from the game’s innocent charm and earnestness to show you that there’s always good to be found in the world. Yes, it can feel sickeningly sweet at times, but playing a nice, feel-good RPG every once in a while never hurt anyone.