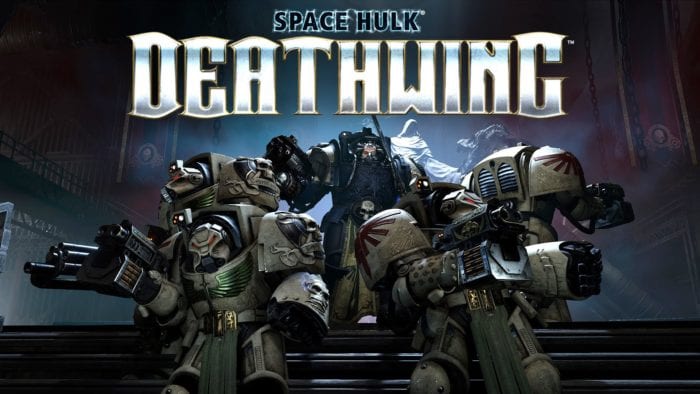 Set within the Warhammer 40,000 universe, Space Hulk: Deathwing is a frantic first-person shooter in which up to four players wander the claustrophobic hallways of a derelict Space Hulk, battling an array of Genestealer aliens along the way. It’s been on the radars for fans of the franchise for a while now and the fact that it’s finally available allowed aspiring Space Marines to dig into what is an enjoyable experience that isn’t without its flaws.

To start, the plot and the characters inhabiting it are, for the most part, quite forgettable and rather vague. This is partly because of senseless mission structures that merely serve as a means of getting you from point A to point B without much logical reasoning behind it. You’ll defend a point, push a wave, collect an item or scout an area that seems completely superfluous in the context of the story. It doesn’t hinder the gameplay experience, mind you, but if you’re paying some attention to the story, you’ll notice some objectives are utterly pointless, especially for a massive Space Marine like yourself.

Its stellar execution with epic cutscenes and badass character design, however, are most definitely not forgettable. You take on the role of a Librarian in command of a small squad of secretive Space Marines known as Deathwings, the First Company of the Dark Angels Chapter. Librarians are Space Marines that can use Immaterium, allowing them to warp from one place to another, as well as unleashing powerful psychic abilities upon their foes. Their incredible skills make them respected soldiers among Space Marines, and that’s why you are sent to explore this newly discovered Space Hulk. Now, what is a Space Hulk exactly? It’s an accumulation of debris and space ships, often holding valuable treasures and information. Space Hulks vastly vary in size and threat level, but the one explored in Space Hulk: Deathwing is a massive one. It takes cunning Space Marines to survive an expedition of this scale, because Space Hulks are frequently unpredictable, exposed to the vacuum of space, or house dangerous foes.

Everything in Space Hulk: Deathwing, from its heavily armored Space Marines to the various Genestealer mutations look bulky and meaty, and sound so menacing that it’s almost ridiculous. It’s all functional and very well fits within the lore of the Warhammer 40,000 franchise, however, keeping it from becoming too much. It’s a solid entry point if you’re not that into Warhammer 40,000, too, since it’s very much its own, isolated thing. It tells a more small-scale story and takes its time to flesh out its environments and motives, which is something I personally really enjoyed. Yet if you are expecting a lore-expanding entry of epic proportions, Space Hulk: Deathwing may disappoint in that aspect. 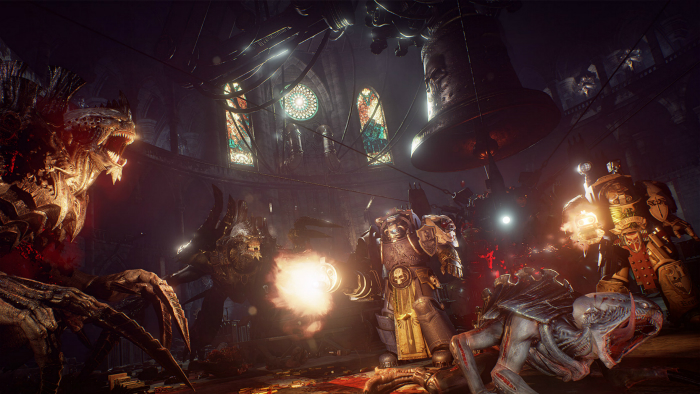 The most effective storytelling doesn’t come in the form of static transmissions or hidden logs, but it’s the massive Space Hulk itself that reflects a stellar sense of isolation and atmosphere, which is ultimately at the core of the entire experience. The sound of your heavy boots pounding the ground as the abandoned ship creaks overhead and steam pipes whistle in the distance is nothing short of staggering and engrossing, lending its more quiet sections of exploration a sense of thrill and, dare I say, even horror. It feels like the calm before a storm, interrupted abruptly by the shrieking of the enemy.

Naturally, it wouldn’t be a Warhammer title if it didn’t feature some viciously satisfying combat, and that is most certainly present in Space Hulk: Deathwing. When things get real, everything gets dialed up to eleven, with alien Genestealers swarming your position in maddening numbers. It’s in those situations that the power of Unreal Engine 4 really shines as blood squirts from every possible orifice and countless corpses pile up at your feet with different sources of light peering through the heads of the opposition.

In a matter of seconds, you go from exploring the Space Hulk’s claustrophobic corridors to pumping lead into a massive wave of Hybrids, Warriors, Broodlords and a plethora of other mutated Genestealers, or using your melee weapon of choice to separate their limbs from the rest of their grotesque bodies. Stray bullets crack monitors, ignite steam pipes or cause electrical cables to spark impressively without ever pulling your attention away from what it is intended to be on. It’s not until the eerily silent aftermath that these little details become noticeable, giving a whole new meaning to the numerous Space Marines that lay on the floor aboard this Space Hulk, gutted and ripped to shreds in hallways covered in blood and destruction.

While Space Hulk: Deathwing does look impressive when it wants to, textures tend to look a bit muddy even on the maximum settings when closely inspected. Run up to a wall or bump into some waist-high objects around you and it becomes noticeable that everything looks disappointingly bland. It sure is a shame it doesn’t always look as crisp as it could have, but you wouldn’t even notice that unless you’re actively looking for these shortcomings. The atmosphere effectively draws your attention away from the game’s less impressive features as areas drenched in blood and guts will make you want to look the other way, but that’s not to say it always looks perfect.

Speaking of its visual fidelity, I found that Space Hulk: Deathwing didn’t always perform as desired. Running this on a GTX 970 with an i7-4790K and 16GB RAM, I expected this game to run smoothly, especially considering some of its lesser textures. However, environmental effects can take their toll on your system. Upon switching everything from it’s maximum settings to high, there was a noticeable increase in performance without sacrificing too much of its visual depth, but frame rates can drop occasionally upon entering larger, more open environments or when a whole lot of things are happening on the screen at once. 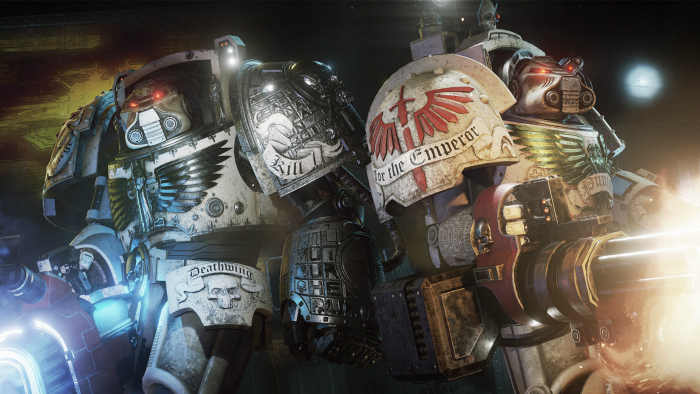 Helping to pull attention from the sometimes troubling performance are the marvelous, albeit slightly familiar, weapons and skills Space Hulk: Deathwing puts at your disposal. There’re about a dozen weapons you can find and unlock, and while the standard Storm Bolter and Force Sword are quite versatile overall, experimenting with this arsenal is a blast. Rushing into battle with the Thunder Hammer and Storm Shield makes you an impenetrable force in battle, whereas the Heavy Flamer or the Storm Cannon can make short work of large crowds if you keep your proper distance. Every weapon hits with the expected force, and you are free to customize your Space Marine’s loadout to optimize your preferred playstyle.

The Librarian’s aforementioned psychic abilities can also be used, letting you electrocute, combust, or push back the opposition, just to name a few. Up to three abilities can be assigned at once with only a minor cooldown, encouraging exploration to uncover which psychic combination works best for you and the weaponry you’ve selected. Most weapons and abilities are unlocked by completing story missions, whereas other skills can be obtained by investing in skill trees at the end of each level. These are largely passive bonuses that won’t make that big of a difference initially, but as you level up more, their uses and the way these complement each other becomes a bit clearer.

Every level takes place on a different part of the Space Hulk, and there’s plentiful areas and corridors you won’t come across when you simply follow the objective. Hidden relics and transmissions are scattered throughout each section of the Space Hulk, encouraging you to explore every inch of it if you consider yourself a true completionist. Replaying levels with up to three friends doesn’t feel as dull or repetitive as it does in most games since the maddening number of enemies each wave will keep you on the edge of your seat. When you’re chasing the whispers of a relic on your own while your teammates venture down another path, however, it will likely result in your death as countless enemies charge your position, leaving you with an empty clip and an exposed back.

It’s surprising how thoroughly I ended up enjoying Space Hulk: Deathwing. Its bulky, typical Warhammer 40,000 design is noticeable throughout, even though it implements a welcome sense of atmosphere that is rather rare within the franchise. Incoherent mission structures, some muddy textures, and unsteady performance issues may drag the experience down a bit, but its glorious action more than makes up for that, packing the expected punch with a wide arsenal of phenomenal weapons at your disposal.