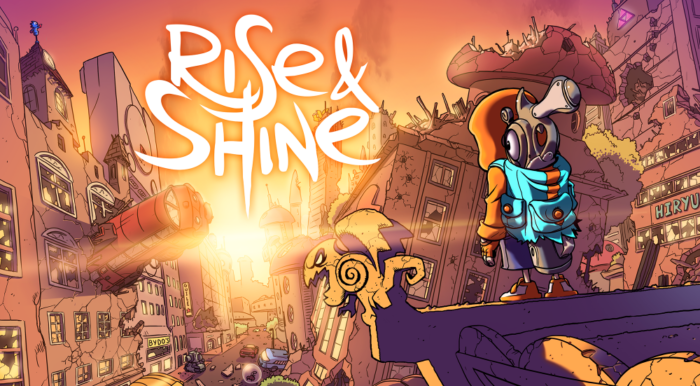 Rise & Shine is the latest game from Adult Swim, developed by Super Mega Team. It may look like your everyday action-platformer on the surface, but in truth, Rise & Shine cleverly plays around with its mechanics and setting to make for a pleasantly memorable experience.

Right from the get-go, it’s easy to see Rise & Shine takes heavy cues from the world of video games. The entire adventure revolves around the titular Rise, a young boy who must save Gamearth from a Nexgen alien invasion. Early on, you’re given Shine, a sentient gun that once belonged to a Legendary Warrior bearing a striking resemblance to Link from The Legend of Zelda franchise. While it’s uncommon story and the inhabiting characters are most certainly enjoyable with witty, well-written dialogue, it’s the ludicrous environments that bring it all to life.

Every single frame of Rise & Shine is filled with references to other video games, sometimes subtle and sometimes otherwise. You come across the aforementioned Link lookalike, some Tetris artwork on a waist-high balcony, a destructible Q-Bert statue and Solid Snake carrying a cardboard box, alongside many others within just the first half hour of play time.

These references usually aren’t as glaring as they are in most other titles that take a similar route, but instead are effectively hidden in plain sight. I found myself taking a break every once in a while to dissect the screen, scouring through the gorgeously drawn environments in search of a hidden Easter egg or two.

It’s likely, however, that the action will keep you so occupied you won’t notice its subtleties at first glance. Rise & Shine is a platformer at its core, but it takes heavy inspiration from bullet hell titles and shooters in general, blending the mechanics of its puzzle solving and the frantic action in an effective, lively way.

Rise can duck behind cover to avoid incoming fire, leaning out occasionally to blow the enemy to bits. Different types of bullets and separate bullet add-ons allow for an impressive amount of variation that in time turns every combat scenario into an action-heavy bit of puzzling.

One add-on, for example, lets you control a bullet within range of a remote control. This can be the RC Rise carries with him, or one of the many scattered somewhere throughout the levels. Bending bullets can make tougher encounters a bit easier as you flank the enemy’s cover and shoot them in the neck, yet combine a handful of add-ons with an equal number of bullet variations like the shock bullet, and you’ve got yourself a one-frame sandbox to play around with.

Even outside of combat, Rise & Shine’s themes remain strong. Solving puzzles is done by firing bullets to some degree, albeit to trigger an explosive to clear the way or charging a battery to open a gate. What it does so well is making its action and platforming flow and sometimes overlap, meaning there’s never a dull moment to be had. One minute you’re shooting some soldier in cover by curving your bullets, and the next, you’re frantically hopping over explosive barrels. Its momentum remains high without ever feeling too crazy, which could have been a major turn-off for those who don’t typically enjoy bullet hells.

Rise & Shine gradually throws new enemy types, add-ons, and bullet variations at you to keep the experience fresh and engrossing. You’ll rarely be doing the same thing twice in a row, and as soon as you’ve grown more comfortable and skilled with certain abilities or enemy types, the game throws another unfamiliar obstacle your way. Because of its rather steep difficulty, do expect to die quite a few times in Rise & Shine.

While it’s rarely punishing, this project does have a rather steep learning curve. At first you’ll be struggling with firing your gun effectively, and along the way, you learn to use Shine to its full effect. There are no true moments of breathing room between action to practice abilities, but Rise & Shine pleasantly expects you to do so anyway. It never holds your hand and explains its newest additions with a brief message and a small introduction, but from that point onward, learning how to make due with the variations is all up to you.

Some enemies have specific weak spots or are more vulnerable to specific bullet types, encouraging you to experiment with each scenario until you’ve found the ideal solution. There’s the aforementioned degree in freedom as to how you tackle action, mind you, but there are usually ways that are more effective than others. You can take cover and blast away at flying drones, for instance, but the more efficient player would curve an electric bullet to hit ’em where it hurts. There’s an odd sense of gameplay freedom in regards to its combat, a most welcome addition for a game that only exists in two dimensions.

Its platforming sequences and puzzles can be fairly frantic, which may not appeal to all audiences. During one early encounter, you must dodge enemy grenades whilst curving your bullet, taking out the grenadier to clear your path. I personally adore how it blends these two mechanics that are often seen as opposites, blurring the line between all-out combat and challenging puzzle-solving. However, if you like to take your time with a specific issue to analyze it to its fullest, Rise & Shine doesn’t always allow that.

To put it bluntly, I cannot wait to get my hands on the full version of Rise & Shine. It’s an action-platformer that delivers heart and personality without sacrificing stellar gameplay. Everything that’s there fits, against all odds.