With PlayStation VR having been available for nearly two months, early adopters are likely to have played most of the launch games and will be looking for a new experience over the holidays and into the new year. Just in time for the winter season, Psytec Games has released Crystal Rift, a game heavily influenced by old dungeon crawlers, playable both with and without VR. Unfortunately, a host of problems in and out of the virtual reality headset means it is unlikely to be the game you show off to your family over the break.

Crystal Rift should initially appeal to anyone that was a fan of games like Dungeon Master or Eye of the Beholder. It is a first-person dungeon crawler with grid-based movement and combat. The player navigates their way through a series of dungeons, solving puzzles, opening doors, and finding items. That all sounds promising but visuals, movement, combat, and overall design are problems in VR and standard play. 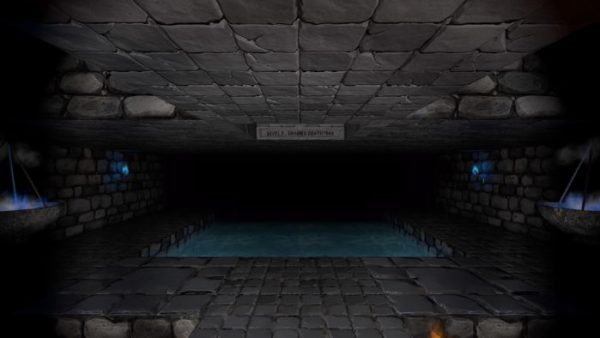 When using VR, Crystal Rift is certainly at its best; the dungeons feel quite claustrophobic and the creaks and groans of the ominous corridors can be intimidating. However, from start to finish, the game is fairly ugly. Almost every room looks the same, poorly textured grey bricks make up the surroundings, and the enemies you come across can be pirate-skeletons or see-through variations of Slimer from Ghostbusters – they certainly don’t match the horror tones Crystal Rift is clearly going for. They aren’t difficult to defeat either, since every enemy moves and attacks in a particular pattern without change. Skeletons swing their swords every few seconds, giving you enough time to move a step forward, attack, then retreat one step, until they disappear. Enemies act as nothing more than something extra to see whilst exploring the dungeons.

Exploration also isn’t great in VR as you can hold down any directional button to move fluidly around the grid-based map. This is fine when playing without virtual reality, but can cause motion sickness when using the headset. To ensure the experience is at least comfortable, you need to move slowly, one step at a time, looking in the direction in which you want to head. When the more complex and interesting puzzles are introduced later on, the dungeons can be large, and slow movement can be frustrating.

However, problems are more numerous when playing without VR. The headset’s tracking function allows you to look around the dungeon when you stand still, but the standard mode removes this functionality. Therefore, if you imagine the squares that make up the grid you move in, you cannot see the one you are standing on or the one in front of you due to the restricted field of view. This is mainly an issue when faced with puzzles that involve switches and trap doors. Standing in one place and triggering a switch will open or close a trap door, but if it is one close to you, you have no idea if it is safe to move across or not. This leads to a lot of guessing when exploring, but you won’t want to experiment too much because once you lose your five lives, you have to restart the entire dungeon. In the early areas that is fine, but in the longer, more difficult dungeons in the latter half of the game, it can be very frustrating. On the bright side, you can move quicker in standard play, which makes exploration easier, and retreading steps to find keys to open a series of color-coded doors can be a fun challenge. 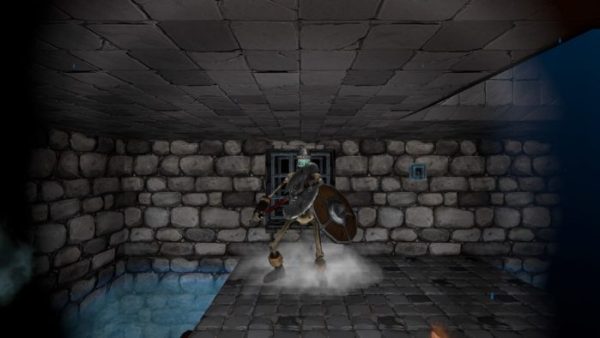 There also doesn’t seem to be a story in Crystal Rift. Notes that you find as you explore hint at the mystery of the dungeons, but there is little explanation as to why you are there or of the history of the setting. Shadows flicker in corners and eyes stare at you through bars, but their purpose remains unclear. One of Crystal Rift’s positive elements is the ominous atmosphere it attempts to create through sound and lighting, but the music ruins that atmosphere throughout. The repetitive tunes will remind you of the queue music at a cheap haunted mansion, and it becomes annoying as the game progresses.

Crystal Rift features some interesting puzzles and may be simple and easy to grasp, but the poor visuals, easily manipulated enemies, limited field of view in standard play, and difficult virtual reality movement means it pales in comparison to the dungeon crawlers of old.